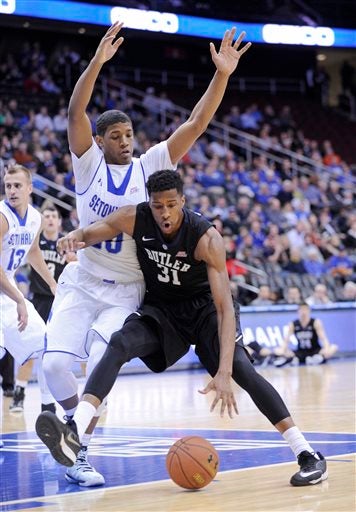 Dunham and Jones scored nine of the first 10 points in the overtime for Butler (13-5, 3-2 Big East), which blew a late seven-point second-half lead. Andrew Chrabascz added 12 points and Kameron Woods had 15 rebounds for the Bulldogs, who posted an impressive win over Xavier this past weekend

Sterling Gibbs led Seton Hall (13-4, 3-2) with 30 points before fouling out with 2:08 left in overtime. Khadeen Carrington added a career-best 20 points and fellow freshman Angel Delgado had 12 points and a career-best 15 rebounds in the Pirates’ first home loss.

Butler never trailed in the overtime, with Dunham putting it ahead 70-67 with a 3-pointer from the left wing with 3:49 to go.

Wood, who finished with nine points, stretched the lead to four points with a free throw, but Gibbs got Seton Hall back in the game with a 3-pointer with 2:32 to play.

Gibbs, however, picked up his fifth foul on the ensuing possession and walked off the court disgusted with the call. Dunham hit both free throws to push the lead to 73-70.

Desi Rodriguez scored on a dunk to get the Pirates to 73-72 but Jones hit consecutive layups and Woods added a free throw to give Butler a 78-72 lead with :08 seconds left.

A 3-pointer by Carrington with 6 seconds to play got Seton Hall to 78-75 but Jackson Aldridge iced the game with a free throw with :04 to play, his only point of the game.

Butler had a chance to win it at the end of regulation but Dunham’s contested shot from just inside the 3-point line fell short.

After Dunham and Gibbs each hit two free throws, Woods scored on a rebound follow with 29.5 seconds to go to give Butler a 67-65 edge. Carrington hit a short jumper in the lane five seconds later for the final points of regulation.