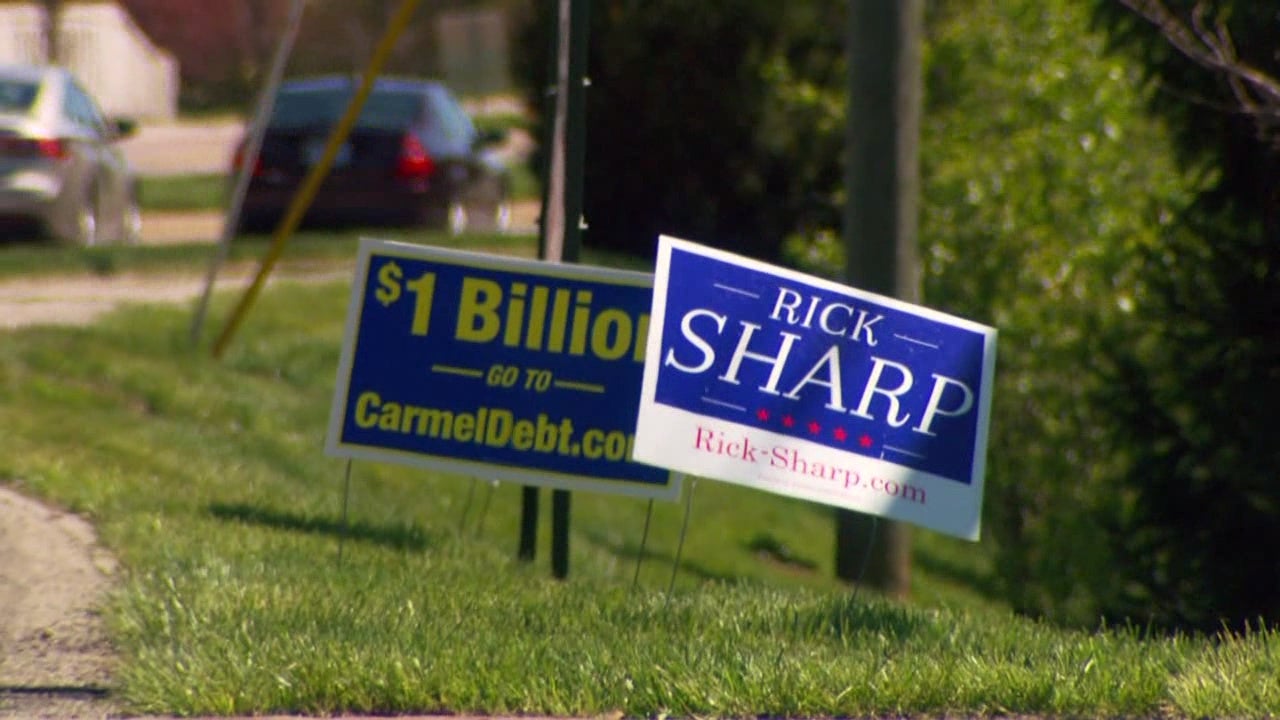 CARMEL, Ind. (WISH) — The race for mayor of Carmel features two Republicans with deep roots in the city. The incumbent, Jim Brainard, is campaigning for his sixth term in office. City Council President Rick Sharp wants to replace him.

They have one thing in common. Both expect to work very hard between now and the closing of the polls on Tuesday, May 5. Sharp says it will be “non-stop, frenetic activity” between now and then – at campaign events and visiting voters at their homes.

“I passed the thousand front porch mark either Friday or Saturday,” he told 24-Hour News 8. That’s so many houses, he’s said it averages out to about three and a half minutes per door. It can be a little longer, if the voters want to “engage” about the issues.

“I think people are focusing a lot more on the concept of the debt,” he said. “And the fact that the current structure for handling that debt by this administration is to kick the can down the road 12 to 15 years.”

Mayor Brainard will tell you he has heard it all before. “Each election, for the last three elections, my opponents have said the same thing and each time we lower our tax rates and move on down the road and continue to manage the city in a way that most people like,” said Brainard.

An organization called the Constitutional Patriots has a campaign sign designed to challenge Brainard’s management. It says the city has $1 billion in debt.

Brainard says that calculation is wrong. “It is not a billion. It is not even a billion, if you count all the interest.” Brainard’s office puts the number at $590 million. And, Carmel’s debt payments “are only 15 percent of our annual revenue.”

A lot of that came from construction projects such as the Palladium and other new downtown buildings. Some of it came from spending on roads and bridges.

“Communities that invest in themselves are ones that succeed. We would not have that Double-A Plus Standard and Poor’s credit rating, if we had too much debt.”

Sharp claims the Brainard campaign is “cherry picking what they wish to call debt. We’re focusing on what adults would focus on – the true amount that the city owes today.” He says the Indiana Department of Local Government Finance has a report that lays it out in black and white.

Brainard said he is optimistic about his prospects for success and he has “a lot of ideas” for what a next term could bring for Carmel – from more construction, downtown, to road improvements on several busy city streets. There is still room to grow in Carmel. And, with the notoriety of Carmel, he says “we can really make some strides, I think, in getting good jobs to central Indiana.

Sharp has proposals for jobs and growth. “It’s great to build bright, new, shiny things,” he said. “But, if we let our older neighborhoods decline into blight, we’ve created a whole new redevelopment problem for ourselves.”

Part of the challenge for both men, now, is to make sure people not only know about the Primary, but get out and vote. Sharp says “I firmly believe that we have a bright future ahead of us. I firmly believe that we need to change our policies to assure that.” And that’s why he says “I’ve started telling people: the best insurance for Mayor Brainard’s legacy is to elect Rick Sharp as mayor.

Brainard says “I love my job of running the city.” So, he can’t wait until the campaign is over.