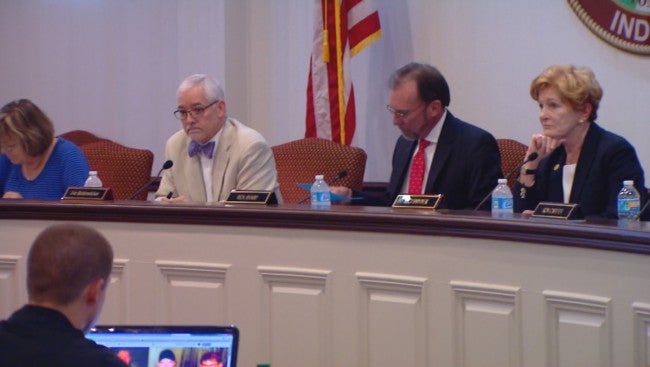 CARMEL, Ind. (WISH) — The Carmel City Council decided not to take action on an anti-discrimination ordinance.

Instead the council voted to keep the controversial measure in committee but not before nearly a dozen more residents gave their opinions.

The council president had made a motion to have the council vote on this Monday, but the council members voted 4-3 to keep the ordinance in committee for two more weeks.

That will give the public another chance to voice opinions, like those they talked about Monday.

Those in favor of a Carmel non-discrimination ordinance designed to protect the LGBT community showed up in full force at Monday night’s meeting.

Nearly a dozen spoke in favor.

Five other people signed up to voice an opinion against it.

They weren’t allowed to speak, since they spoke at the last meeting and no repeat speakers were allowed at the meeting for time reasons.

But, this is what one opponent had to say in August.

But those in favor argue attracting talent to Carmel businesses depends on making the area seem welcoming.

“It’s difficult to get people to come to central Indiana and it’s even more difficult when the public perception of Indiana is as negative as it has been since RFRA,” tech manager Bryan Everly said.

He’s disappointed the ordinance is still in committee.

“I think it simply needs to be passed as quickly as possible without an amendment,” he said.

Angie’s List Founder Bill Oesterle attended the meeting and said he understands the democratic process can be slow, but that he hopes it ends up passing in the end.

“I’m speaking in regard to the technology community,” he said, “This is one of the bright, shining stars of technology development in the state of Indiana and so it’s critical to the community in general.”

The committee will hold a special meeting in the next week to discuss the ordinance and then the full council will take it up again on Oct. 5.

There will also be more public comment at that meeting.