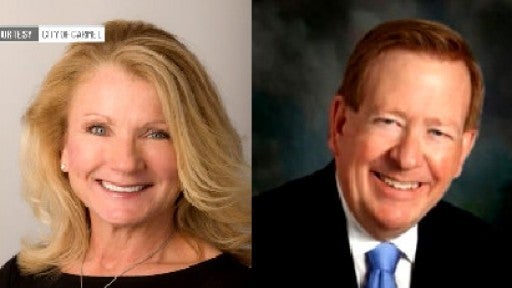 Carmel Clerk-Treasurer Christine Pauley said Mayor Brainard has made working with the city a toxic environment.

During a news conference Thursday Pauley went into detail about the timeline of events leading up to the accusations. She also revealed new information about her accusations that the mayor inappropriately touched her.

Pauley said it all started back in December 2015 at a Christmas party. That’s when she said he walked her to her car and allegedly forcibly kissed her and grabbed her buttocks.

“I said ‘No! This can’t be happening,’ and then I jumped in my car and then I left,” said Pauley.

In March 2016 Pauley said Mayor Brainard invited her to take a trip with him to Rome. She said no.

“That’s when I realized it was more than attending a professioanl conference, and that was not what I wanted,” said Pauley.

Then in May 2016 she said Mayor Brainard sent her sex toy emails.

“It made me feel dirty. But, I knew that he on many occasions there were drunk emails or texts to me and so I just ignored it and said no and pushed it away and said this can’t be happening. I’m just going to ignore it,” said Pauley.

In late May 2016 Pauley said Mayor Brainard also invited her to a cabin in Wisconsin. To which she said no.

Pauley said she brought things up now because she doesn’t want him to to target anyone else and admitted her timing was politically motivated as the primary election is two weeks away.

“We are electing the CEO of our city,” explained Carmel Clerk Treasurer Christine Pauley. “Back in 2016, we issued a quarter billion dollars worth of bonds within first six months. He had sole discretion how they’d be distributed.. project and who would be bidding… what projects first, second. It’s imperative that our CEO of our city is above reproach.The citizens of Carmel deserve to understand who they are electing. The type of character of our CEO. They deserve to know. He needs to stop. He needs to stop,” said Pauley.

News 8 reached out to Mayor Brainard. He denied the accusations. In a statement he released on Tuesday he said they briefly dated. Pauley, however, said they did not.