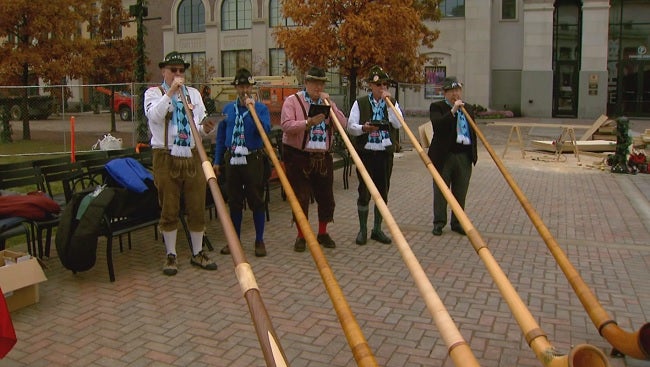 CARMEL, Ind. (WISH) — The City of Carmel’s new Christkindlmarkt and outdoor ice skating rink is providing a boost to local businesses with German heritage and wares.

City leaders held a special preview day Monday of the holiday square, set between the Palladium and Tarkington Theaters in downtown Carmel. The official opening date for the market and ice skating rink is Saturday, November 18.

Carmel city leaders say a day of fanfare is scheduled, including a performance from the Alphorn Group, a collection of four alpine horn players from Michigan.

“I’m a retired librarian,” smiled John Griffith, a member of the performing group. “I found my way to music after many years.”

Griffith explained how he and his friends organized a German band “just for the fun of it,” and watched it grow and diversify in members and instruments. When one member came carrying a near 12-foot wooden alpine horn, Griffith says he was initially worried.

“It was his fault,” Griffith laughed. “It kind of infected the band and now we have 12 of us in the band playing the alphorn.”

Griffith tells stories of playing for crowds as diverse as motorcycle gangs to rocks and trees in the woods. He says it’s been an adventure making “friends” with the instrument, and hopes to share that with people in Carmel.

“We hope when were playing here that we’ll have the opportunity to be about and around to take photographs,” he said. “And I have a lot of disinfectant and we’re happy to allow them to play the instrument and give it a try.”

Griffith and the Alphorn Group will play at the grand opening where business owners like Heidi Wernicke will share her heritage.

“My sister and I are of German descent.  My dad was born in East Germany in 1947 then immigrated to the US so we’re really excited to share some German sweets and make some people happy,” said Heidi Wernicke, co-owner of The Quirky Feather Confectionery.

Wernicke says while she and her sister don’t speak German, they cook out of their great-grandmother’s old German language cookbook published in 1902. She says she has her favorites but has prepared a feast for visitors.

Gingerbread is always good for the soul,” Wernicke said. “We have sweets of all kinds, gingerbread cookies and houses, spiced cookies with almonds, cinnamon stars, a waffle cookie with caramel in the middle.”

“I really want people to be able to walk away from the Christkindlmarkt experiencing another culture,” said Maria Murphy, market master and CEO of the Christkindlmarkt, demonstrating several of the market wares including a Bluetooth-enabled German music box, wooden ornaments and animals, classic nutcrackers, and custom Carmel, IN German souvenirs.

Murphy also explained several freebies associated with the event, including a drawstring bad for visitors who check in on Yelp!, Christkindlmarkt scarves for volunteers, and goody bags for children who complete the market’s scavenger hunt.