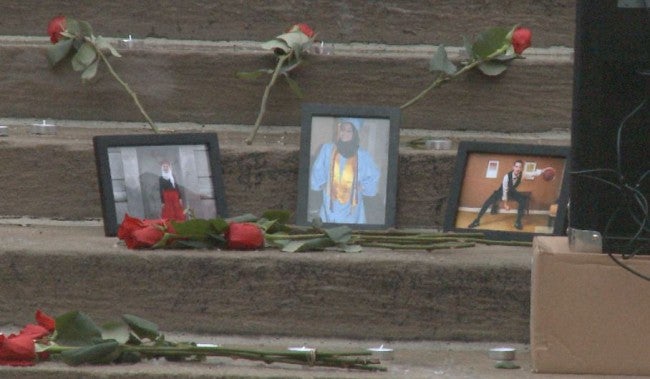 INDIANAPOLIS (WISH) – A candlelight and prayer vigil was held in downtown Indianapolis Monday night to remember the three Muslim students, who were shot and killed in Chapel Hill.

Some people in the Indianapolis Muslim community told 24-Hour News 8 they are feeling unsafe after the murders. They’re hoping that our city will be able to come together despite differences in religious beliefs.

People from all faiths gathered at the steps of Monument Circle to remember the Chapel Hill victims.

“I’m hoping that tragedies like these do compel people to step forward to meet their neighbors, to meet people that worship different than them or come from a different country,” said Charlie Wilse, Center for Interfaith Cooperation. “Learn about one another, learn about what our common principals are.”

The Muslim Student Association at IUPUI organized the vigil. Other organizations, including the Center for Interfaith Cooperation came out to show its support.

Despite the bitter cold temperature, the weather didn’t stop more than 50 people from standing in the cold to rally for what they believe in.

“I was born and raised in Fort Wayne, Indiana. I am an American citizen and I am proud of it,” said Haneen Anabtawi, Muslim Student Association at IUPUI. “The fact that at any moment, anything could happen to any one of us just because I wear a headscarf and I am Muslim. I am of the Muslim faith.”

On the heels of the Chapel Hill murders, police responded to a vandalism call at the Islamic School of Rhode Island. Meanwhile, in Houston, an Islamic Center was burned to the ground. Investigators believe someone intentionally set the place on fire.

People at the vigil are just hoping for some common ground at the end of it all.

“Negative things that happened in society are bringing people from all faiths. I even met a few atheist that were here, a few people that hated Islam before now have seen that it’s not a hateful thing,” said Nadir Mitiche, Muslim Student Association at IUPUI. “It’s great to see that people are able to adapt to the situation and it’s just really beautiful to see the support from everybody.”

The vigil lasted for more than an hour with several guest speakers. Members hope to continue spreading awareness and they’re praying for these crimes to stop.