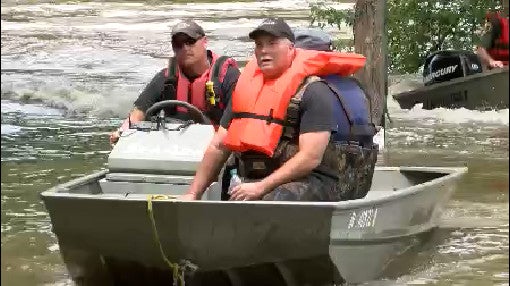 The water flow near the Oakdale Dam is well above flood warning levels, and the water doesn’t seem to be receding anytime soon.

Indiana DNR officials went door to door to check on residents that had not yet evacuated.

DNR’s District 3 Commander Lt. Dan Dulin says many residents decided to refuse help and stick it out in their flooded homes.

“We’d rather remove them now before conditions get any worse,” said Dulin. “But that’s still up to them.”

There were around 15 people in the area that did allow DNR to help. Howard and Linda Summers received help and brought their dog along with them. They say the worst part, perhaps, is not knowing when they will be able to return to their home.

“The way the weather sounds, it might be next week before we can get back in,” said resident Linda Summers.

In the meantime, the Summers plan to stay with their daughter.

“That’s what you get for living on a river,” Linda Summers said.

Dulin says the problem with people staying in their flooded homes is that overnight, it can get pretty dangerous. If the water continues to rise, you may wake up and find yourself in a bad situation. He says it would be safer for everyone, including the officers, if people would evacuate while DNR is out there and available to help.

Rescuing people from their homes was only one of the tasks conservation officers took on Tuesday.

“Currently, we have officers taking the NIPSCO gas teams to the flooded areas to turn off gas meters to prevent fire risk with the flooding,” said Dulin. “A flood is devastating, it ruins everything that you own. The water continues to rise, and there’s absolutely nothing that a person can do to stop it.”