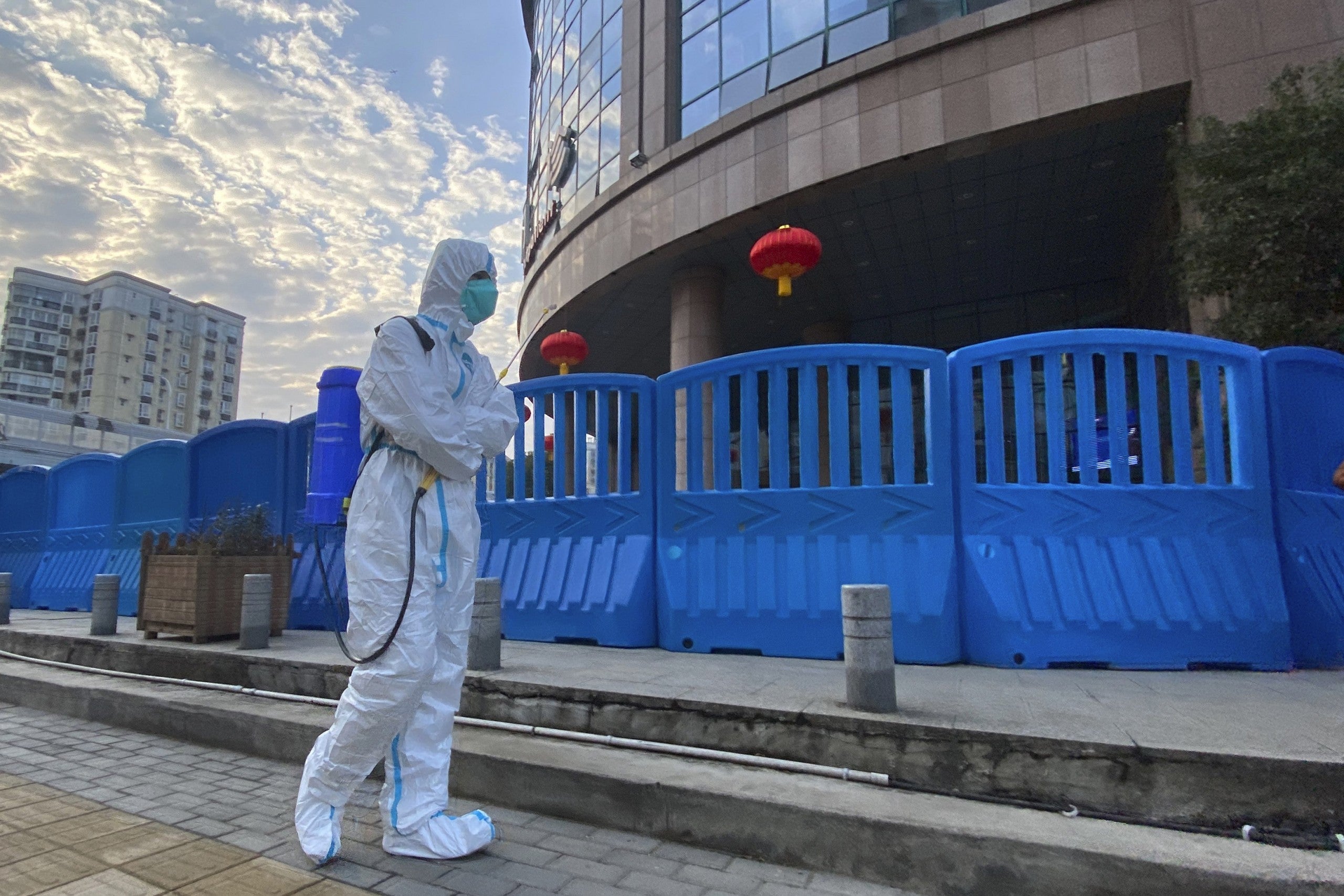 FILE - In this file photo dated Saturday, Feb. 6, 2021, a worker in protectively overalls and carrying disinfecting equipment walks outside the Wuhan Central Hospital where Li Wenliang, the whistleblower doctor who sounded the alarm and was reprimanded by local police for it in the early days of Wuhan's pandemic, worked in Wuhan in central China. A lengthy written report published Thursday March 25, 2021, from a team of international and Chinese scientists on a joint mission to Wuhan aims to help unearth the origins of the coronavirus since it was first detected in China more than a year ago. (AP Photo/Ng Han Guan, FILE)
by: Natasha Bertrand, Kylie Atwood, Katie Bo Williams and Zachary Cohen, CNN
Posted: May 23, 2021 / 10:22 PM EST / Updated: May 23, 2021 / 10:30 PM EST

(CNN) — A U.S. intelligence report found that several researchers at China’s Wuhan Institute of Virology fell ill in November 2019 and had to be hospitalized, a new detail about the severity of their symptoms that could fuel further debate about the origins of the coronavirus pandemic, according to two people briefed on the intelligence.

A State Department fact sheet released by the Trump administration in January said that the researchers had gotten sick in autumn 2019 but did not go as far as to say they had been hospitalized. China reported to the World Health Organization that the first patient with COVID-like symptoms was recorded in Wuhan on Dec. 8, 2019.

The Wall Street Journal first reported on the intelligence surrounding the earlier hospitalizations.

Importantly, the intelligence community still does not know what the researchers were actually sick with, said the people briefed, and continues to have low confidence in its assessments of the virus’ precise origins beyond the fact that it came from China. “At the end of the day, there is still nothing definitive,” said one of the people who has seen the intelligence.

Director of National Intelligence Avril Haines told lawmakers during the Worldwide Threats Hearing last month that “the intelligence community does not know exactly where, when, or how COVID-19 virus was transmitted initially,” an assessment that has not changed, said two of the people briefed on the intelligence.

The current intelligence reinforces the belief that the virus most likely originated naturally, from animal-human contact, the sources said. But that does not preclude the possibility that the virus was the result of an accidental leak from the Wuhan Institute, where coronavirus research was being conducted on bats.

The World Health Organization conducted an investigation into the origins of the pandemic and concluded in a report that the risk of an accident was “extremely low.” The report said there was “no reporting of COVID-19 compatible respiratory illness during the weeks/months prior to December 2019, and no serological evidence of infection in workers through SARS-CoV-2-specific serology-screening.”

Disease ecologist Peter Daszak, who worked on the WHO team, told CNN Chief Medical Correspondent Dr. Sanjay Gupta in February that “there is really still no evidence that this came from a lab.” He noted that researchers were tested and there was no evidence found of COVID antibodies, and said the lab was “very well run.”

“It’s not a complete throwing out of that hypothesis,” Daszak said. “It’s a conclusion that it’s extremely unlikely and that there is a much more likely hypothesis out there.”

But the WHO probe was swiftly criticized by the US, UK, and other governments over its limited access to “complete, original data and samples.”

The organization was also accused of being overly deferential to China throughout the course of the study, which was co-authored by 17 Chinese scientists — several of them from state-run institutions.

Members of the House Foreign Affairs Committee, which has long been investigating the origins of the pandemic, received a classified briefing on the matter last week, according to a source familiar with the matter. The source declined to say whether the intelligence report mentioning the hospitalized researchers was discussed during the briefing.

Current and former intelligence officials say that the idea that the virus was accidentally unleashed from the lab at Wuhan is reasonable, although they caution that there is no high-confidence assessment of that possibility.

In the final days of the Trump administration, former Secretary of State Mike Pompeo leaned into the possibility that the virus leaked from the Wuhan Institute of Virology, or WIV. Despite the intelligence being inconclusive, Pompeo put out a fact sheet that said the US had evidence researchers at the WIV had been sick in the fall of 2019 with Covid-like symptoms and that the lab, where coronavirus had been studied in bats, had a history of military research.

The process behind declassifying the intelligence in that fact sheet took a long time, and certain details were scrubbed from the final version that was released, sources familiar with the process told CNN.

In contrast, the Biden administration has not declassified any intelligence surrounding the origins of Covid-19 and has not indicated that it plans to do so.

One of the challenges in developing any certainty is access to the lab itself. China delayed access to international investigators for months after the initial outbreak, virtually guaranteeing that the lab had been deep-cleaned before any forensic analysis could be done, and investigators were also not allowed to view original data logs that scientists say would be critical to understanding the virus’ origins.

One critical avenue to finding an answer would be to run genetic sequencing on the original samples that staff at the Wuhan lab were working on. But “the Chinese are never going to allow that,” said one person familiar with the underlying intelligence.

“My own personal belief is we’re never going to know the answer to this,” this person said. “And the answer is not going to be found out by the CIA, because that would suggest the Chinese are looking for it themselves,” which this person said they were not.

“If the answer exists it’s not going to be found by traditional spycraft,” this person added.