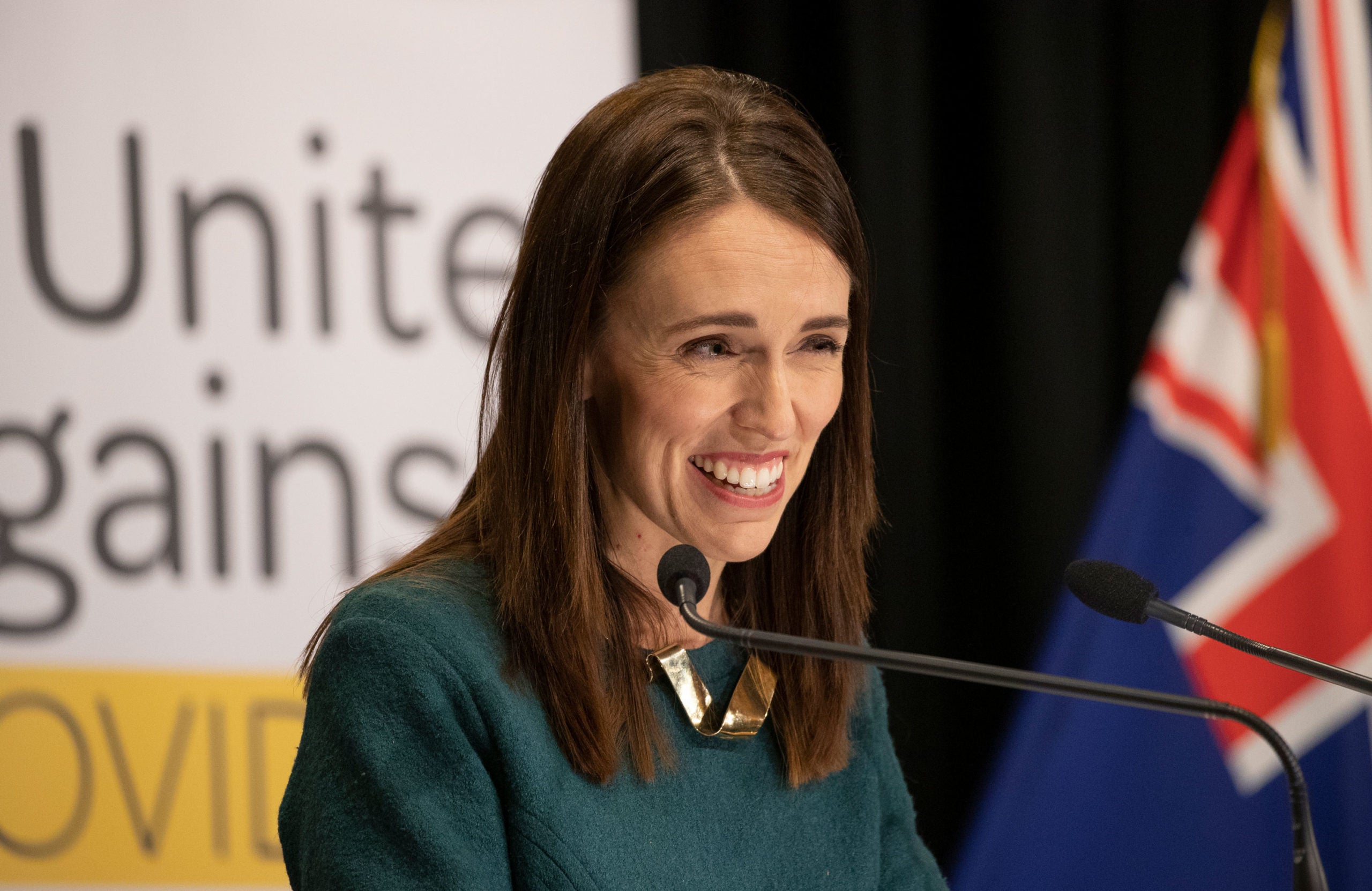 WELLINGTON, NEW ZEALAND - APRIL 06: Prime Minister Jacinda Ardern speaks during her post-Cabinet media update at Parliament on April 6, 2020 in Wellington, New Zealand. New Zealand has been in lockdown since Thursday 26 March following tough restrictions imposed by the government to stop the spread of COVID-19 across the country. A State of National Emergency is in place along with an Epidemic Notice to help ensure the continuity of essential Government business. Under the COVID-19 Alert Level Four measures, all non-essential businesses are closed, including bars, restaurants, cinemas and playgrounds. Schools are closed and all indoor and outdoor events are banned. Essential services will remain open, including supermarkets and pharmacies. Lockdown measures are expected to remain in place for around four weeks, with Prime Minister Jacinda Ardern warning there will be zero tolerance for people ignoring the restrictions, with police able to enforce them if required. (Photo by Mark Mitchell - Pool/Getty Images via CNN)
by: Angus Watson and Julia Hollingsworth, CNN
Posted: Aug 20, 2021 / 05:27 AM EST / Updated: Aug 20, 2021 / 05:27 AM EST

The lockdown began Tuesday over a single infection, the country’s first locally transmitted case since February. That patient had contracted highly transmissible Delta variant of the coronavirus. Authorities have since uncovered another 30 active cases, including 11 locally transmitted infections that were announced on Friday.

Prime Minister Jacinda Ardern said the lockdown would give contact tracers a chance to assess how much of the country has been impacted by the coronavirus’ spread out of Auckland, New Zealand’s largest city and where the first patient was identified. Some cases have been discovered in the capital, Wellington.

The extension will last until at least Tuesday at 11:59 p.m.. Authorities will reevaluate the situation on Monday, Ardern said.

The patient at the center of the most recent cluster was an unvaccinated 58-year-old man who had traveled to other parts of the country, and had no obvious link to the border, Director General of Health Ashley Bloomfield said Tuesday.

His diagnosis prompted Ardern and public health officials to institute a level four lockdown, the country’s strictest level. The measure means everyone must stay home and businesses are closed aside for essential services such as supermarkets and pharmacies.

“We are one of the last countries in the world to have the Delta variant in our community,” Ardern said Tuesday. “We’re in the position to learn from experience overseas, and what actions work, and what actions don’t work.”

New Zealand has been praised for its handling of the virus, which saw it close borders to almost all foreign nationals early, and impose strict state-run quarantines on incoming travelers.

That approach has seen it avoid the devastating outbreaks seen in other countries, and, prior to Tuesday’s announcement, life in the country had largely returned to normal. New Zealand has reported fewer than 3,000 Covid-19 cases and only 26 deaths in a population of about 5 million.

Neighboring Australia, which was also previously praised for its handling of the virus, has been battling its own Delta outbreak for the last few weeks. More than half of Australia’s population are in lockdown — and the country’s most populous city Sydney has been in lockdown since June.