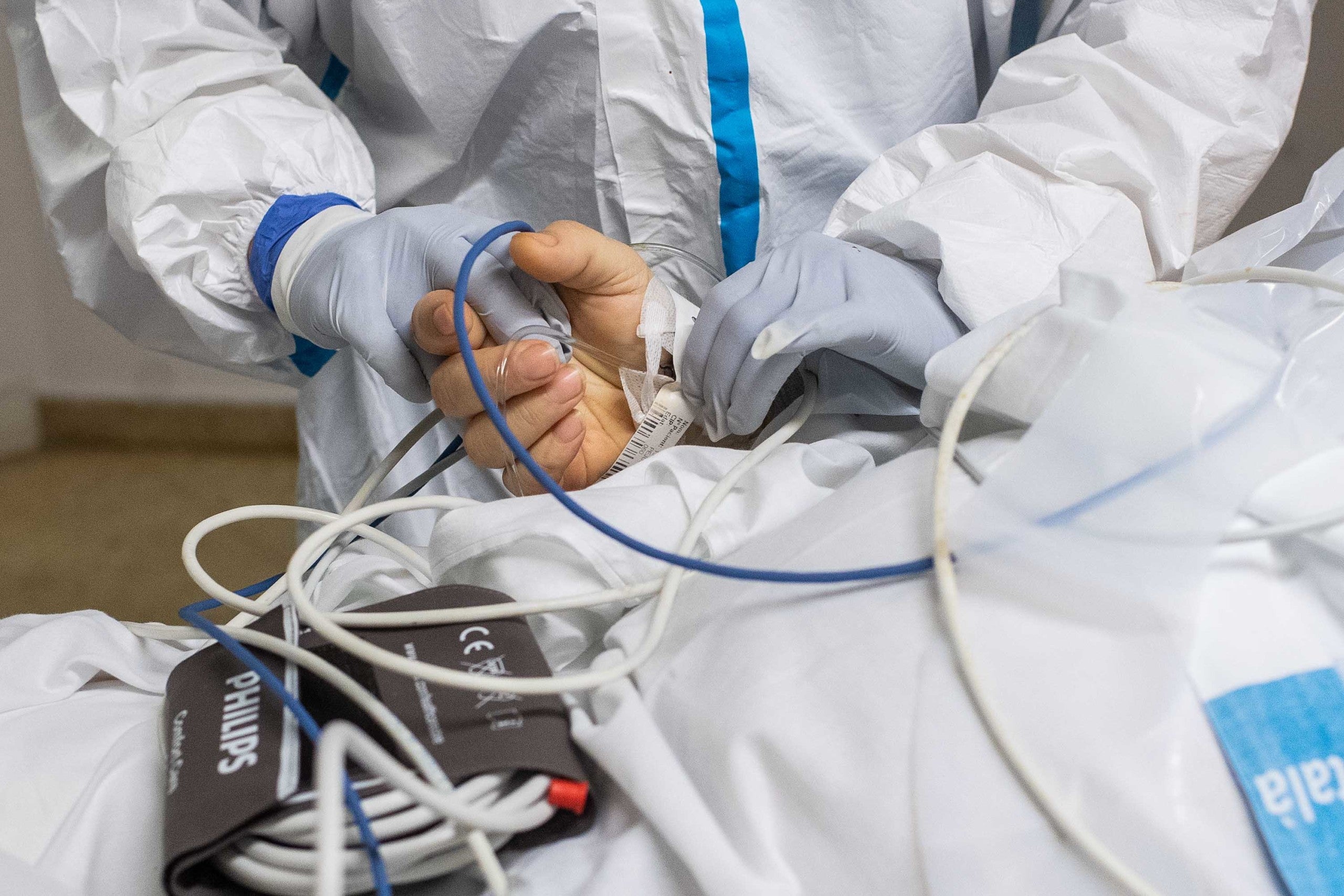 L´HOSPITALET DEL LLOBREGAT, SPAIN - APRIL 09: (EDITORIAL USE ONLY) A healthcare staff member in a protective suit holds the hand of a coronavirus patient as he is being moved to another floor of the ICU of the Hospital Universitari de Bellvitge on April 09, 2020 in L´Hospitalet del Llobregat, near Barcelona, Spain. More than 7,000 people are being treated in Intensive Care Units (ICU) across Spain, the Autonomous region of Catalonia is the worst affected with more than 2,500 patients. The national death toll has passed 15,000 due to the COVID-19 outbreak, although the country has reported a decline in the daily number of deaths. (Photo by David Ramos/Getty Images)
by: Vasco Cotovio, Claudia Rebaza and Claudia Dominguez, CNN
Posted: May 16, 2020 / 11:00 AM EST / Updated: May 16, 2020 / 11:00 AM EST

(CNN) — Spanish health authorities reported the lowest daily increase in coronavirus deaths since mid-March on Saturday, as the number of new cases continues to slow down.

According to data from the Spanish Health Ministry, 27,563 have now died from COVID-19 in the country, an increase of 104 in the past 24 hours. It is the lowest daily increase since March 17.

“While it is painful that people continue to die from coronavirus, the numbers are favorable,” Dr. Fernando Simon, Spain’s Director for Health Emergencies, said of the number of new deaths at the daily coronavirus briefing.

“Until now, we haven’t currently detected an active outbreak in any of the regions,” Simon said of the infections, while cautioning that Spaniards need to remain vigilant.

Simon made the remarks as the Spanish Health Ministry announced its testing capacity had increased by 18% in the past seven days, having conducted nearly 2 million tests since the outbreak began. In addition, more than 1 million rapid antibodytestshave also been carried out.

Its health ministry also reported a total of 50,723 health workers have been infected with the virus since the start of the outbreak in the country, 268 more cases since Friday.

While the Spanish government has not given an official number of deaths among health workers, the General Council of Official Medical Colleges, the Spanish doctors’ professional body (CGCOM), reported 48 doctors have died victims of COVID-19 in the country.

Meanwhile, the Spanish government will ask the country’s parliament for a month-long extension to the state of emergency in the country, Prime Minister Pedro Sanchez announced.

“The Spanish government will ask the Parliament a new extension to the state of emergency, which will have distinct characteristics, in relation to the previous ones, because the situation in Spain has changed,” Sanchez said. “To begin with, it aims to be the last [extension to the] state of emergency and to encompass, until the end of the de-escalation, and because of that we will ask parliament that instead of 15 days, that it is of around a month.”

The prime minister said with this, that right of free circulation would remain “limited” for a few more weeks and that certain regions could exit the state of emergency earlier than others.

Sanchez also said the phased easing of restrictions would carry on in half the country until the beginning of summer, while the rest of the country would finish one or two weeks afterwards, if there isn’t an increase in the number of cases.