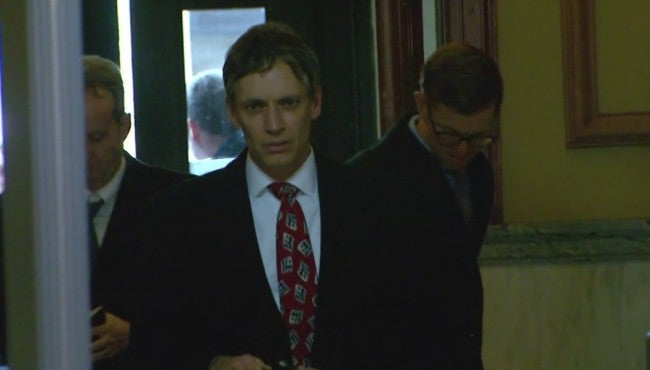 DANVILLE, Ind. (WISH) — Indianapolis City-County Councilor Jeff Miller will not face any new charges after a judge says he violated a “no contact” order at a neighborhood meeting.

Miller is facing two counts of child molesting, and two of Miller’s alleged victims — 10-year-old girls — were said to have been at the meeting.

On Friday, Miller entered the Hendricks County Courthouse very solemn and serious. Judge Mark Smith was very stern with Miller but let him off with a reprimand. The judge also had Miller sign a new “no contact” order.

The judge explained some specifics for the “no contact” order:

If Miller violates the order again, he would be returned to jail and held with no bond.

Jack Crawford, an Indianapolis attorney who has been following the case, said the judge could have ordrered Miller to be re-arrested, put on house arrest or given a GPS tracking bracelet.

Crawford also said the latest development with Miller is no small matter. since it directly affects Miller’s job as a councilor.

“It shows how a public official who is charged with a serious offense has a difficult, if not almost impossible task of doing his job. Part of a public official’s job is to mix with the public. And all these people on his ‘no contact’ list are certainly are members of the public. Then he always has to be aware if he has any contact with them could have serious consequences for Mr. Miller,” Crawford said.

Miller and his attorney Jeff Bell had no comment as they exited the courthouse.