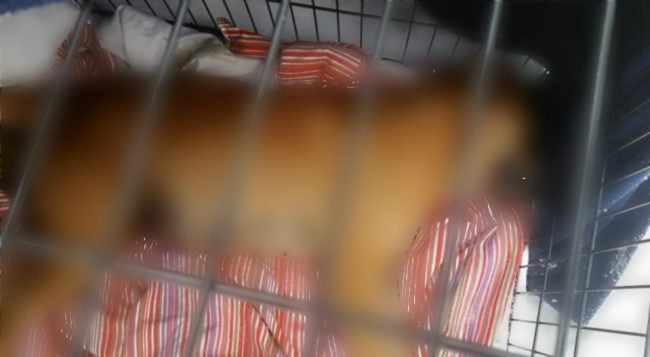 GRANT COUNTY, Ind.(WISH) — A central Indiana community is outraged after a dog was left to freeze to death in a crate.

The Marion Grant County Humane Society says the dog was found at the bottom of a hill on River Boulevard and Vine Street in Marion on Wednesday.

The human society says it knows who the owners are and now many people are calling for their arrests. The humane society is even offering a $100 reward for information that helps police find those responsible.

Staff wrote on Facebook that they are “devastated at the degree of callousness and cruelty and suffering of this dog. She will never know how our hearts are broken because we could not help her, but perhaps there could be some justification in finding the perpetrator.”

Since the post on Thursday, a woman named Kathleen Carlson posted a picture of a dog claiming it to be the one found frozen to death. Coleman said on Facebook that the dog’s name is Lady and there are three people responsible for her death.

The humane society says while those people have been identified, it is up to Marion Animal Care & Control and the police department to make an arrest.

Pets have been a big concern this week with the subzero temperatures.

Friends of Indianapolis Dogs Outside, or FIDO, is asking for help after exhausting their crate supply.

While a crate may have been used inappropriately with the dog killed in Marion, FIDO leaders say they provide crates to people to help them routinely bring their dogs inside overnight and especially during these cold times. They really need used or new large, collapsible crates, but will accept any size or type.

If you have a crate you’d like to donate to their cause, you can email FIDO at supplies@fidoindy.org to arrange drop-off or pick-up. If you would like to buy a new crate to donate, the organization accepts crates through Amazon. You can even choose FIDO on the Amazon Smile program for your purchase to help FIDO even more. Crates can be shipped to FIDO, 1505 N Sherman Dr, Indianapolis, IN 46201.