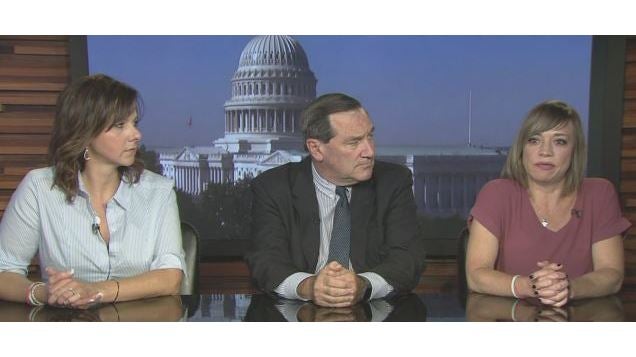 Two moms from Johnson County were in Washington, D.C., on Wednesday to talk to lawmakers about alarming tests done in June that showed dangerous levels of toxins inside homes in Franklin.

U.S. Sen. Joe Donnelly, a Democrat from Indiana, said any more testing requested by Franklin households needs to be covered by the state. The senator met with the two women from Johnson County.

Some families have been looking to do testing on their own homes, costs that we’re told could be around $2,000 from private companies.

Neither IDEM nor the Indiana Department of Health responded to requests for comment.

The meeting of Donnelly and the two moms came a day after Franklin Community Schools announced the results from tests for toxins done at two schools. They showed low levels of chemicals well under federal regulations. The testing was done because the schools are near a Superfund site, as well as those homes that showed dangerous levels of chemicals.

In response to Donnelly’s call, Gov. Eric Holcomb’s Office said it has directed state agencies to work with federal agencies as the investigation continues. The state will be at a community forum on Friday in Franklin about this very issue.

For years, people in Franklin have been concerned something is wrong in the environment after an alarming number of children developed unusual cancers.

Tests from June showed some homes near the closed Amphenol Corp., now a Superfund site, had dangerous levels of radon and trichloroethylene (TCE). Those chemicals can cause deadly cancers, but there has not been a definitive link at this time between the cancer cases in Johnson County and that site.

“If we can ban TCE on a federal level, that’s only going to make Johnson County safer,” said Stacie Davidson, one of the moms in Washington who is the co-founder for the activist group If It Was Your Child.

Davidson and Kari Rhinehart, the other co-founder, took to the nation’s capital to get answers from lawmakers about whether TCE will get banned. The EPA admitted in 2011 it can cause cancer. Remember, it’s one of those chemicals found at frightening levels in some Franklin homes.

Asked if he would support a ban and what would need to happen for it to occur, Donnelly said, “We have a new EPA (Environmental Protection Agency) director who will hopefully follow the pattern now that was done before.”

Donnelly said not only state officials but also federal agencies must collaborate to get answers for these families who have been searching for years.

Davidson and Rhinehart also met with other lawmakers including U.S. Sen. Todd Young, a Republican from Indiana, while in Washington.

“I want to thank the families who came to meet with me today for their advocacy and bravery. The situation in Franklin is troubling, and my team and I are working with federal, state, and local officials, as well as concerned families, to protect the health and safety of Hoosiers in this community. We had a productive conversation today, and I look forward to continuing working with these families.”