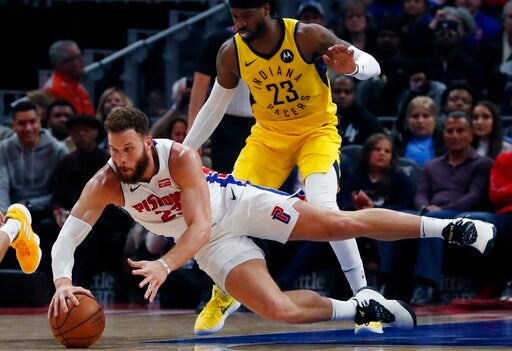 DETROIT (AP) — Andre Drummond had 26 points and 16 rebounds, Blake Griffin had a triple-double and the resurgent Detroit Pistons won for the seventh time in eight games, beating the Indiana Pacers 113-109 on Monday night.

Griffin had 20 points, 10 rebounds and 10 assists for Detroit, which is battling for a playoff spot in the Eastern Conference — and right now is on the right side of that cutoff. Indiana lost for only the second time in 10 games.

The Pacers won their previous meeting with Detroit, 125-88 on Dec. 26, but the Pistons look a lot better now. Detroit raced out to a 17-point lead in the first quarter.

Indiana trimmed the deficit to four by halftime and tied the game at 75 in the third quarter. Detroit answered with nine straight points, including six by Drummond.

The Pistons remain in seventh place in the East but increased their lead to 1½ games over Charlotte and two games over Orlando.

Pacers: Indiana is now 14-10 without guard Victor Oladipo this season. He ruptured a quad tendon in his right knee Jan. 23 and is out for the season.

Pacers: At Dallas on Wednesday night.