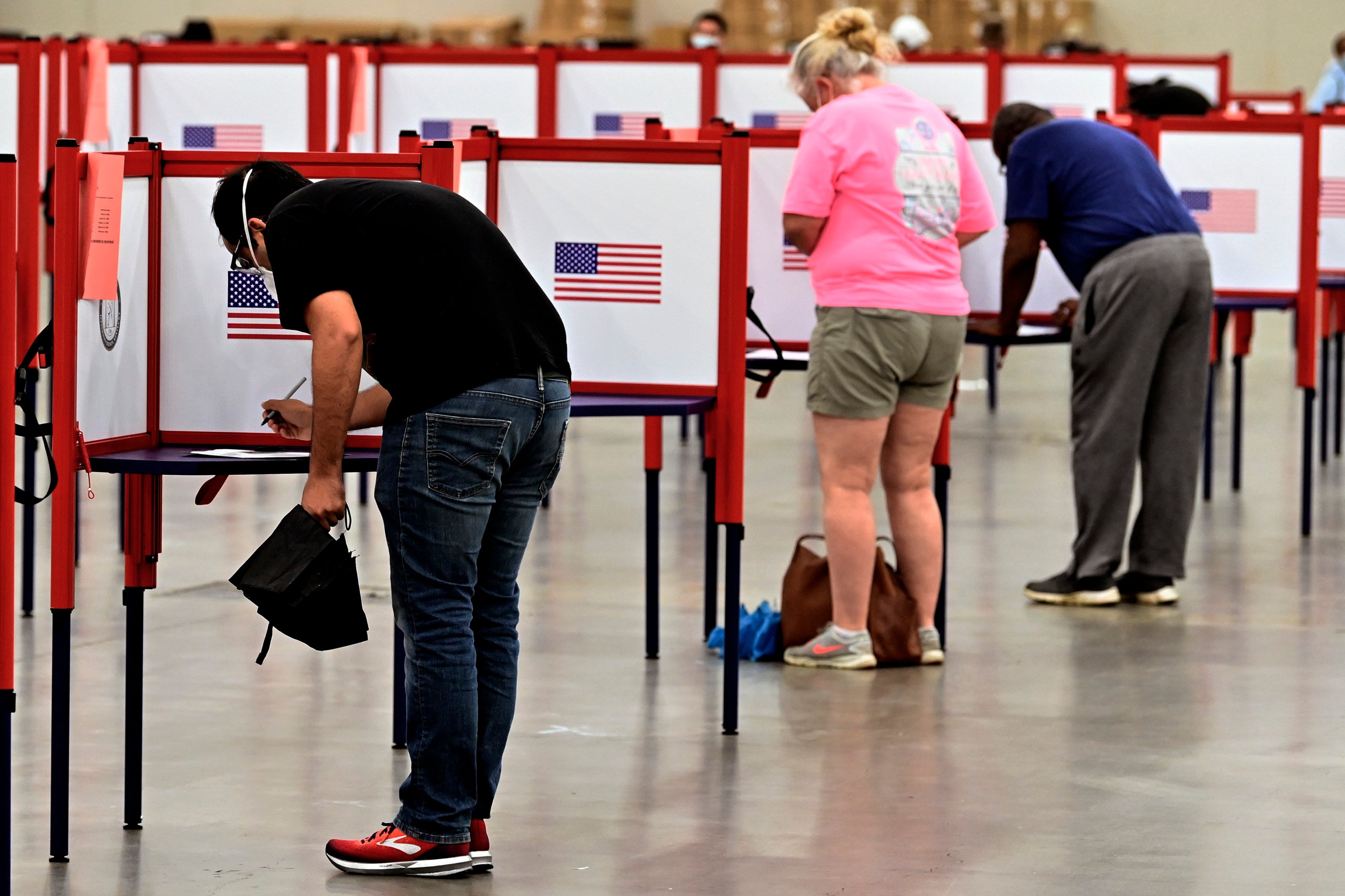 Voters fill out their ballots during in person voting in the Kentucky Primary at the Kentucky Exposition Center in Louisville, Ky., Tuesday, June 23, 2020. In an attempt to prevent the spread of the coronavirus, neighborhood precincts were closed and voters that didn't cast mail in ballots were directed to one central polling location. (AP Photo/Timothy D. Easley)
by: ALAN FRAM and PIPER HUDSPETH BLACKBURN, Associated Press
Posted: Jun 23, 2020 / 12:27 PM EST / Updated: Jun 23, 2020 / 12:27 PM EST

There was particular concern about how voting might play out in Louisville, Kentucky. The state’s largest city and hometown of a serious challenger for the Democratic nomination for the Senate, Louisville — population nearly 600,000 — had just one in-person polling place.

But voting was moving smoothly early Tuesday, with large crowds flowing through the Kentucky Exposition Center so quickly that there was no need for people to stand and wait at the many social-distancing markers on the floor.

Each of the city’s local districts was replicated inside the vast convention center, and plenty of poll workers were available to direct voters to their designated areas to cast their ballots. And while masks weren’t required, the overwhelming majority of voters appeared to wear them. Outside, buses shuttled people from huge parking lots to the center’s doors.

“It was in and out, no waiting at all,” said Anthony Spicer, a 51-year-old African American man.

All of this flowed from the coronavirus pandemic, which has upended life in America since March. Tuesday, it was on track to take its toll on voters hoping to cast ballots without long waits and for officials hoping to quickly declare winners in all but the most one-sided contests.

Like other states, Kentucky and New York have made it easier for voters to cast ballots by mail, instead of risking exposure to the virus by waiting on long lines. That is likely to mean delayed election results caused by a perfect storm — far more mail-in votes than usual and ballot-counting procedures that haven’t been adjusted to handle them.

The focus was on two races Tuesday. In both, Democrats were waiting to see if nationwide protests sparked by last month’s killing of George Floyd in Minneapolis police custody would translate to decisive turnout by African American and progressive voters.

Amy McGrath, favored by party leaders and buoyed by a massive $41 million war chest, faced an eleventh-hour scare as she fought to become the Democratic nominee against Senate Majority Leader Mitch McConnell, R-Ky. She’s a former Marine combat pilot with centrist views, which top Democrats like Senate Minority Leader Chuck Schumer view as a strong match for the Republican-heavy state.

His challenger is educator and political neophyte Jamaal Bowman, who has drawn strength from anti-racism protests and his accusations that Engel has grown aloof from his district in parts of the Bronx and Westchester. Engel, a liberal, has support from the likes of Hillary Clinton, House Speaker Nancy Pelosi and the Congressional Black Caucus. He’s also outspent Bowman, who’s been helped by progressive groups and a coveted endorsement by The New York Times.

Virginia was also holding congressional primaries, and there was one Republican House runoff each in North Carolina and Mississippi.

Kentucky has been overwhelmed by such an increase in mail ballots that the state’s two biggest counties, Jefferson and Fayette, aren’t planning to release results election night, said Secretary of State Michael Adams. Jefferson County is home to Louisville.

Kentucky typically receives few mail ballots, but expects them to account for the majority of votes this time. With the state now allowing any registered voter to vote by mail, more than 400,000 mail ballots were returned as of Sunday. All received by Saturday will be counted.

New York officials expect the vast majority of votes to be mail ballots this year, compared to their typical 5% share. Counties have until eight days after Election Day to count and release the results of mail ballots, with 1.7 million requested by voters.

Other notable contests Tuesday included an effort by one-time CNBC anchor and former Republican Michelle Caruso-Cabrera to grab the Democratic nomination from Rep. Alexandria Ocasio-Cortez, D-N.Y. Ocasio-Cortez, who has become a progressive icon, was an unknown 28-year-old when she won a 2018 primary over longtime Rep. Joe Crowley, who seemed in line to become House speaker.

As Tuesday’s voting approached, President Donald Trump continued his effort to undermine Americans’ faith in mail-in voting by repeating his unfounded claim that the system is rife with fraud.

“Because of MAIL-IN BALLOTS, 2020 will be the most RIGGED Election in our nations history – unless this stupidity is ended,” he tweeted, accusing proponents of “using Covid in order to cheat.”

Already this year, problems like long lines and lost mail-in ballots have plagued elections in Georgia, Nevada, Wisconsin and Pennsylvania.