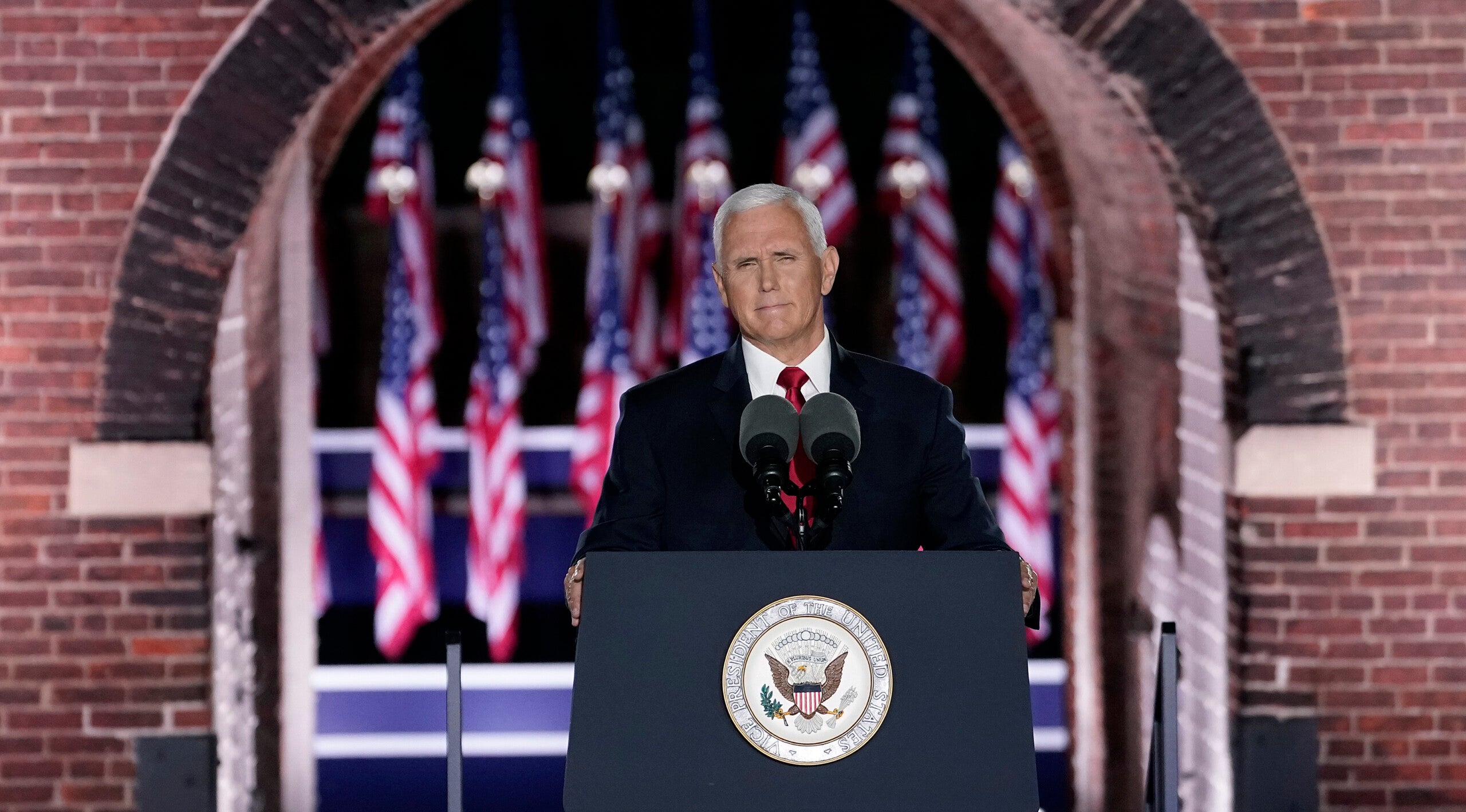 (CNN) — Mike Pence officially accepted his renomination to be vice president of the United States on Wednesday at the Republican National Convention, which took place against a stunning backdrop of fast-moving events in the Gulf of Mexico and professional sports locker rooms around the country.

A dangerous storm tearing toward the Gulf Coast and an extraordinary protest by basketball and baseball stars over the latest police shooting of a Black man threatened to overshadow Pence’s turn to headline the convention. The confluence of suddenly developing events put pressure on Pence and President Donald Trump to display of leadership at a grave national moment — on a night lined up as an assault on Democratic nominee Joe Biden.

However, due to their pretaped nature, many of the night’s speeches did not mention either the violence in Wisconsin or Hurricane Laura, a massive Category 4 storm that approached landfall near the border of Louisiana and Texas.

As he opened his remarks, Pence offered words of support for those in the path of Hurricane Laura, saying that the Trump administration is working closely with state authorities as the Federal Emergency Management Agency mobilizes resources and supplies.

“This is a serious storm. We urge all those in the affected areas to heed state and local authorities,” Pence said. “Stay safe, and know that we’ll be with you every step of the way to support, rescue, response and recovery in the days and weeks ahead.”

Pence stepped into theleading role Wednesday evening as the party looks to push Trump’s pro-police “law and order” message. He was expected to make the case that Biden would lead the country in a dangerously liberal direction as he defends the Trump presidency.

Pence spoke from Fort McHenry in part because it is a place that embodies America’s patriotism and the symbolism of the American flag. The defense of Fort McHenry during the War of 1812 — when the British attacked the fort during the Battle of Baltimore in September 1814 — inspired Francis Scott Key to write “The Star-Spangled Banner.”

A major theme of both his address and the night as a whole was support for law enforcement. The theme of the night contrasts sharply with National Basketball Association, Women’s National Basketball Association, Major League Baseball and Major League Soccer teams announcing they will not play in their Wednesday night games to protest police violence against Black people.

The Milwaukee Bucks decided against playing Game 5 of their playoff series against the Orlando Magic in protest over the police shooting of Jacob Blake — a 29-year-old Black man who was shot multiple times in the back as he tried to enter an SUV with his children in the vehicle — in Kenosha, Wisconsin, which is close to Milwaukee. The two other playoff games scheduled to be played Wednesday night were then also postponed as players decided to join the Bucks in the protest.

It’s a historic moment in the sporting world that stood starkly against the Republican messages of support for police and regular calls for athletes to stick to sports instead of making political statements.

The former Indiana governor was expected to address the violence in Wisconsin following Blake’s shooting. Two people were killed overnight and a third injured during the third night of protests in Kenosha. Antioch Police Deputy Police Chief Geoffrey Guttschow told CNN that Kyle Rittenhouse, 17, turned himself in on Wednesday at the Antioch police headquarters. Rittenhouse lives in Antioch, which is about 20 miles from Kenosha, where the shooting took place during the protest.

But during his speech, Pence made no effort to acknowledge the desperation of Black Americans traumatized by years of brutality at the hands of police that Democrats say are evidence of systemic law enforcement within law enforcement. Instead, he only offered words of support for police.

“We will always stand with those who stand on the thin blue line and we are not going to defund the police, not now, not ever,” he said.

Social media accounts believed to belong to Rittenhouse portray a young White man who has an affinity for guns, who is pro-police and a supporter of Trump. A Facebook profile and TikTok bio for Rittenhouse both refer to “Blue Lives Matter.” White House counselor Kellyanne Conway responded to reports that the shooting suspect allegedly attended a Trump rally in January. Conway said she was aware of the media reports and that the White House is “not responsible for the private conduct of people who go to rallies.”

Throughout the spring and summer as Americans filled the streets to protest the death of George Floyd, Pence has tried to reframe the debate as an attack on police. In numerous swing state appearances this summer, he has inaccurately suggested that the former vice president would side with far-left activists who favor defunding the police.

He renewed those criticisms on Biden and the vow that both he and Trump have made to “back the blue” in the midst of protests against police, making the Trump campaign’s case that the 2020 election is a choice between “freedom and opportunity” and a future of “socialism and decline.”

The vice president made a last-minute decision to address the situation in Kenosha. In the morning, a source told CNN that Pence would reference the violence in Wisconsin and then a person familiar with the speech said the vice president would not mention it whatsoever. Finally, about 90 minutes before he was scheduled to speak, Pence decided to insert a reference into the final draft of his speech after seeing how dramatically events had escalated throughout the day, making the decision only after landing in Baltimore for his address.

Pence only referenced violence in Wisconsin in order to slam Biden.

“Last week, Joe Biden didn’t say one word about the violence and chaos engulfing cities across this country, ” Pence said. “Let me be clear: the violence must stop — whether in Minneapolis, Portland, or Kenosha.”

Pence also slammed Biden on national security, noting that he advised against the raid ordered by President Barack Obama to take out Osama bin Laden in Pakistan. He also reprised a comment by former Secretary of Defense Robert Gates that the former vice president had been wrong on nearly every national security issue for the past four decades.

Former top officials in the Obama administration have written in their memoirs that Biden was “against” the bin Laden operation, that he was “firmly in favor of waiting for more information,” and that he was concerned about the risks of a raid.

Rewriting history on Trump’s response to the pandemic, Pence argued that Trump;s move to block foreign nationals from China from entering the country in late January saved “untold lives” and “bought us time to launch the greatest national mobilization since World War II.”

In reality, many medical experts have said Trump wasted precious time throughout February and that his restrictions on travel from China came too late to make a major difference in case numbers. Many of the cases that fueled the country’s initial hotspot were later found to come from Europe before Trump instituted a travel ban in March.

Pence claimed the federal government has now “coordinated the delivery of billions of pieces of personal protective equipment” though governors were forced to plead for help from the administration throughout the spring and summer.

And he made the stunning promise that a vaccine would come later this year, which is among the most optimistic projections from health professionals. Most experts believe a vaccine will be ready in early 2021.

“Last week, Joe Biden said ‘no miracle is coming,'” Pence said at Fort McHenry. “What Joe doesn’t seem to understand is that America is a nation of miracles and we’re on track to have the world’s first safe, effective coronavirus vaccine by the end of this year.”

The night also featured more impassioned pleas to female voters, a group Trump needs to persuade to have a chance at reelection.

With Trump trailing Biden by double digits among female voters, his allies and members of his team once again sought to portray him as a leader who has promoted and supported women. His daughter-in-law Lara Trump described the Trump Organization as a place where “countless women executives … thrived.”

“Gender didn’t matter, what mattered was the ability to get the job done,” she said.

Earlier, Conway — who became the first female campaign manager to win a presidential campaign when Trump was victorious in 2016 — praised the President for elevating women to senior positions in business and government.

“He confides in and consults us, respects our opinions, and insists that we are on equal footing with the men,” Conway said.

South Dakota Gov. Kristi Noem turned the tables on Democrats by arguing that they — and not Trump, who has repeatedly tested constitutional limits on his power — was a threat to the bedrock principles of American government.

And in remarks that took a highly selective view of protests in response to police brutality, she warned that Democratic-run cities were being “overrun by violent mobs.”

This story has been updated with additional reporting about a reference to violence in Wisconsin in Pence’s speech.