Widely shared photo of Biden without mask was taken in 2019 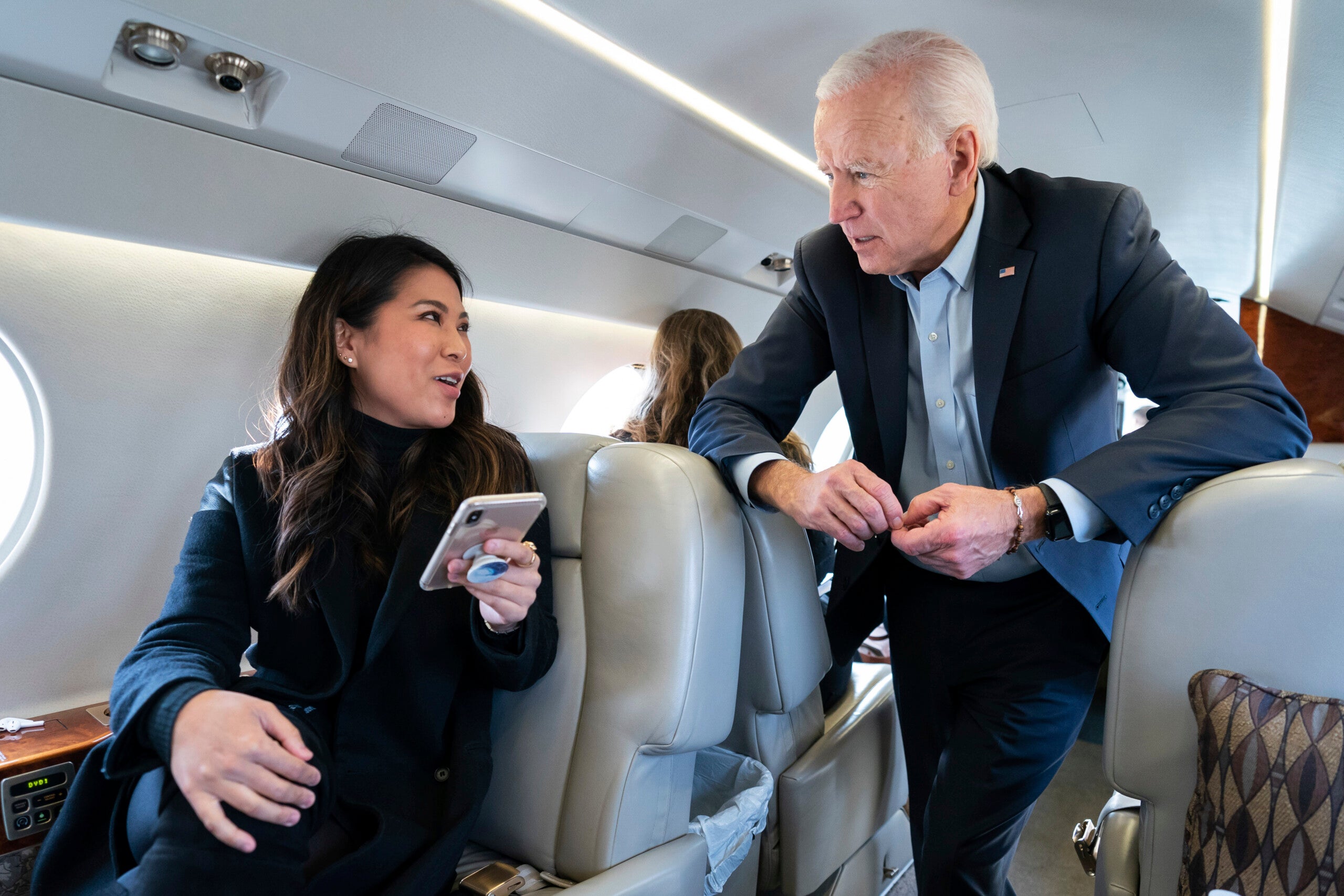 In this photo taken in November 2019, former Vice President Joe Biden speaks with his traveling national press secretary, Remi Yamamoto, on a flight to South Carolina. Richard Grenell, President Donald Trump's former ambassador to Germany and former acting director of national intelligence, tweeted this photo on Sunday, Nov. 1, 2020, alongside a photo of Biden standing outdoors while wearing a mask. The tweet, which claims that Biden wears a mask outside but doesn't wear one on his plane, creates the false impression that this photo of Biden without a mask was taken during the coronavirus pandemic. (Adam Schultz/Biden for President via AP)
by: AMANDA SEITZ Associated Press
Posted: Nov 2, 2020 / 05:10 PM EST / Updated: Nov 2, 2020 / 05:10 PM EST

CHICAGO (AP) — President Donald Trump’s supporters have seized on a photo circulating on Twitter since late Sunday that shows Democratic presidential nominee Joe Biden not wearing a mask while he talks to a campaign staffer on a plane.

Why wasn’t Biden, who has made a point to put on a facial covering throughout the campaign, wearing a mask? Because the photo was taken in November 2019, before the first case of the new coronavirus was reported, and months before global health officials began urging people to wear masks in order to stop the spread of the virus.

The image was shared on Twitter by Trump’s former acting Director of National Intelligence Richard Grenell, where it was liked and shared from his account more than 50,000 times. Grenell, who currently serves as special presidential envoy for Serbia and Kosovo peace negotiations, was a U.S. ambassador to Germany for two years before resigning in June.

When contacted by The Associated Press, Grenell did not answer questions about whether he knew the image was old before sharing it with his 671,000 followers.

Mask wearing has become a political issue on the campaign trail, with Biden frequently putting one on in public and Trump rarely doing so, and even mocking Biden for wearing a mask so often.

Here’s a look at the misleading claim:

AP’S ASSESSMENT: False. The photo was taken in November 2019. At that point in the campaign, the new coronavirus had not emerged globally so Biden did not wear a mask anywhere.

THE FACTS: A photo of Biden on a plane talking with his traveling national press secretary, Remi Yamamoto, both without masks, was taken in November 2019, not recently.

The photo was featured in a Vogue magazine article last week about Yamamoto and her role in the campaign. Conservative Twitter users seized on the image Sunday night, claiming it shows a hypocritical Biden not following recommended mask guidelines while traveling on a plane.

But the caption on that image clearly notes that it was captured by Biden’s campaign in November 2019 while Biden was traveling to South Carolina, before COVID-19 was even identified as a worldwide health threat.

Associated Press reporting confirms Biden traveled to South Carolina in late November of last year, making a campaign stop at Lander University in Greenwood on Nov. 21. The next day, he stopped at a soul food restaurant in Abbeville and filed paperwork to run in the state’s presidential primary.