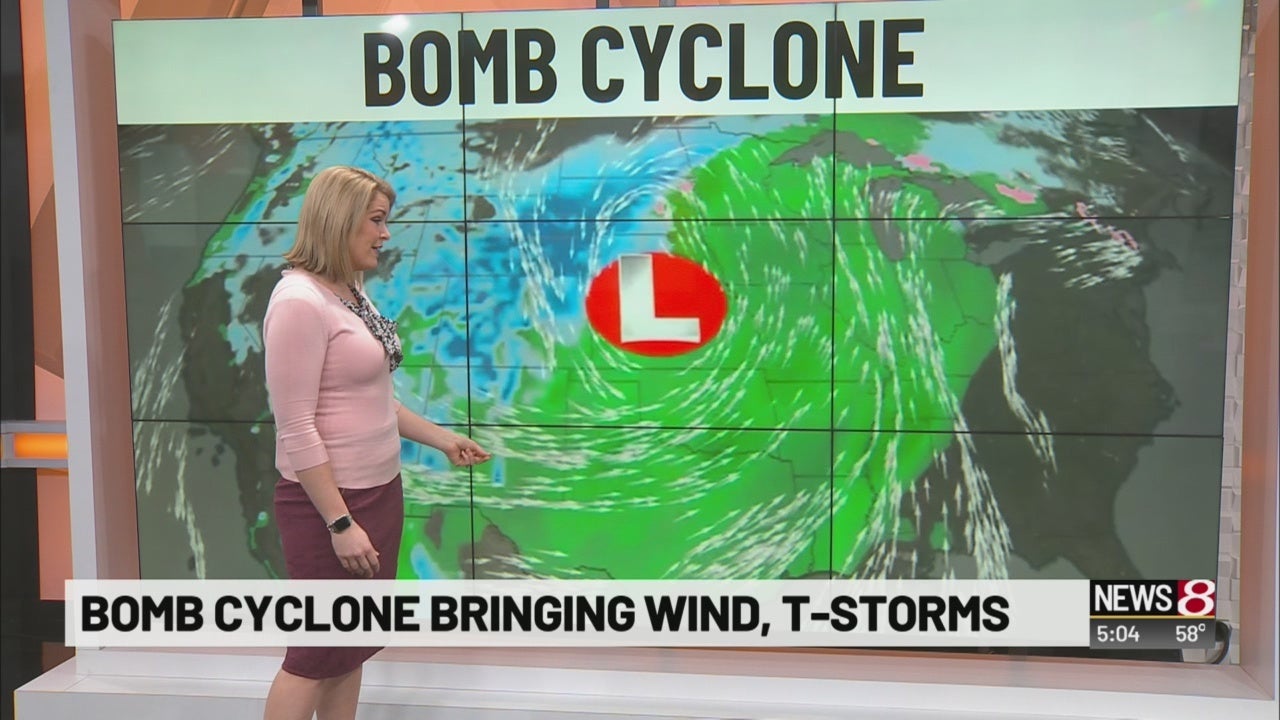 The storm is called a bomb cyclone to reference the speed at which it develops, according to NOAA. It’s also called a bombogenesis and happens when the pressure inside a storm drops twice as fast as usual, creating high winds and heavy snow or rain. It’s not the first one to hit the country; the January 2018 storm that knocked out power to the east coast was also classified as a bomb cyclone.

The storm has already caused serious damage in states including Wyoming, Colorado, and Texas. White-out conditions, a 100-car pile up, and damage to several buildings, trees and vehicles have been reported.

In central Indiana, the strong storm could bring gusts as high as 40-60 miles per hour, thunderstorm warnings, and tornado warnings, according to Storm Track 8’s Stephanie Mead and Randy Ollis. It has emergency management officials on high alert.

“There is a low-pressure system that’s out over Kansas area right now (Wednesday evening), and it’s at near record-low levels,” Booker said.

“You may have heard the term floating around social media “bomb cyclone” or “land hurricane.” Basically, what that means is we have a strong storm system heading in our direction and the pressure is going to be really really low, and, when the pressure is low, the winds ramp up. Those wind speeds will be really high around 10 a.m. and last all afternoon long,” Storm Track 8’s Tara Hastings said.

EMA director Booker said, “We are concerned. This is really the first opportunity in the spring for us to have severe weather. Next week is severe weather preparedness week (in Indiana) so we haven’t really had the opportunity to do the messaging that we normally do in preparation for storms.”

When seconds matter, Hastings said, being prepared is the best defense.

The emergency team in Hamilton County has crews on standby for Thursday, Booker said, and they have already internally tested their warning sirens to make sure those are up and going. Booker advised since the brunt of the storm could take place during the afternoon rush hour, commuters should consider trying to leave work early to avoid the storm.

Another tip for those at home, Booker said: Tie down or bring in any loose items that could be laying around in the backyard so they don’t pose a problem later.

One final tip, Booker said, is to make sure you have your weather radio programmed and ready to go, as that could be a life-saving tool ahead of the storm.