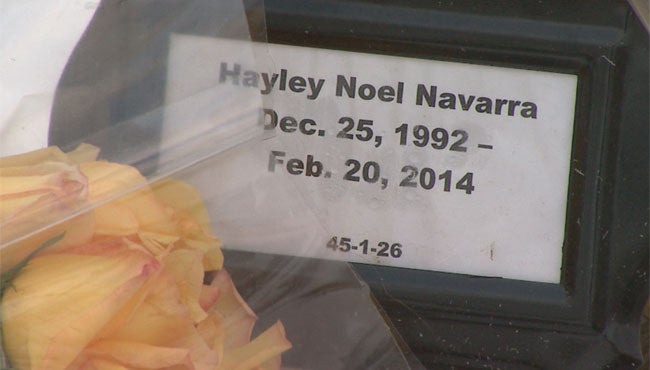 INDIANAPOLIS (WISH) – Family and friends are remembering four people who were shot and killed in a quadruple homicide.

It happened on the south side of Indianapolis a year ago.

The family of one of those victims is not only demanding justice, but hoping to raise enough money to give the 21-year-old a proper memorial.

Family and friends of Hayley Navarra stood together in the bitter cold at Crown Hill Cemetery Friday evening.

They were holding onto one another for comfort and support on the one year anniversary of Hayley’s death.

The 21-year-old was killed last February in a quadruple homicide. Investigators say four people were charged and are now awaiting trial.

Hannah Hodges says reality hasn’t sunk in yet that her sister is really gone.

“I just feel like it’s not real. I feel like she’s really not there and that’s going to come back one day, but I guess she was there at the wrong place, wrong time,” said Hodges.

Hodges admits her sister wasn’t perfect, but was trying to get her life back on the right track.

Navarra was laid to rest next to her grandpa. Her mom tells 24-Hour News 8 her family has been trying to raise money to get her daughter a headstone. They raised about $3,000, but are now close to $500 short.

“I want to see her just like my dad and I would love to sit there to put flowers in her vase and make it look pretty,” said Trisa Alvarado, mother. “Because she was just so gorgeous in that picture.”

Four people were charged for what police called a targeted robbery.

One of them, Kenneth Rackemann is facing trial this summer.

The family has set up a GoFundMe page to help raise money for Hayley’s headstone.