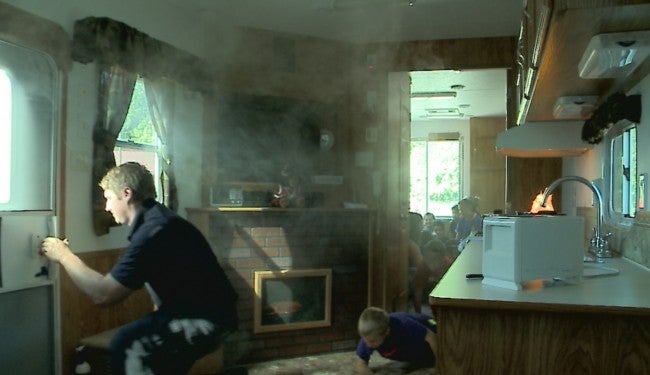 FISHERS, Ind. (WISH) – When it comes to fire safety, having smoke detectors may not be enough to keep your family safe. Experts say it’s just as important to have an escape plan.

This is why the Fishers Fire Department works with elementary students. WISH-TV got a look at how firefighter’s show and tell kids what to do.

Firefighters have been doing this training for a decade. And it’s become even more important they say because more keep moving into the area.

“You don’t know for sure what type of fire safety education the kids have had in other school districts,” Fishers Fire Department Captain John Mehling said.

Firefighter’s focus on an escape plan, a procedure they say all families need to have.

Firefighters say start with the floorplan and map out how to get out of each room two different ways, whether it be a door or a window.

They also suggest establishing a meeting place that’s away from the house. Although firefighters say this is important, not all parents involve their children.

“We have a plan that my wife and I have discussed but we have not necessarily shared it with our daughter,” Fishers resident Greg Susenmichel said.

“We try do that every year, just talk to them, what do we do if there’s a fire and where do we meet,” Fishers resident Dawn Michal said.

Firefighters say parents need to not only talk about a plan with their children, but practice as well. They say do it monthly with younger kids, and the older they get, do it a few times a year.

Also, get creative. Try hitting the alarm in the middle of the night and see how they react.

“Doing this as a family, practicing it makes it easy so that when the emergency happens, they don’t have to think and wonder what they should do, they can react,” Mehling said.

It’s more than making a plan. Captain John Mehling told us how to execute it.

Staying low isn’t the only thing you need to know. Mehling said be careful about which way out you take.

Feel the top, middle and bottom of the door, because it may not be the best way out.

“When there’s heat coming from the other side that doesn’t allow you to get out the door, or where the smoke is so thick and it’s coming down to the floor, then you don’t want to go out that way,” Mehling said.

While the drill might seem childish, firefighters say it’s not. By doing something as simple as this, they say you could save your family’s lives.

“We live that mindset that it’s never going to happen to me, but it happens to someone, and we want you to be prepared for if it’s you that it happens to,” Mehling said.