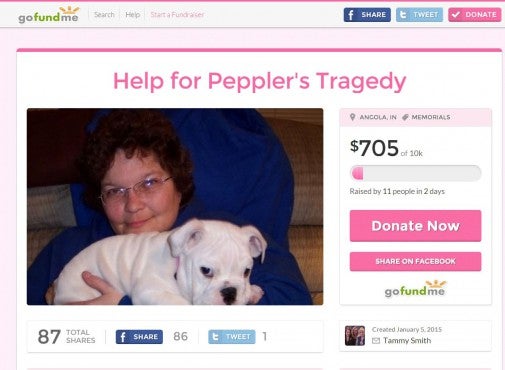 ANGOLA, Ind. (WANE) – While the woman police said was stabbed by her son continues to recover in a hospital, a family friend is trying to help her pay for the medical bills and her daughter’s funeral. Court documents said her son also stabbed her daughter to death.

Jeffrey Peppler is charged with murder and attempted murder in Steuben County. According to court documents, he stabbed his mother and his sister in their home at 3070 W 100 N in Angola Saturday night.

Court documents said Linda Peppler told police that her son, Jeffrey, came home and started hitting her on the head, saying he was mad that she had called the bar where he had been and asked to talk to him.

The probable cause said Paige, Linda’s daughter and Jeffrey’s sister, went into the bedroom and called 911. It said Jeffrey then got a butcher knife from the kitchen and busted down the bedroom door. Police found Paige dead in the bedroom.

The documents said Linda was screaming on the 911 call that Jeffrey was coming after her. Police said in the report she had several apparent stab wounds. She went to a hospital and is expected to be okay.

While she’s still recovering, one of Paige’s friends set up an account to help Linda pay for hospital bills and her daughter’s funeral. The webpage said Paige was a “beautiful and loving person, who would do anything for anyone.” She had two “fur babies.”

Click here for more on how to help Linda Peppler.