Grieving station comes together for newscast after deaths 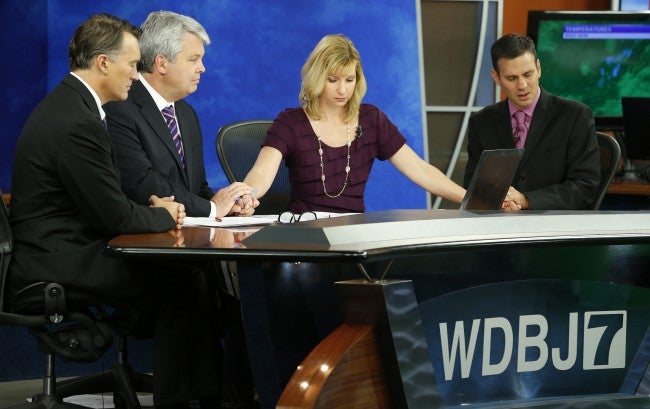 ROANOKE, Va. (AP) – Just one day after two of its own were killed, the news team at Virginia station WDBJ-TV regrouped, gathered together and leaned on one another for the live broadcast of its “Mornin'” show.

The show began with an image of the two victims – reporter Alison Parker and cameraman Adam Ward – and the words “In Memory.”

Morning anchor Kim McBroom, who was on the air Wednesday morning when the shooting happened, briefly fought through tears as she prepared for the newscast Thursday. On the air, McBroom said, “We come to you with heavy hearts. Two of our own were shot during a live shot yesterday morning.” She noted the outpouring of support that followed the deaths.

“We’ve had a lot of help,” she added, before introducing Steve Grant, an anchor from a sister station in Missouri.

The station then went into a series of news pieces on the shooting, including ones about the criminal investigation.

At 6:45 a.m., WDBJ observed a moment of silence. It marked the exact same time Parker and Ward were killed Wednesday by a former station employee during a live interview.

During a weather report, Leo Hirsbrunner became emotional while recalling how Ward would come over to the weather desk every morning, grab a piece of candy and hide the wrapper somewhere on the desk. Hirsbrunner said he found one of those wrappers Thursday morning. “I still have one over there this morning, so that kind of touches me here,” he said.

Throughout the show, during Hirsbrunner’s periodic updates, his voice faltered. “I don’t even know how to do weather on a day like this,” he said.

Parker’s boyfriend, station anchor Chris Hurst, appeared at the station where they both worked, telling his co-workers and viewers he wants to tell his girlfriend’s story even as he grieves.

Hurst recalled how Parker’s voice could light up a room with its kindness and joy, and how excited she was about her work, including an upcoming piece on hospice care.

“Alison, what great things she could have done,” Hurst said.

Hurst said he will take a brief break from his anchor role. “You won’t be seeing me in my normal position for, who really knows how long. But hopefully not too long because Alison would want me back,” he said.

For a brief segment, a grief counselor joined the newscasters.

“As a community, how do we take steps to move forward after something like this?” McBroom asked him.

“A lot of people are grieving this morning,” he said.