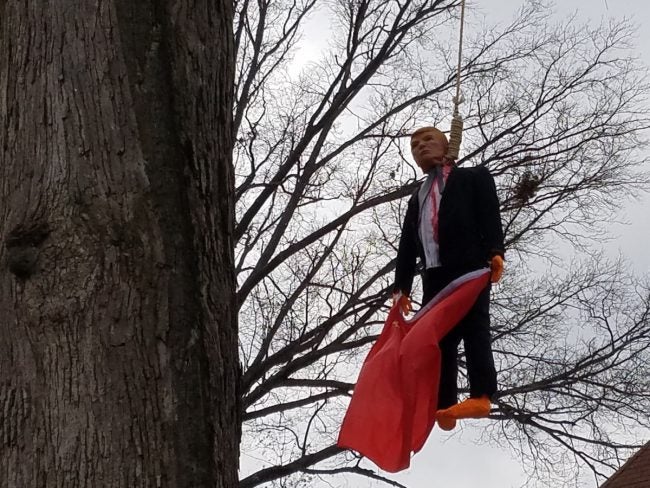 Cunningham said the past election cycle has been divisive and he wanted to make a bold statement about it. He said the display in his front yard is not meant to be a threat.

Instead, the effigy of President Trump hanging by a noose is in protest of Mr. Trump and his policies. Cunningham is disabled veteran and said he has never felt more passionate about the political landscape than he does now.

For the last year, anti-Trump signs have been on display in Cunningham’s windows and outside of his home along Oakdale Drive. After President Trump was sworn into office, Cunningham took it to the next level. The move has some people wondering if this should be perceived as a threat.

“I’m not personally planning on doing anything [to the President],” said Cunningham. “Do I wish him ill will? I wouldn’t be sad if the man had a heart attack.”

Geoff Paddock, who represents the city’s 5th District, said he was “absolutely appalled, disgusted, and angered” by the life-sized effigy of Trump hanging by a noose from a tree in the front yard. The Oakdale neighborhood falls within Paddock’s district.

“This is the President of the United States and it was kind of shocking,” said Paddock. “It made the goosebumps go down my back. There’s no mistake about it. The effigy is that of President Trump.”

Paddock drove by the home after someone from the Oakdale Neighborhood Association called to complain about the display.

Mike Cunningham told WISH-TV’s sister station WANE earlier this week that he hung the Trump doll by a noose with a Soviet Union flag in his front yard and attached a banner on his home that reads, “Trump is a disgrace to America and makes me ashamed I ever served.”

In a statement, Paddock called the display “a shockingly vile act” that is disrespectful to Trump and the office of the President of the United States and the history of the nation.

Paddock did not explain what he meant by “will not be tolerated.”

I am a disabled veteran who served this country honorably. I wonder how long the councilman has served in the military? Trump is a disgrace to this nation and I have the right of freedom of speech. I think it’s covered in the paper called the CONSTITUTION. Trump has threatened civilians with violence, threatened his opponents with violence, degraded & insulted veterans, mocked the disabled, degraded women, and thrown daily tantrums on twitter like a petulant child. I have been contacted by many people in Oakdale and throughout Fort Wayne, all of whom strongly support my display. I have yet to receive any complaints. For 9 years republicans hung effigies, shot at targets of Obama & his family (still being sold on eBay), threatened democrats with violence over the paranoia that Obama was coming to take their guns, and called Obamas family vile racist things. I wonder where your outrage was then? The more my display outrages people like the councilman proves how little they truly care about this nation. I STAND FOR FREEDOM. EQUALITY. WOMENS RIGHTS. LGBT RIGHTS. VETERANS RIGHTS. THE WORKING CLASS & THE DISABLED. I STAND FOR IMMIGRANTS & MINORITIES. The councilman only cares about a greedy, selfish, little man-child who doesn’t care one bit about anything other than his wallet & ego.”

A law professor at Indiana Tech told WANE this week that the effigy was protected by Freedom of Speech under the First Amendment to the U.S. Constitution, which permits and protects speech as long as it is not a call to “imminent lawlessness.” Another Indiana Tech law professor, though, said the move could invite a visit from the Secret Service if construed as a direct threat to the president.