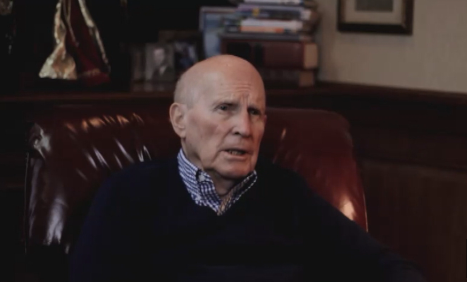 INDIANAPOLIS (WISH) — On Feb. 8, 1977 Richard Hall was in his downtown office at Meridian Mortgage when the unimaginable happened. A disgruntled customer came in with a shotgun and took him hostage. For the next three days, he was held at gunpoint at the mercy of his attacker. 40 years later, he’s sharing his story publicly for the first time.

In order to tell this story, 24-Hour News 8 had to dig deep into its archives. 40 years ago, it was a hostage situation that not just Hoosiers, but people all around the country sat glued to their television sets to watch unfold.

Days ago, Hall made public those prerecorded clips from 2015. He spoke about the terror that went on for days when Tony Kiritsis used wire to connect a shotgun to Hall. The gun was pointed at the back of his head.

“I looked into Kiritsis’ eyes early on, and I thought to myself, how can God allow somebody to get so angry?” said Hall.

If police shot Kiritisis, he would drop to the ground which would in turn pull the trigger on the gun. Consequently, Hall would’ve been left shot as well. From downtown Indianapolis, police say Kiritsis forced Hall to his Speedway apartment.

“He had a wild look in his eye and it was, I won’t say that it was astonishing to me, that he appeared out of control,” said Hall.

The media swarmed Kiritsis’ apartment for days. In a FaceTime interview, photographer John Blair, who is the uncle of 24-Hour News 8’s Drew Blair, says he was one of many journalists who stayed on the scene for the duration of the incident, sleeping a few hours here and there at a neighbor’s apartment.

“I walked around and I got back in front of him and that’s when I first really saw the barrel of the gun kind of looking at me. I thought, this isn’t very smart,” said Blair.

As for Kiritsis, he eventually removed the wire and shotgun from around Hall’s neck and surrendered to police. A jury found him not guilty by reason of insanity. He spent 10 years in a mental health facility and died in 2005.

Hall is releasing a memoir entitled, Kiritsis and Me: Enduring 63 Hours at Gunpoint. He is holding a news conference to discuss the anniversary anniversary on Wednesday morning. You can watch that press conference on WISHTV.com.