IMPD officer credited for saving the life of burglary suspect 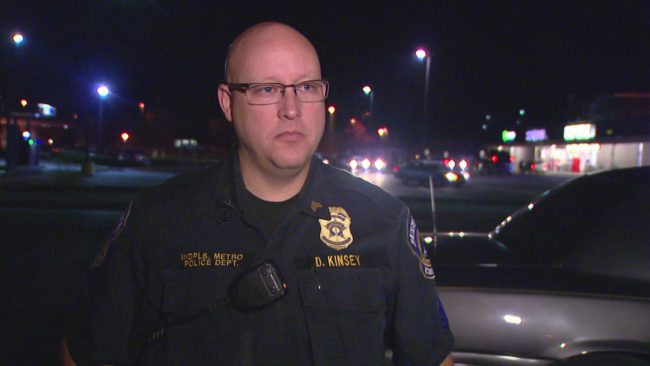 INDIANAPOLIS (WISH) — An IMPD officer is being praised for saving the life of a burglary suspect. The suspect had a deep cut on his leg from jumping a barb wire fence.

Medics told Sgt. David Kinsey what he did most likely saved the suspect’s leg and possibly his life.

Sgt. Kinsey told 24-Hour News 8 he never knows what to expect coming into work every night.

“There’s a lot of different calls, we have no idea what’s going to happen each night,” he said.

Police responded to an alarm call at an electrical construction company called LE Meyers on South Belmont Avenue on Sunday.

“They started asking for other cars to come down and myself and other cars showed up,” Sgt. Kinsey said.

Police said when they got there they found 30-year-old Christopher Whitis in the parking lot. He took off running from police and they lost sight of him.

“They were able to watch him start to climb the fence and climb over the barb wire and saw him get stuck and he forced his way off,” said Sgt. Kinsey.

It did not take the K-9 officer long to find Whitis. Police said he was hiding in the woods with a deep cut to his right leg.

“It was probably 12 to 18 inches long and two inches wide,” Sgt. Kinsey said.

Sgt. Kinsey said he did not wait for medics to arrive to stop the bleeding.

“When I got there and saw the wound and how much he was bleeding, I immediately just grabbed my tourniquet out of my cargo pocket that I carried it in and placed it on him to stop the bleeding,” he said

Kinsey said the suspect was screaming and asking for water.

“I told him that it’s going to hurt the worst when I put this on because once I tighten it down, it’s going to cause a lot of pressure and as soon as I start tightening it up he started screaming,” Sgt. Kinsey said.

An officer took the photo of the lifesaving act and police shared it on Facebook. Kinsey said he’s far from a hero.

“I know there are some out there that have also said that I should have not done what I did but we have to serve and protect, no matter what,” he said.

Whitis was arrested on burglary and criminal trespassing charges. Police said he also had an outstanding warrant for violating probation.