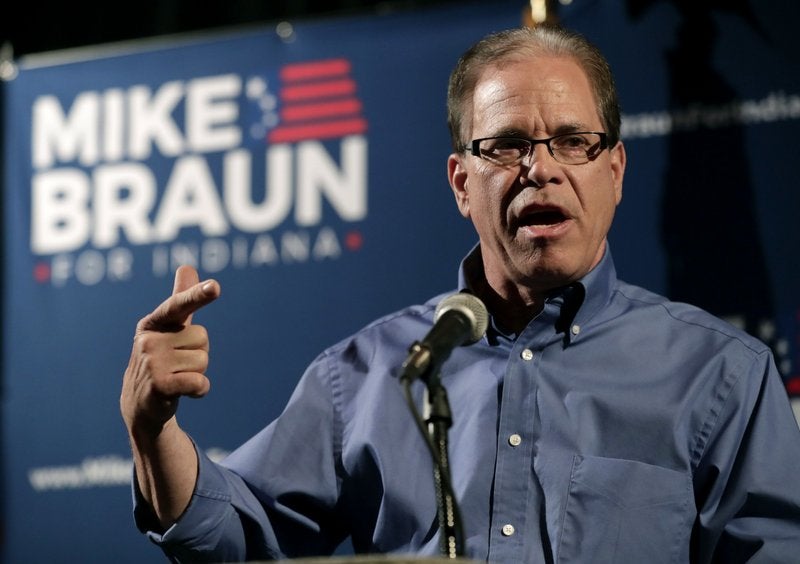 INDIANAPOLIS (AP) — The off-road accessory was shipped in a box emblazoned with the logo of an auto parts brand owned by Mike Braun, a multimillionaire businessman who often rails against foreign outsourcing in his bid to become Indiana’s next senator.

The words “Made in China” were stamped across the packaging.

Braun frequently criticizes his opponent, vulnerable red-state Democratic Sen. Joe Donnelly, for once owning stock in a family business his brother runs that operates a factory in Mexico. However, the Republican nominee’s own parts brand, Promaxx Automotive, sells products that were similarly manufactured abroad, according to a review by The Associated Press.

It has been well documented that Braun’s national auto parts distribution company, Meyer Distributing, ships and sells other companies’ goods that are made outside of the U.S. Such practice doesn’t leave him vulnerable to charges of hypocrisy, he argues, because as a distributor he only resells the parts and has no control over where the companies make them.

But the revelation about the Chinese origin of much of his own products line, which Meyer trademarked with the U.S. Patent and Trademark Office, draws into question some of Braun’s statements on the campaign trail, where he seldom — if ever — mentions Promaxx.

Braun’s campaign would not say what percentage of Promaxx parts are made in America. Spokesman Josh Kelley issued a statement Thursday suggesting it was a distraction from “Donnelly’s record of profiting from outsourcing.”

When the subject came up during a GOP debate in February, Braun said: “I deal with American manufacturers. We buy their products. I don’t know where they get them made.”

“My business is never involved in anything overseas other than some of the companies that we distribute their products,” he said in December at a GOP breakfast in Bloomington, Indiana.

While it’s difficult to tell where many of the Braun’s Promaxx products are manufactured, the AP was able to trace some accessories sold under the brand.

To do so, the AP purchased from Amazon one of Braun’s brand of winches, a device used to pull stuck 4×4 vehicles out of the mud. The box that arrived was labeled “Made in China” in several places on the accessory and packaging.

Numerous other products, including running boards and a specialized Jeep hood, were similarly listed as manufactured in China on websites that retail Promaxx goods, including Amazon, CARiD and eBay.

he AP also used unique UPC codes assigned to more than 50 Promaxx products to determine which suppliers Braun uses. That information was compared with data maintained by Panjiva, a website that tracks global trade, to determine where those companies procured their goods.

— Running boards, bumpers, brush guards and truck racks listed in the Promaxx catalog were supplied by Westin Automotive, which has received more than 700 shipments of such products from China since 2007. While several items in the company’s catalog were labeled as made in America, these products were not. Panjiva records also show Chinese shipments of these accessories were delivered to one of Braun’s warehouses in Arlington, Texas, including one made this past June.

— Another Promaxx supplier, California-based CYC Engineering, has received more than 400 shipments of similar products from Chinese manufacturers over the last decade.

— Bulldog Winch Co., a supplier Braun uses for off-road recovery equipment, has received hundreds of thousands of pounds of winches and accessory imports from China. Braun’s own company has also received about a half dozen shipments of winches and winch accessories in recent years from one of the same Chinese manufacturers, Panjiva records show. The winch purchased by AP was shipped from Braun’s company headquarters in Jasper, Indiana.

Since launching his campaign last August, Braun has tried to follow President Donald Trump’s playbook, running as an “outsider” while making his business success central in his pitch to voters. Also, like the president, whose own line of Trump-branded products was often sourced from overseas, Braun has downplayed his company’s use of foreign-made goods.

When the two congressmen he was running against in the Republican primary, Todd Rokita and Luke Messer, went after him for his companies’ practices, Braun counterattacked.

In one ad he ran during the primary, he accused Donnelly, Messer and Rokita of supporting, or benefiting from, trade policies that put “Mexico before Muncie” and “Beijing before Bloomington.”

As Donnelly and his allies have sought to turn the focus to Braun’s businesses, he has fought back, accusing the Democrat of “lying” about his companies, while insisting that they are “made in America.”

Kelley, the campaign spokesman, said Braun creates American jobs, adding that 95 percent of his suppliers are American companies. However, that doesn’t address where those companies that supply the Promaxx brand are getting their goods.

Experts say it’s not just normal for manufacturers to rely on supply chains that include at least some foreign goods — they say it’s unusual when companies don’t.

“It’s amazing how companies and organizations have global supply chains no matter how small,” said Mohan V. Tatikonda, an Indiana University business school professor who specializes in supply chain management. “There are companies that do not know who is making their stuff because you have to go so deep into the supply chain that you would need an audit.”

But, he added, there’s a catch: “If you’re going to say one thing and do another, that becomes a problem.”