Indiana lawmakers prepare for special session in May 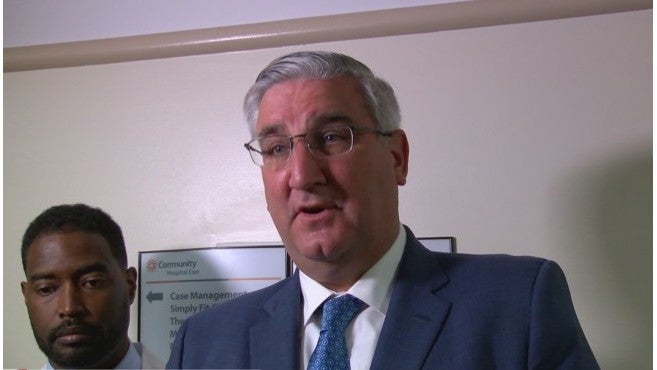 In two weeks, Indiana will convene the first special session called by the governor since 2009.

State legislators Monday published materials in advance of the May 14 special session.

One of the priorities of Gov. Eric Holcomb is to make sure the state is complying with federal laws.

Another is to make sure “schools have access to resources, that they can make sure there are places that are safe and secure,” Holcomb said.

Another is to update the state’s tax code to meet federal changes.

Another would call on lawmakers to approve a measure to provide $5 million for fiscal year 2019 for Indiana’s Secured School Fund. Lawmakers said that extra money would go directly toward making schools safer.

The governor said, “The best way that we can make sure that we’re controlling what’s going on inside a school is to make sure who’s in the school. It’s a right first step but we have ot make sure there’s funding available for schools to access. We’re doing that right now. We’re all over the state of Indiana auditing all our schools to make sure they’re safe and secure places.”

Another bill would allow for Ball State University to run Muncie Schools.

Another bill would let school corporations get money advances up to $500,000 for school security equipment and capital buys.

The goal is to do all of these measures in a one-day special session. One of Holcomb’s spokespeople said a special session could cost taxpayers roughly $30,000 a day from a designated fund. The governor said he expects lawmakers can do it all in a day.

House Speaker Brian Bosma, a Republican from Indianapolis, said, “We are committed to conducting this one-day special session in an open and transparent manner, giving the public and each lawmaker an opportunity to review the legislation and legislative procedure well before May 14. That’s why we released all special session documents on the state’s website today, including the five bills eligible for final passage. With the exception of a technical corrections bill recommended for adoption by the Legislative Services Agency, the four other bills will be eligible for a final vote in the same form they were in on the last night (of the regular session). This process will complete our work just as it should have been with limited expense to the taxpayer.”

Senate President Pro Temp David Long, a Republican from Fort Wayne, said, “By publicly posting these documents on the General Assembly’s website today, we are delivering on our pledge of full transparency and openness with regard to the special session. I’m hopeful that this will help facilitate an efficient process when we gather on May 14 to complete our work on these important issues.”