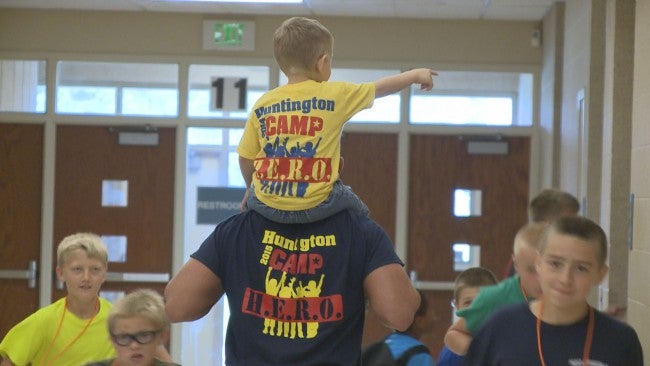 HUNTINGTON, Ind. (WANE) – The littlest special deputy in the country is back in action.

Four-year-old Wyatt Schmaltz is officially in remission after battling stage 4 Neuroblastoma, a rare form of cancer, for the past year. Thursday, he joined fellow officers volunteering at Camp Hero in Huntington, a public safety camp.

On July 9, 2014, Huntington County Sheriff Terry Stoffel swore in little Wyatt from his bed at Riley Hospital for Children in Indianapolis. A year later, to the day, the enthusiastic little boy showed an amazing turnaround just days after hearing the good news.

“We went up to our doctor’s office. We walked kind of slow to give Wyatt time to wake up. We got up there and [the doctor] said, ‘I took a look and everything is clear. You are officially in remission,'” said April Schmaltz, Wyatt’s mom. “I cried immediately, and Wyatt was just – he didn’t really understand at the time. He got to ring a bell that’s all that was important to him.”

More than 200 kids between eight and 13 are spending the week learning about public safety at Camp Hero. On Thursday, police, fire, EMS, and other community leaders demonstrated how dive teams work and the proper way to use a life vests.

Wyatt isn’t the only one officers have honored like this. They recently traveled to Cincinnati to deputize Drew Dorsett, a former camper battling Leukemia.

“They are the heroes,” said Trent Kiefer, master trooper with the Indiana State Police. “We want to be able to lift them up and show the other campers that even though you have problems, you can get through them.”

The officers interacted with Wyatt with love and energy on Thursday, like he was their own child.

“We had kids that we didn’t know coming up to him at the street telling him, ‘Hey you’re really strong and you’re my hero.’ It kind of gave him that extra push because I didn’t see him as down after that as I did before then,” said Mrs. Schmaltz. She thinks it wasn’t just the medicine that helped Wyatt.

“All the prayers we received from friends from family, from people we don’t know, people around the world…because without all that I don’t think we’d be where we are today”

The little deputy plans to salute the campers at their graduation Friday night in full uniform for the second year in a row. Only this year, he’s feeling a lot better.