US 30 closed in Columbia City after 2 semis collide 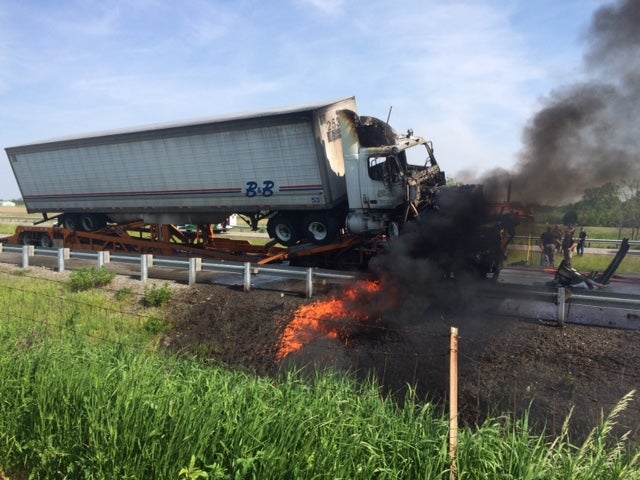 COLUMBIA CITY, Ind. (WANE) — Two semis collided on U.S. 30 in Whitley County early Tuesday, a crash that left the cabs fully engulfed in flames and the highway’s eastbound and westbound lanes closed. The highway’s westbound lanes have since been reopened to traffic.

Police and medics were called around 9:30 a.m. to U.S. 30 near Lincolnway West, on Columbia City’s west side near the Walmart. Police said two semi tractor-trailers crashed, and became “fully engulfed” in flames.

A witness told WISH-TV’s sister station WANE that a semi pulling a car hauler had been stopped on eastbound U.S. 30 at Lincolnway at a red light when another semi came up on it, hit the car hauler and launched into the air. It landed upon the first cab and the two burst into flames, the witness said.

The driver of the stopped semi became pinned in his cab but was able to escape with burns to his shoulder and hand. Witnesses told NewsChannel 15 he leapt from the cab and yelled out, “I’m alive.”

The driver of the second semi told police he had fallen asleep before the crash. He was not hurt.

A medical helicopter was called to the scene but neither of the drivers were airlifted away.

A crane was being called in to pull the second semi from atop the first.