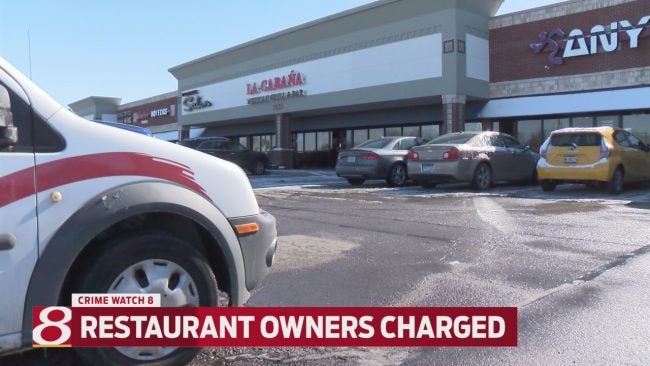 INDIANAPOLIS (WISH) — The owners of six Indiana restaurants have agreed to pay back $143,000 to the state after prosecutors charged them with theft.

Manuel Alonso and Rosalio Sanchez under-reported about $1.8 million dollars in restaurant sales between 2013 and 2015, according to Marion County Prosecutor Terry Curry. The $143,000 represent unpaid taxes on those sales.

The six restaurants named in court documents are located in Muncie, Indianapolis, Gas City and Fairmount.

Megan Bowman owns a salon next to La Cabana, a restaurant named in the report, near 96th Street and I-69.

“That surprises me,” Bowman said. “I don’t know if I know the owner, but whoever runs the place over there is a really nice guy.”

Prosecutors said in one restaurant, the staff opened the register more than 3200 times in one day but only recorded a sale 71 percent of the time.

An initial hearing for the case hasn’t been scheduled.

The staff at La Cabana told a 24-Hour News 8 reporter no one was available to speak to the reporter Thursday.