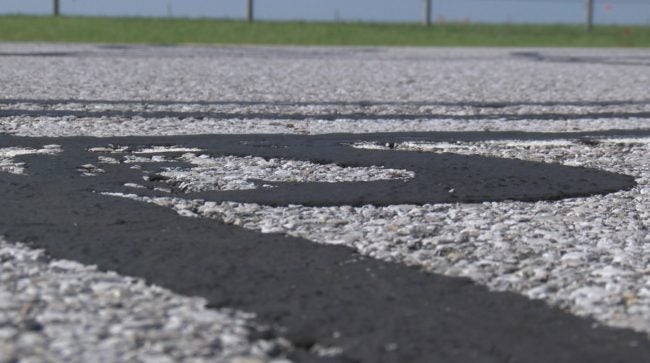 INDIANAPOLIS (WISH) —  INDOT is making training changes and repairs to roads after concerns brought up by motorcyclists to 24-Hour News 8.

24-Hour News 8’s Nina Criscuolo first reported on the concerns in July. She received hundreds of comments on Facebook and dozens of e-mails about tar snakes.

Tar snakes is a slang term for crumb rubber sealant. You’ve probably seen the black squiggly lines on many highways and interstates across the state of Indiana. It’s a way for INDOT to patch roads in an affordable, durable way, but bikers say it can cause them to lose control, especially in hot or wet conditions.

In July, bikers felt their concerns were not being heard and their safety wasn’t being made a priority. At the time INDOT said they were looking to make changes, so six weeks later, 24-Hour News 8 checked in to see what progress has been made.  INDOT spokesperson Harry Maginity said crumb rubber sealant will continue to be used.

“It is so much more long lasting. It’s so much more durable, but we have to get the application right. We have to put it down at the right temperature, with the right application, don’t over apply it, because that’s what’s happening here,” Maginity said.

That’s why Maginity said all staff who apply the crumb rubber used must complete new mandatory training before applying the product again or at all.

“Everybody who’s an applicator is going to be going through or has gone through this training process. Secondly, every site that has the application is going to be signed off on and examined by a supervisor, before we say ‘Ok, this site is correct,’” Maginity said.

Maginity said INDOT crews have gone to every site the department received a complaint about to analyze the area and complete friction tests. Four locations were identified as problematic. Two in the Richmond area and one in Brown County on State Road 45. Those have been chip sealed, which means the entire surface has been recovered to eliminate the tar snakes.

There is also a curve near Bloomington that will receive surface treatment to improve friction. A team of specialists is determining the best way to take care of the issue in that area.

If there is a roadway in your area that you’ve experienced friction issues on due to tar snakes or for any other reason, you can report that to INDOT.