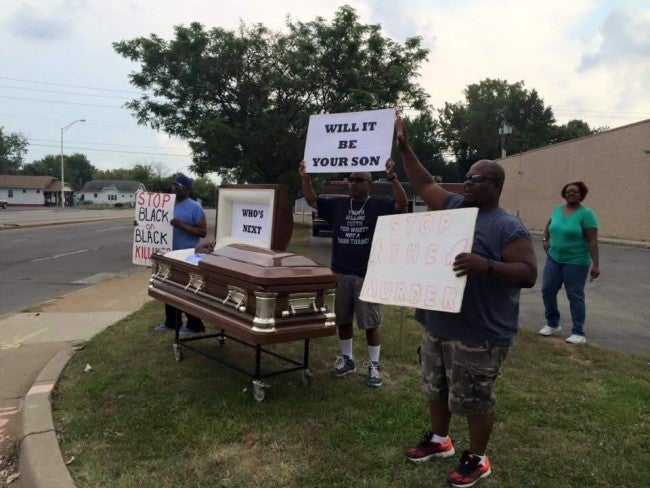 INDIANAPOLIS (WISH) — An Indianapolis pastor is hoping a casket display will help to get a message across to people living in the community for the violence to stop.

The pastor at Greater New Hope Church said the idea for dummy in a casket started two years ago as part of a street ministry.

The congregation has been setting up the casket display in different parts of town during the summer months.

“Once you see that dummy in the casket that visual is going to be with you for a while,” said Pastor Anthony Pippens.

Pippens said the response to the reality has been overwhelming.

“You see someone on the street corner somewhere with a casket and at first glance it may seem like it’s a real person inside the casket that would be kind of shocking,” said Pippens.

The person inside of this casket may not be real, but he does have a name and it’s Duke.

Pippens said the story behind Duke has sparked a lot of discussion about what could happen.

“When we don’t think then we are of the same capacity as Duke and that may be our reality too. We may actually change places with Duke and we really be the ones that end up in the casket not because we can’t think but because we didn’t think,” said Pippens.

The violent crimes, like murders and shootings have heightened Pippen’s awareness in recent months.

“It’s very upsetting. It’s disturbing even to the point for me that sometimes I’m not able to sleep at night,” said Pippens.

The casket was on display this weekend over at 30th Street and Emerson Avenue.

Photos taken at the scene show many people holding signs and questioning the continued violence.

Pippens said some parents are also using the display to teach their kids a valuable lesson.

“They’ll bring their children around and allow them to see it a lot of times, they come to the casket, they have a conversation with the youngsters right in front of the casket letting them know what he’s trying to tell you if you don’t straighten up, you don’t do the right thing this really could be you,” said Pippens.

The pastor said the next casket display is scheduled for September 12. The church is still working out the details of a location.