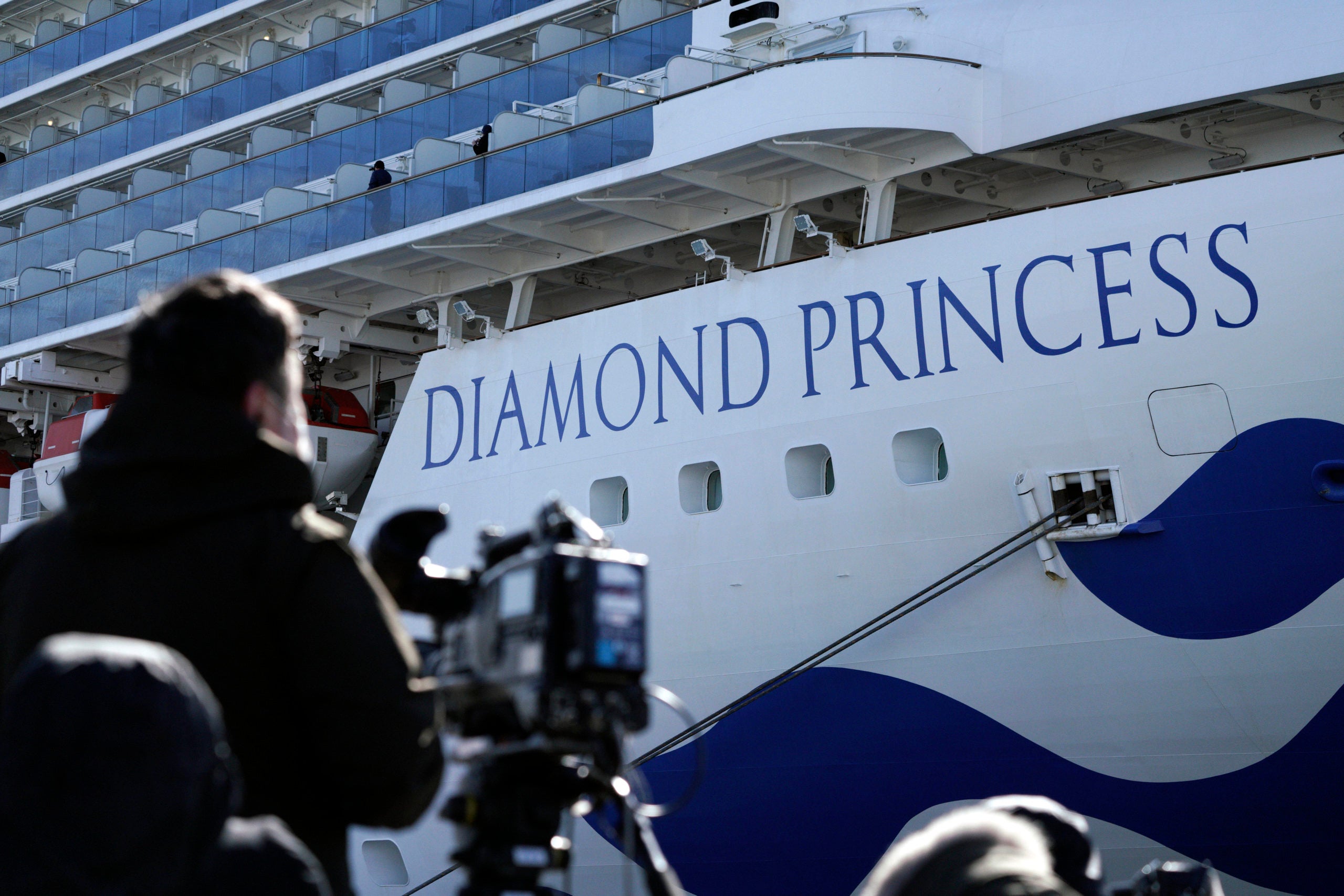 The cruise ship Diamond Princess is anchored at Yokohama Port for supplies replenished in Yokohama, south of Tokyo, Thursday, Feb. 6, 2020. Health workers said 10 more people from the Diamond Princess were confirmed ill with the virus, in addition to 10 others who tested positive on Wednesday. They were dropped off as the ship docked and transferred to nearby hospitals for further test and treatment. (AP Photo/Eugene Hoshiko)
by: The Associated Press
Posted: Feb 6, 2020 / 12:01 AM EST / Updated: Feb 6, 2020 / 12:01 AM EST

BEIJING (AP) — Ten more people were sickened with a new virus aboard one of two quarantined cruise ships with some 5,400 passengers and crew aboard, health officials in Japan said Thursday, as China reported 73 more deaths and announced that the first group of patients were expected to start taking a new antiviral drug.

The ships in Japan and Hong Kong are caught up in a global health emergency that seems to worsen by the day.

In the port city of Yokohama, just outside Tokyo, health workers said 10 more people from the Diamond Princess were confirmed ill with the virus, in addition to 10 others who tested positive on Wednesday. The latest infections included four Japanese, two Americans, two Canadians, one New Zealander and one Taiwanese. Most were in their 60s and 70s.

They were dropped off as the ship docked and transferred to nearby hospitals for further test and treatment.

The 3,700 people on board faced a two-week quarantine in their cabins. The ship had 2,666 passengers and 1,045 crew members. More tests are pending on 171 others who had symptoms or had contact with a man who was diagnosed with the virus after leaving the ship in Hong Kong, the Health Ministry said.

The 3,600 people aboard the Hong Kong ship were also being screened after three passengers on a previous voyage were diagnosed with the virus. The territory’s beleaguered leader, Carrie Lam, announced that two terminals — including one where the cruise ship is currently quarantined — will be shut down.

The director-general of the World Health Organization, Tedros Adhanom Ghebreyesus, on Wednesday asked for $675 million to help countries address the expected spread of the virus. He acknowledged that the sum is a lot, but told a news briefing that “it’s much less than the bill we will face if we do not invest in preparedness now.”

Tedros said that in the last 24 hours, the U.N. health agency has seen the biggest jump in cases since the start of the epidemic. According to the latest figures early Thursday, the number of confirmed cases jumped by 3,694 to 28,018, and the death toll rose to 563.

Outside mainland China, at least 240 cases have been confirmed, including two fatalities, one in Hong Kong and another in the Philippines.

South Korea reported four more cases for a total of 23. They included a Chinese tourist and South Koreans whose relatives were infected or were in contact with patients.

The official Xinhua News Agency said clinical trials for the antiviral drug Remdesivir have been approved and the first group of patients are expected to start taking the drug on Thursday. The stock price of the drug’s maker, American biotechnology company Gilead Sciences Inc., has enjoyed a boost from word of the trials.

China has strongly defended its epidemic control measures and called on other nations not to go overboard in their responses. Countries “can assess the epidemic situation in an objective, fair, calm and rational manner, respect authoritative and professional WHO recommendations, understand and support China’s epidemic control efforts,” foreign ministry spokeswoman Hua Chenying said at an online news conference. “Fear is worse than any virus.”

As thousands of hospital workers in Hong Kong went on strike to demand the border with mainland China be closed completely, the city announced that all people entering from the mainland, including Hong Kong residents, must be quarantined for 14 days. Tokyo Olympics organizers, meanwhile, said they are increasingly worried about the disruption the virus is causing ahead of the games, which open in less than six months.

On Thursday, a spokesman said Hong Kong emergency services would continue to be affected because a “large number” of staff were anticipated to be absent.

More than 50 million people are under virtual quarantine in Wuhan, where the outbreak began in December and where the vast majority of the deaths have been recorded. Throughout China, cities, towns and villages have enacted varying levels of restrictions and foreign countries have severely restricted travel to and from the country.

The virus, believed to have originated in wild animals sold at a food market in Wuhan, is part of a family of coronaviruses, including MERS and SARS, and causes fever, cough and shortness of breath. It is particularly deadly among people over 60 and those with preexisting illnesses such as heart disease and diabetes.

Reports also said an infant had been found with the virus, hours after being born to an infected mother in a Wuhan hospital. The government has yet to officially confirm the reports.

To reduce the danger of exposure for health workers, Beijing is seeking to develop a robot to administer throat tests. Separately, Shanghai announced that all schools will delay reopening until at least the end of February, rather than the middle of the month as originally planned. The exact date will depend on how the outbreak develops.

As examples of anti-Asian discrimination mount, U.N. Secretary-General Antonio Guterres appealed for “international solidarity” and support for China and other countries hurt by the virus. He urged a stop to any stigmatization of innocent people.

To treat the thousands of patients in its hard-hit central region, China built a new hospital in a matter of days and converted a gymnasium, exhibition hall and cultural center.

Patients were being moved into a 1,000-bed hospital with prefabricated wards and isolation rooms in Wuhan, whose health services had been overwhelmed by the number of daily cases. A 1,500-bed hospital also specially built for virus patients is to open Thursday. The hospitals made from converted public spaces to treat patients with mild symptoms have a total of 3,400 beds, the simple cots placed in tight rows in cavernous rooms without any barriers between them.

The city has also set up 132 quarantine sites with more than 12,500 beds, according to Xinhua.