As hospitals in Brazil teeter on the brink of collapse, Bolsonaro does pushups with supporters 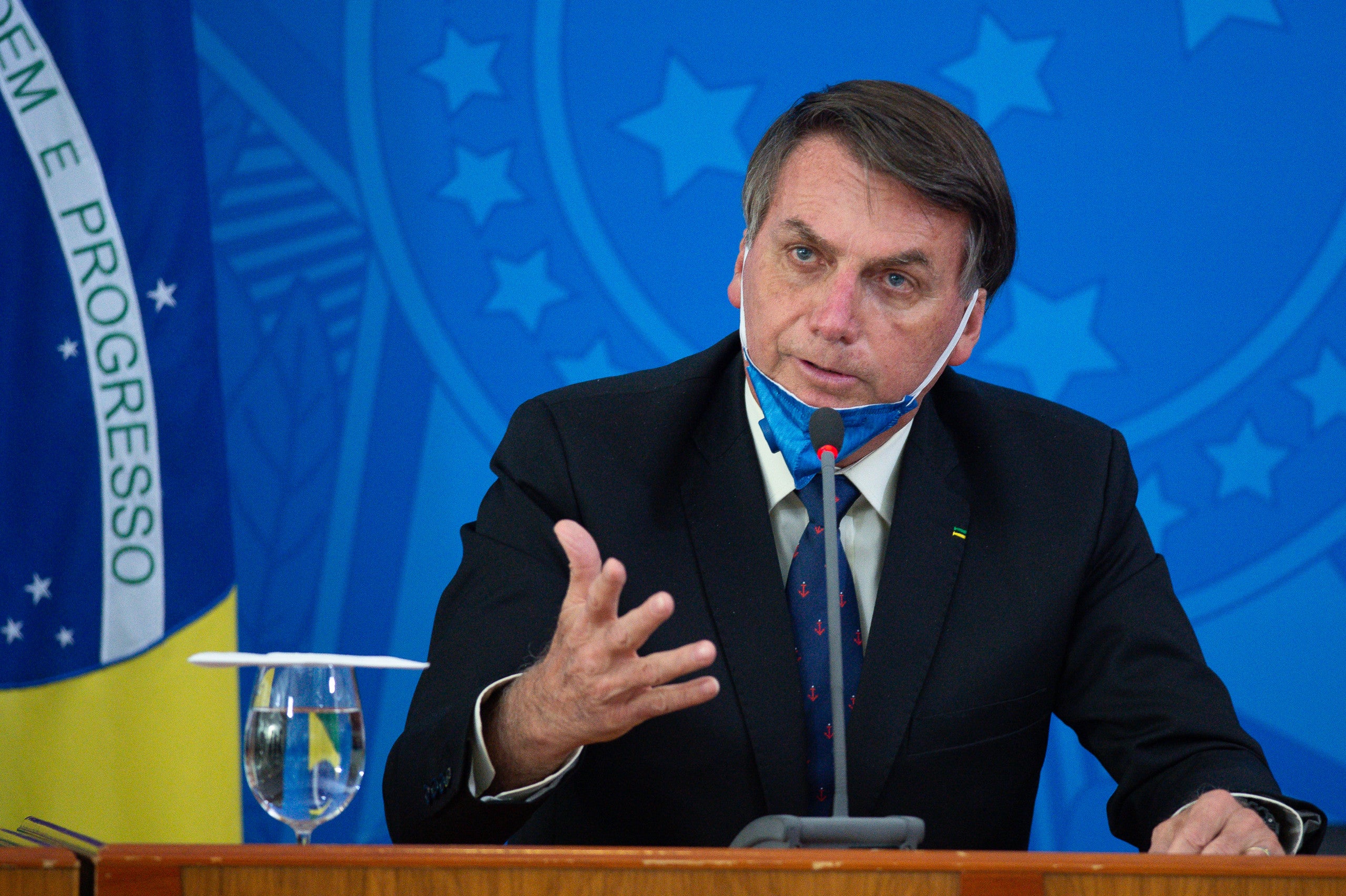 BRASILIA, BRAZIL - MARCH 20: Jair Bolsonaro President of Brazil takes off his protective mask to speak to journalists during a press conference about outbreak of the coronavirus (COVID - 19) at the Planalto Palace on March 20, 2020 in Brasilia, Brazil. (Photo by Andressa Anholete/Getty Images via CNN)
by: Rob Picheta, Vasco Cotovio and Shasta Darlington, CNN
Posted: May 18, 2020 / 08:10 AM EST / Updated: May 18, 2020 / 08:10 AM EST

(CNN) — The health care system in Brazil’s largest city is wavering on the brink of collapse and coronavirus deaths throughout the South American nation are soaring — but President Jair Bolsonaro nonetheless reveled in crowds of supporters on Sunday, joining yet another anti-lockdown protest in Brasilia.

“The city is coming to the limit of options,” Bruno Covas told journalists Sunday, warning that nine in ten intensive care beds were full. “We need to decide if we want to test the limits, or if we will be prudent and firmly maintain social isolation for the time needed so that the health system doesn’t collapse. We are closer than we would like.”

But there was a strikingly different message on display outside the President’s offices in Brasilia, where Bolsonaro appeared among crowds protesting the country’s lockdown measures on Sunday.

The populist leader, who has frequently dismissed the threat posed by Covid-19 even as it began to ravage his own nation, disregarded social distancing guidelines to pose with supporters. His appearances at such rallies have become a regular phenomenon.

At another engagement with a group of men in military outfits, he dropped to the ground to do pushups. “Above all (people) want freedom, they want democracy, they want respect,” he said in a video posted online.

Brazil is one of the few large countries in the world where daily cases and death rates are still ascending.

The country has overtaken Spain and Italy to record the fourth-most Covid-19 cases anywhere in the world, according to Johns Hopkins University, even though its outbreak is at a far earlier stage than countries in Europe or Asia. Its death toll has meanwhile topped 16,000.

The virus has dealt a blow to Sao Paulo, home to 12 million people, whose hospitals are suffering a fate previously seen in similarly hard-hit cities like Madrid, Lombardy and New York.

The city has 38,605 confirmed cases, around a sixth of the total confirmed cases in Brazil, and has reported a significant proportion of the country’s deaths.

In March, when Sao Paulo city and state declared quarantine, more than 60% of residents sheltered at home and the spread of the virus slowed. But in the last few weeks the share of residents respecting the quarantine has fallen below 50% and the numbers have started to quickly rise.

Staying in isolation has been particularly difficult for the city’s poorest residents, many of whom live in tightly packed favelas and who are forced to go to work in order to maintain an income.

Bolsonaro has pressed ahead with his anti-lockdown rhetoric even as cases skyrocket. He has repeatedly dismissed Covid-19 as a “little flu” and urged businesses to reopen, even as many governors scramble to implement social isolation measures and slow the spread.

On Sunday he attended another rally against lockdown measures, which have become a regular opportunity for his supporters to gather en masse and catch a glimpse of the populist leader.

The President stood before a cheering crowd with several members of his team, wearing a face mask but raising the hands of those around him into the air.

He later ventured towards the protesters, posing for pictures and holding children aloft in the air — a clear violation of social distancing guidelines that officials in Sao Paulo are calling on people to follow.

Shortly after the rally, Bolsonaro welcomed a group of men wearing military outfits at the presidential palace. The men said they were paratroopers from the army who wanted to show support for the president.

The group said a prayer for Brazil, at one point shouting “Bolsonaro is us.” They also did several rounds of pushups with the President.

Bolsonaro has recently seen a second health minister leave his government in the space of a few weeks.

Nelson Teich resigned on Friday, having been at odds with Bolsonaro over his handling of the coronavirus crisis and Bolsonaro’s desire to use hydroxychloroquine as a possible treatment for Covid-19.

Teich had been appointed about a month earlier to replace Luiz Henrique Mandetta, whom Bolsonaro fired after a long stand-off between the two men. Bolsonaro had refused to support social distancing measures which Mandetta recommended.