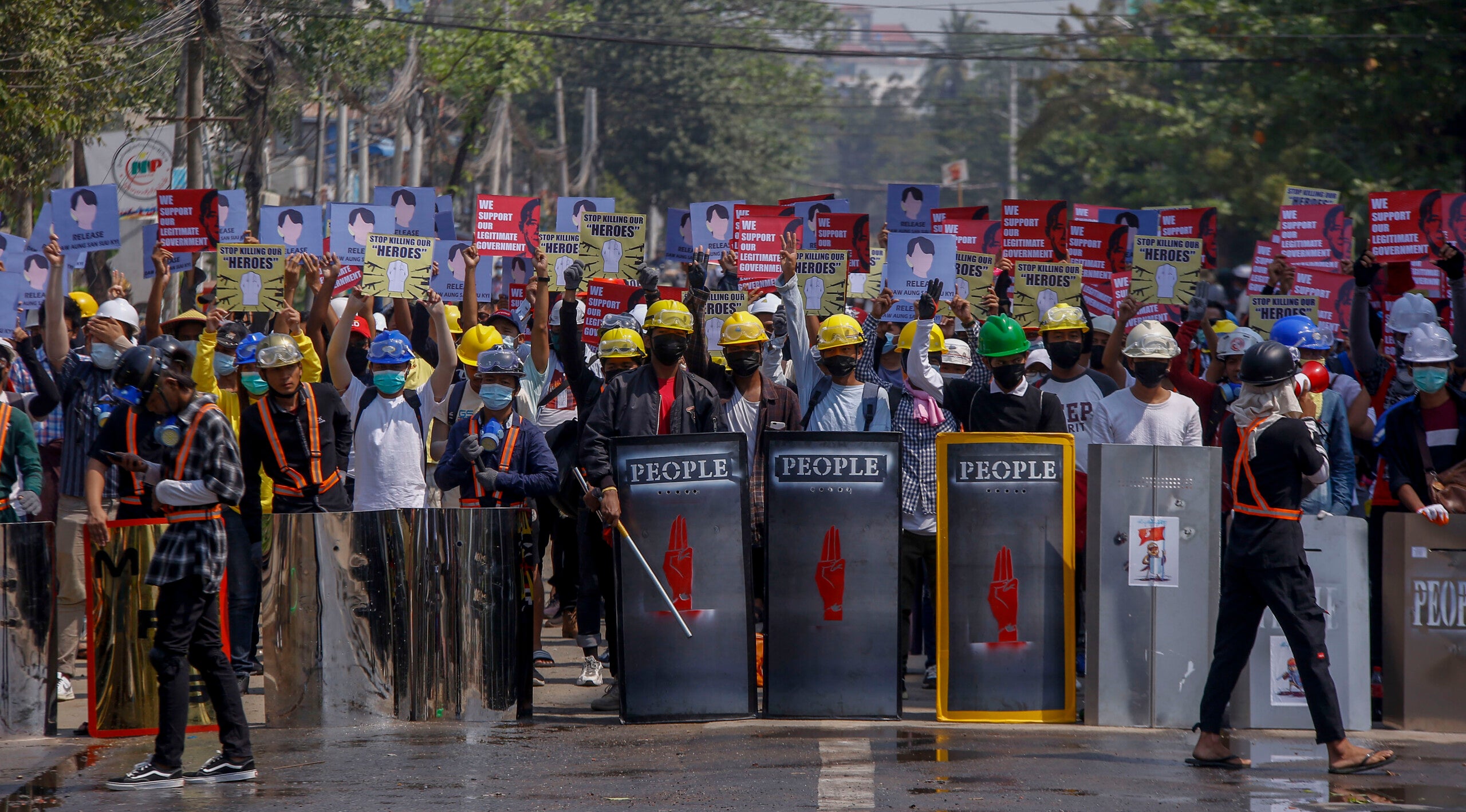 MANDALAY, Myanmar (AP) — About a thousand demonstrators against last month’s military seizure of power in Myanmar emerged cautiously Tuesday onto the streets of the country’s second-biggest city, those in the vanguard carrying homemade shields bearing images of the three-fingered salute, the movement’s symbol of defiance.

The protest in Mandalay took place even though security forces have shown little reluctance to use lethal force to break up crowds. Those who marched gathered for just a few minutes before dispersing to avoid a possible confrontation with riot police. Another group made a mobile protest, driving through the streets on motorbikes.

The protesters have adapted their tactics in response to escalating violence from security forces, including the firing of live ammunition at crowds. The government’s crackdown has left more than 50 protesters dead but has failed to slow the widespread protests against the Feb. 1 coup that ousted the elected government of Aung San Suu Kyi.

A school principal involved in the protest movement died Tuesday from unknown causes after being taken into custody by security forces, according to media reports and an activist who knew him.

The death of Zaw Myat Lin in custody was the second in recent days. He was a member of Suu Kyi’s National League for Democracy party.

The deaths of Zaw Myat Lin and Khin Maung Latt, a party activist detained on Saturday night whose body was retrieved from a military hospital the next day, have raised questions about whether the government is torturing and killing detainees. Witnesses said Khin Maung Latt’s body had wounds consistent with torture, according to New York-based Human Rights Watch.

Zaw Myat Lin was arrested Monday night as he tried to escape from a police raid, the Voice of Myanmar online news service and other media reported.

Maung Saungkha, an activist and friend of Zaw Myat Lin, said his family was summoned to retrieve his body on Tuesday and was not told how he died.

According to the Myanmar-based Assistance Association for Political Prisoners, more than 1,850 people have been arrested in connection with the coup. Dozens of journalists have been arrested, including Thein Zaw of The Associated Press, who has been charged under a public order law that carries a penalty of up to three years in prison.

In what has become a daily occurrence, protest marches were held Tuesday in cities and towns across the country, according to local news reports and social media.

Protests occurred in Ye, a town in Mon State in southern Myanmar; Kyaukpadaung, a town in central Myanmar; Mohnyin, a town in Kachin State in the north; and Myeik Taung, in the southeast. The authorities reportedly used force in each case.

Armed police carried out night patrols on Monday, yelling abuse, firing at buildings and making targeted arrests. The tactic appears to be aimed at spreading fear and disrupting sleep in order to weaken the resolve of those opposed to the army’s takeover.

One video recorded Monday night in a district of Yangon, the country’s biggest city, shows more than 20 police swarming down a street, around a corner and then opening fire. They return, point up at a window or balcony overlooking them and fire once again.

Their actions came during a dramatic night when thousands of residents broke the 8 p.m. curfew to show support for a group of protesters who had been trapped by police in an enclave of streets.

They came out of their homes, sang songs against the coup and banged pots, pans and other implements together, partly in the hope of diverting police from the hunted protesters, estimated to number 200.

Witnesses said several dozen of those who had sought shelter in the city’s Sanchaung neighborhood were arrested, but others made their way home at dawn, several hours after police withdrew from the area.

The authorities continued their assault on the media on Tuesday, raiding the offices of Kamayut Media and detaining its co-founder, Han Thar Nyein, and editor-in-chief, Nathan Maung. Some of the company’s protest coverage can be found on its YouTube channel.

A member of Han Thar’s family said that according to witnesses, seven military trucks were involved in the raid and took away office material and equipment as well as the two men. The family member was unaware of where the men were taken.

Maung studied film and video production and political science at the University of North Carolina at Greensboro before joining the media company.

The military also raided the offices of Mizzima News. No one was arrested in the raid, though equipment was vandalized and property was taken away.

The military government on Monday imposed a major curb on media coverage of the crisis. It announced that the licenses of five local media outlets — Mizzima, DVB, Khit Thit Media, Myanmar Now and 7Day News — had been canceled.

All five had been offering extensive coverage of the protests, often with livestreaming video online. The offices of Myanmar Now were raided by the authorities on Monday before the measure was announced.

DVB — short for Democratic Voice of Burma — said it was not surprised by the cancellation and would continue broadcasting on satellite TV and online.

“We worry for the safety of our reporters and our staff, but in the current uprising, the whole country has become citizen journalists and there is no way for military authorities to shut the information flow,” Executive Director Aye Chan Naing told AP.

“Revoking the licenses of independent media outlets that have been providing vital information about ongoing events in the country is a draconian measure that amounts to direct censorship and breaches fundamental rights and international standards, to which Myanmar has committed,” IPI Executive Director Barbara Trionfi said in a statement.