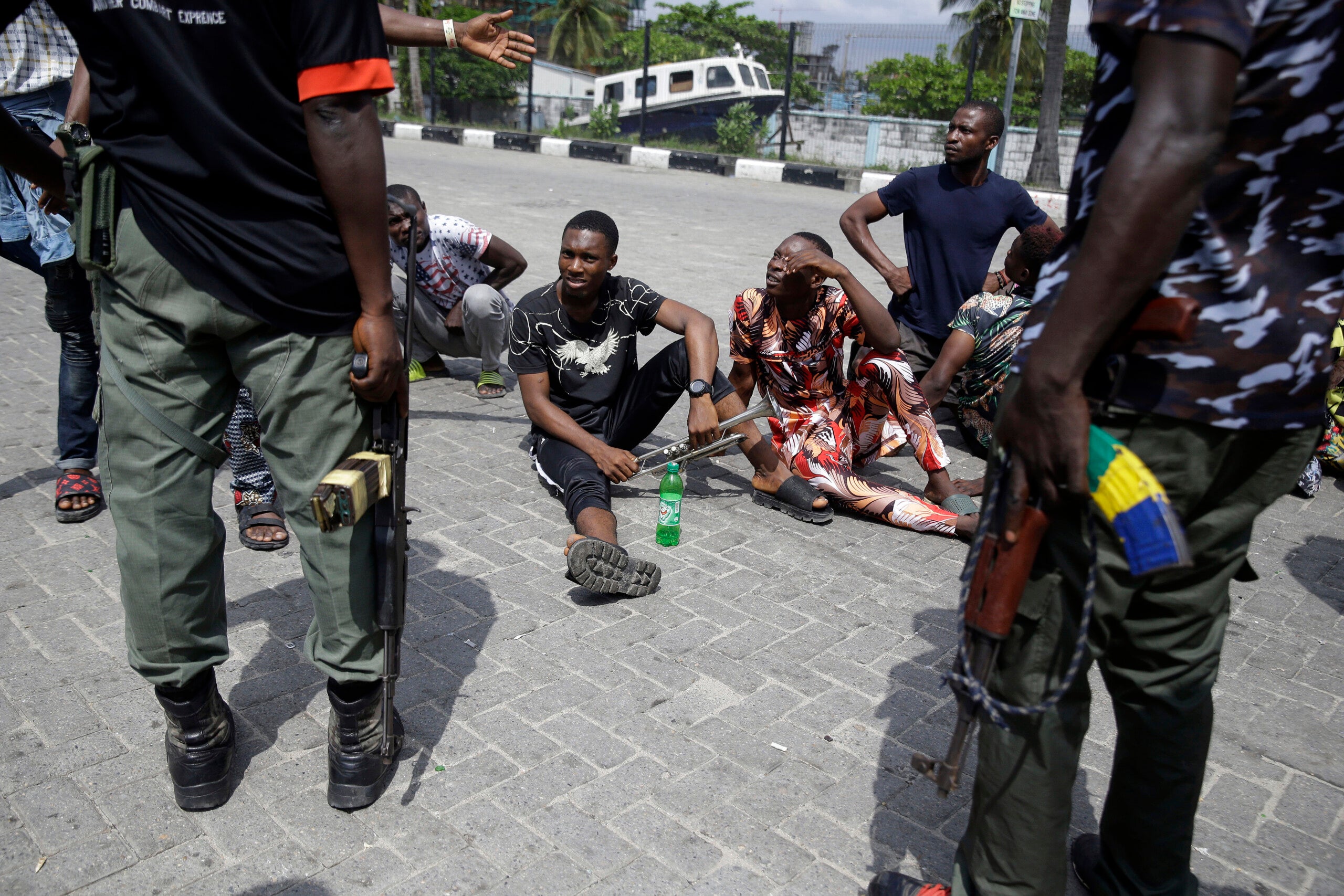 LAGOS, Nigeria (AP) — Nigeria’s president says 51 civilians have been killed in unrest following days of peaceful protests over police abuses, and he blames “hooliganism” for the violence while asserting that security forces have used “extreme restraint.”

Buhari also says 11 policemen and seven soldiers had been killed by “rioters” as of Thursday, and “the mayhem has not stopped.” He says another 37 civilians were injured. He was speaking to a special meeting with former heads of state and other officials on the way forward after some of Nigeria’s worst turmoil in years.

THIS IS A BREAKING NEWS UPDATE. THE PREVIOUS STORY IS BELOW.

“Many lives have been lost” in Nigeria’s unrest, the president’s office announced Friday, as the government said days of peaceful protests over police abuses had been hijacked by thugs.

President Muhammadu Buhari’s comments came during a meeting with former heads of state on how to address some of Nigeria’s worst unrest in years. The government has not said how many people died, though Amnesty International says soldiers killed at least 12 when they fired without warning into a crowd of protesters Tuesday night as they sang the national anthem.

Buhari in a national address Thursday night didn’t mention the shootings that sparked international outrage, and resentment lingered with the smell of charred tires Friday in Nigeria’s relatively calm streets.

The president instead warned protesters against being used by “subversive elements” and “undermining national security and law and order.” He reiterated that Friday, saying the government “will not fold its arms and allow miscreants and criminals continue to perpetrate acts of hooliganism,” a statement said.

A witness of Tuesday night’s deadly shooting, 33-year-old Isaiah Abor, ventured out anyway to visit the scene where solders had opened fire. He managed to escape the chaos.

“When (the soldiers) were making comments that the flag is not bulletproof, that’s when I knew this was going to go out of hand,” Abor said. Empty ammunition shells still littered the ground.

The president’s speech annoyed him. “The blood that stained a whole Nigerian flag, those youths were not even mentioned,” Abor said. He added: “We are not cowards. We will always come to this ground, and we will always feel for those that are gone.”

Okechukwu Nwanguma with the Rule of Law and Accountability Advocacy Center said the president’s comments,“devoid of sympathy,” were worrying. Shielding those behind the deadly shootings will only lead to abuses by the police and military, he said: “If those who carried out the killings did so and nothing happens, it will encourage them and others to do the same thing next time.”

But citing the president’s comments, one influential group behind the protests, the Feminist Coalition, urged youth to stay at home, saying that “we need to stay alive to pursue our dreams to build the future.” The group said it had stopped collecting donations for the protests.

Others disagreed. If the protests have been hijacked by hoodlums, then Nigerian youth should not give up the struggle and instead should “go back and re-strategize,” said Seriki Muritala with the National Youth Parliament.

This week’s scenes have touched a chord with Black Lives Matter supporters in the United States, while the U.S. government has strongly condemned the “use of excessive force by military forces who fired on unarmed demonstrators in Lagos, causing death and injury.”

The demonstrations began early this month with calls for Nigeria’s government to shut down the Special Anti-Robbery Squad, a police unit known as SARS. The squad was launched to fight crime, but it carried out torture and killings, according to Amnesty International.

The #EndSARS campaign spread across the country and Buhari’s government announced that it would disband the SARS unit. The protest persisted with demonstrators calling for more widespread reforms of the police and an end to corruption.

In one attempt at calming tensions, the Lagos state government on Friday shared a list of ongoing prosecution against police officers accused of human rights abuses.

“Today seems like a good day to get on to the work of rebuilding Lagos and ending police brutality,” Gov. Babajide Sanwo-Olu said.

An angry crowd shouted at him over the unrest as officials toured burned-out vehicles and the sacked palace of a Lagos ceremonial leader. The leader, or oba, isn’t popular with some Nigerians who see him as a product of the country’s often corrupt politics.

Opulence and grinding poverty are in close contact in Lagos, a city of some 20 million, and the inequality sharpens grievances in Nigeria, Africa’s most populous country.

After touring the battered city the governor told reporters he was “very traumatized” and that “we lost people in several parts of the city.” He didn’t give details.

“Enough is enough,” he said. “We need to heal ourselves.” He said the curfew would begin easing Saturday morning and a panel looking into the unrest would begin receiving petitions on Monday.

And yet tensions remained high. Near the scene of Tuesday’s shooting, police shouted, then fired into the air, to stop a convoy carrying the body of a Muslim who had died overnight; the cause of death was not clear.

After questioning by police, the mourners were allowed to continue, to go on and bury the dead.

Dr. Fauci is giving his personal 3D model of the coronavirus to the Smithsonian