WHO says prepare for local outbreaks; China slams US control 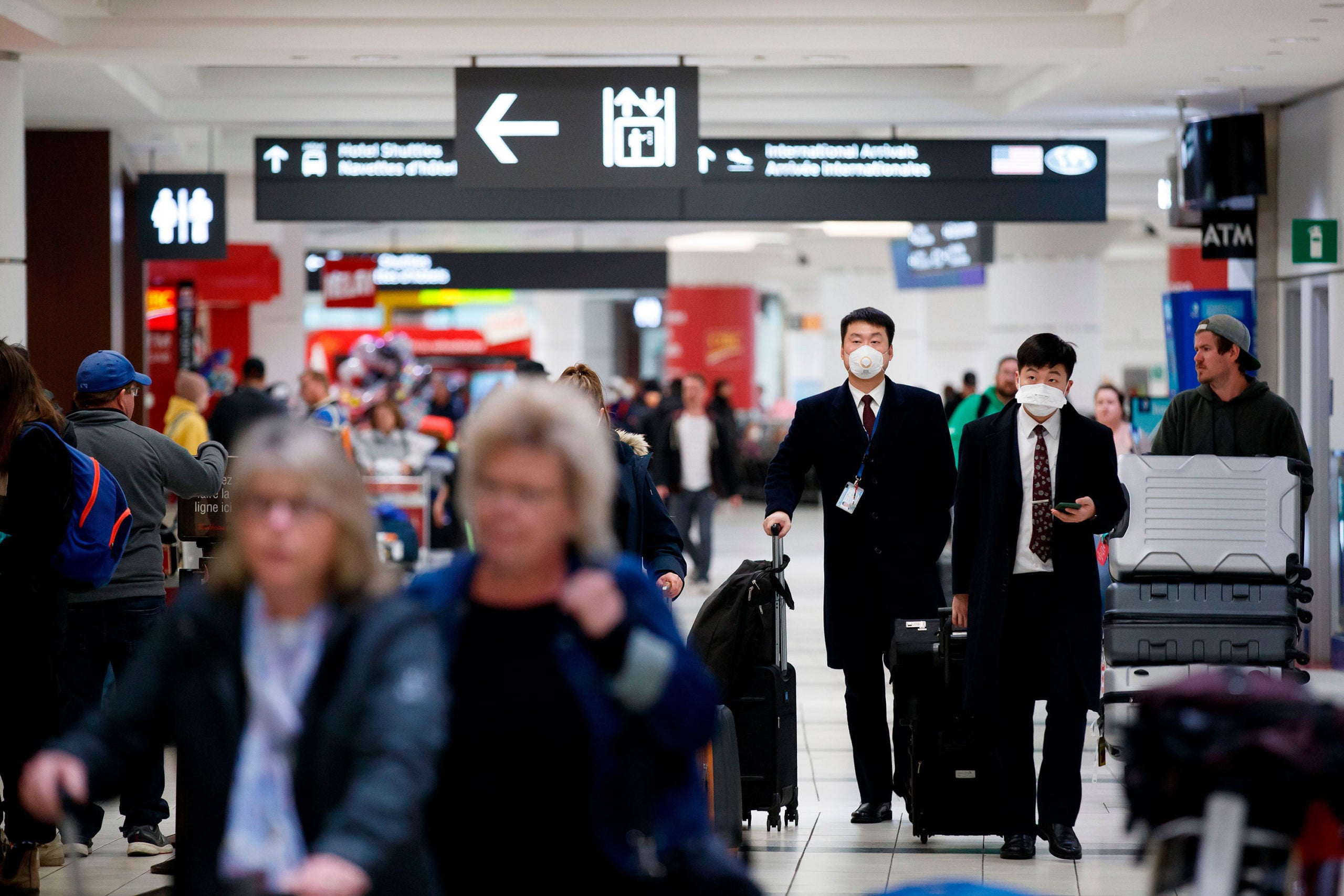 Flight crews are seen wearing masks at the international arrivals area at the Toronto Pearson Airport in Toronto, Canada, January 26, 2020. - Toronto Public Health confirmed Saturday that a case of the novel coronavirus that originated in Wuhan, China is currently being treated in a Toronto Hospital. (Photo by Cole BURSTON / AFP) (Photo by COLE BURSTON/AFP via Getty Images)
by: The Associated Press
Posted: Feb 1, 2020 / 06:42 AM EST / Updated: Feb 1, 2020 / 06:42 AM EST

BEIJING (AP) — China’s death toll from a new virus rose to 259 on Saturday and a World Health Organization official said other governments need to prepare for“domestic outbreak control” if the disease spreads in their countries.

Beijing criticized Washington’s order barring entry to most foreigners who visited China in the past two weeks.

Meanwhile, South Korea and India flew hundreds of their citizens out of Wuhan, the city at the center of an area where some 50 million people are prevented from leaving in a sweeping anti-virus effort. The evacuees went into a two-week quarantine. Indonesia also sent a plane.

The number of confirmed cases in China rose to 11,791, surpassing the number in the 2002-03 outbreak of SARS, or Severe Acute Respiratory Syndrome. The virus’s rapid spread in two months prompted the World Health Organization on Thursday to declare it a global emergency.

That declaration “flipped the switch” from a cautious attitude earlier to recommending governments prepare for the possibility the virus might spread, said the WHO representative in Beijing, Gauden Galea. Most cases reported so far have been people who visited China or their family members.

The agency acted out of concern for poorer countries that might not be equipped to respond, said Galea. Such a declaration calls for a coordinated international response and can bring more money and resources.

WHO said it was especially concerned that some cases abroad involved human-to-human transmission.

“Countries need to get ready for possible importation in order to identify cases as early as possible and in order to be ready for a domestic outbreak control, if that happens,” Galea told The Associated Press.

On Friday, the United States declared a public health emergency and President Donald Trump signed an order barring entry to foreign nationals, other than immediate family of American citizens and permanent residents, who visited China within the last 14 days, which scientists say is the virus’s longest incubation period.

China criticized the U.S. controls, which it said contradicted the WHO’s appeal to avoid travel bans, and “unfriendly comments” that Beijing was failing to cooperate.

“Just as the WHO recommended against travel restrictions, the U.S. rushed to go in the opposite way. Certainly not a gesture of goodwill,” said foreign ministry spokeswoman Hua Chunying.

WHO Secretary-General Tedros Adhanom Ghebreyesus said in Geneva that despite the emergency declaration, there is “no reason for measures that unnecessarily interfere with international travel and trade.”

Meanwhile, the ruling Communist Party postponed the end of the Lunar New Year holiday in Hubei province, where Wuhan is located, for an unspecified “appropriate extent” and appealed to the public there to stay home.

Another locked-down city in Hubei, Huanggang, on Saturday banned almost all of its residents from leaving their homes in the most stringent controls imposed yet. The government said only one person from each household would be allowed out to shop for food once every two days.

“Others are not allowed to go out except for medical treatment, to do epidemic prevention and control work or to work in supermarkets and pharmacies,” it said in an announcement.

China’s increasingly drastic anti-disease controls started with the Jan. 23 suspension of plane, bus and train links to Wuhan, an industrial center of 11 million people. The lockdown has spread to surrounding cities.

The holiday, China’s busiest annual travel season, ends Sunday in the rest of the country following a three-day extension to postpone the return to factories and offices by hundreds of millions of workers. The official Xinhua News Agency said people in Hubei who work outside the province also were given an extended holiday.

The party decision “highlighted the importance of prevention and control of the epidemic among travelers,” Xinhua said.

Americans returning from China will be allowed into the country, but will face screening and are required to undertake 14 days of self-screening. Those returning from Hubei province will be subject to a 14-day quarantine.

Beginning Sunday, the United States will direct flights from China to seven major airports where passengers can be screened.

Also Friday, Delta Air Lines and American Airlines suspended all flights between the United States and China. Other carriers including British Airways, Finnair and Hong Kong’s Cathay Pacific also have canceled or cut back service to mainland China.

The U.S. order followed a travel advisory for Americans to consider leaving China. Japan and Germany also advised against non-essential travel to China and Britain did as well, except for Hong Kong and Macao.

A plane carrying Indians from Wuhan landed Saturday in New Delhi. The government said they would be quarantined in a nearby city, Manesar. Sri Lanka also pulled out 33 more of its citizens and promised to bring out the remaining 204 students.

A special flight brought 312 Bangladeshis back from Wuhan, including eight who were hospitalized with high temperatures. The government says about 5,000 Bangladeshis study in China.

A Turkish military transport carrying 42 people left Wuhan for Ankara on Saturday. They reportedly showed no signs of infection.

An ER evacuation flight from Wuhan was also scheduled on Saturday.

South Korea’s second evacuation flight landed in Seoul with 330 people from Wuhan. They were to be screened for fever before being taken to two quarantine centers.

South Korea also reported its 12th virus case, which appeared to be a human-to-human transmission.

At least 23 countries have reported cases since China informed WHO about the new virus in late December.

The death rate in China is falling but the number of confirmed cases will keep growing because there are thousands of specimens from suspected cases yet to be tested, WHO’s Galea said.

“The case fatality ratio is settling out at a much lower level than we were reporting three, now four, weeks ago,” he said.

Both the new virus and SARS are from the coronavirus family, which also includes those that cause the common cold. Experts say there is evidence the new virus is spreading among people in China.

Although scientists expect to see limited transmission of the virus between people with family or other close contact, they are concerned about cases of infection spreading to people who might have less exposure.

In Japan, a tour guide and bus driver became infected after escorting two tour groups from Wuhan. On Saturday, Japan reported its 17th case, a woman in her 20s who also worked as a guide for Wuhan tourists on the same bus as the two other cases.

In Germany, five employees of a German auto parts supplier became ill after a Chinese colleague visited, including two who had no direct contact with the woman. She showed no symptoms until her flight back to China. On Friday, Germany confirmed a sixth case, a child of one of the people already infected.

Vietnam confirmed one more case for a total of six, and Australia counted its ninth infection.

Spain reported its first detected case, a German man who had close contact with an infected person in Germany and then traveled to the Canary Islands with some friends. Four friends who were hospitalized with him have not shown symptoms.

In the United States, health officials issued a two-week quarantine order for the 195 Americans evacuated this week from Wuhan.

It was the first time a federal quarantine has been ordered since the 1960s, when one was enacted over concern about smallpox, the Centers for Disease Control and Prevention said.

None of the Americans being housed at a Southern California military base has shown signs of illness, but infected people don’t show symptoms immediately and may be able to pass on the virus before they appear sick.