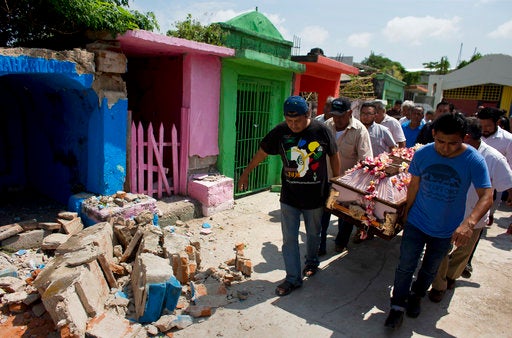 JUCHITAN, Mexico (AP) – Slow-moving funeral processions converged on Juchitan’s cemeteries from all directions on Saturday, so many that they sometimes caused temporary gridlock when they met at intersections.

A monster earthquake and a Gulf coast hurricane have combined to take at least 66 lives in Mexico, and no place suffered more than the Oaxaca state city of Juchitan, where 36 died as buildings collapsed in the magnitude 8.1 temblor.

The graveyard swelled with mourners and blaring serenades for the dead – the sounds of snare drums, saxophones and sobbing. Pallbearers carried the caskets around rubble the quake had knocked from the simple concrete crypts. Jittery amid continued aftershocks, friends and relatives of the deceased had hushed conversations in the Zapotec language as they stood under umbrellas for shade from the beating sun.

Paulo Cesar Escamilla Matus and his family held a memorial service for his mother, Reynalda Matus Martinez, in the living room of her home, where relatives quietly wept beside her body.

The 64-year-old woman was working the night shift at a neighborhood pharmacy when the quake struck Thursday night, collapsing the building.

“All the weight of the second floor fell on top of her,” said her son, who rushed to the building and found her under rubble. He and neighbors tried to dig her out, but weren’t able to recover her body until the next morning when civil defense workers brought a backhoe that could lift what had trapped her.

Fearful of crime, the pharmacy kept its doors locked, and Escamilla Matus wondered if that had cost his mother the time she needed to escape.

Scenes of mourning were repeated over and over again in Juchitan, where a third of the city’s homes collapsed or were uninhabitable, President Enrique Pena Nieto said late Friday in an interview with the Televisa news network. Part of the city hall collapsed.

The remains of brick walls and clay tile roofs cluttered streets as families dragged mattresses onto sidewalks to spend a second anxious night sleeping outdoors. Some were newly homeless, while others feared further aftershocks could topple their cracked adobe dwellings.

Rescuers searched for survivors with sniffer dogs and used heavy machinery at the main square to pull rubble away from city hall, where a missing police officer was believed to be inside.

The city’s civil defense coordinator, Jose Antonio Marin Lopez, said similar searches had been going on all over the area.

Teams found bodies in the rubble, but the highlight was pulling four people, including two children, alive from the completely collapsed Hotel Del Rio, where one woman died.

“The priority continues to be the people,” Marin said.

Larissa Garcia Ruiz was grateful to escape with only a broken arm when her house collapsed as she and her family slept.

“I only woke up when I heard screaming,” said the 24-year-old cradling her wrapped arm.

Her mother managed to push the daughters and her blind husband through the back doorway before a massive section of thick wall fell, trapping her. As Larissa tried to help rescue her mother, another piece of rubble fell, breaking her arm. Other relatives and friends finally managed to release the trapped woman.

All around them people yelled for help that night. “Nobody helped us,” her sister Vicenta said. “Everybody got out as best they could.”

In addition to the deaths in Juchitan, the quake killed nine other people in Oaxaca and 19 in neighboring states. Two others died in a mudslide in the Gulf coast state of Veracruz after Hurricane Katia hit late Friday.

Pena Nieto said authorities were working to re-establish supplies of water and food and provide medical attention to those who need it. He vowed the government would help rebuild.

Power was cut at least briefly to more than 1.8 million people due to the quake, and authorities closed schools in at least 11 states to check them for safety.

The Interior Department reported that 428 homes were destroyed and 1,700 were damaged just in Chiapas, the state closest to the epicenter.

Veracruz Gov. Miguel Angel Yunes said two people died in a mudslide related to the storm, and he said some rivers had risen to near flood stage, but there were no reports of major damage.

More than 4,000 people evacuated parts of Veracruz and neighboring Puebla states ahead of the storm’s arrival.

The Hurricane Center said Katia could still bring 3 to 6 inches (7.5 to 15 centimeters) of additional rain to a region with a history of deadly mudslides and flooding.