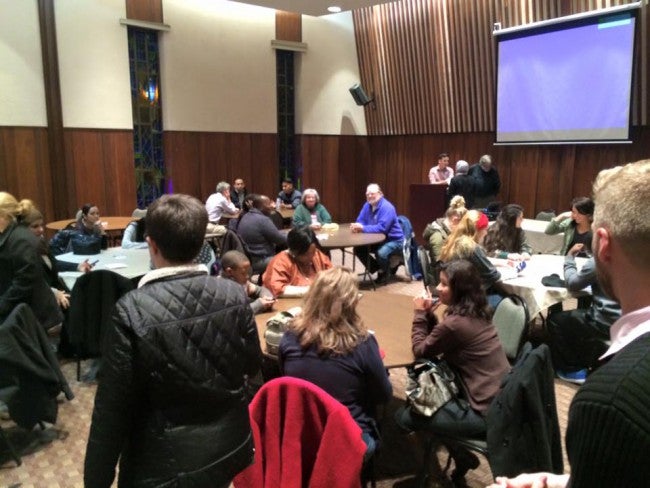 INDIANAPOLIS (WISH) — Since the Paris terror attacks, feelings have been mixed over whether to welcome refugees from certain regions into the United States.

The U.S. House of Representatives recently passed tough new regulations meant to limit the number of Iraqi and Syrian refugees.

That legislation is now pending in the Senate.

This issue hits home for the refugees living in Indiana.

On Wednesday night, a group of local college students held a dinner in support of the families now living in the Hoosier state.

The dinner was called a “Multicultural Friendship Feast” and was organized by IUPUI students.

The group raised nearly $600 on GoFundMe for the event, to host the refugees from across the world.

Shimaa Aldulaimi arrived in the U.S. from Iraq one year ago.

“After three years of trying to apply, we came to the United States and we came to Indiana through Exodus,” the mother of three said.

She said despite negative national conversation, she has felt welcome in the U.S.

“The way people treat me here in Indiana is very well, I am treated very well here,” Aldulaimi said.

She is grateful to be in this country for her children’s education.

“I’m very happy to be here especially in Indiana because the schools here are great,” she said.

And she’s grateful for friends like these IUPUI students, including Angie Lyon.

“Our goal in this is just to say there are people in Indianapolis that support you,” Lyon said.

She helped organize the community dinner for her IUPUI civic participation class.

She said she gets emotional when thinking about the journey these families take to come here.

“They’re just literally picking up their children and walking out their door never to go home again,” Lyon said.

She hopes more people speak up in support of the refugee families.

“These people need our help and we’re not doing them any favors by keeping them secluded, but rather let’s tell them there are people here that support you,” Lyon said.

“I feel very appreciated that events like this happen and it makes me feel even more welcome,” Aldulaimi said.

The IUPUI class is hosting another event Wednesday, Dec. 9 at 6 p.m. at the Center for Interfaith Cooperation in Indianapolis.

It’s going to focus on what Indianapolis will look like in 200 years in regards to culture, technology and sustainability.