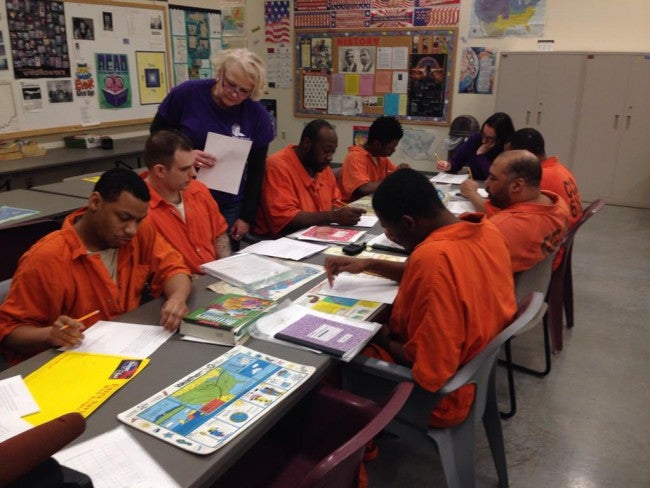 INDIANAPOLIS (WISH) – A program that aims to give Marion County Jail inmates a brighter future faces an uncertain future of its own.

Travis DiNicola, Executive Director of Indy Reads, said the loss of a grant has the organization searching for alternative funding solutions.

“I’m feeling very optimistic that we’re going to be able to keep the program going,” he said.

Patrick Hardy hopes so. The 19-year-old inmate said the class has helped him stay out of trouble while behind bars and is preparing him to earn the equivalent of his high school GED.

“A brighter future is what we’re looking for,” he said.

DiNicola said that’s the point of the program. It’s been in place since 2009.

“This (program) is a great opportunity for us to connect with them and say, ‘Look. When you get out, if you want to stay out of jail, then you need to figure out how to get a job and how to apply for a job and do those things that require reading and writing,'” said DiNicola. “We’re able to go in there and really provide some intensive programs to help them.”

The programs focus on reading and writing along with interpersonal skills.

DiNicola said the program is also improving public safety. Within six months of leaving jail, he said about 19-percent of students who took part in the program end up back behind bars compared to twice that among other prisoners.

“If you can work with these people and help them from getting into trouble again, then you’re really helping them to stay on a path that’s going to make the community safer for everybody,” he said.

Since the loss of the grant, though, Indy Reads has had to scale back some classes as it searches for other funding sources.

“We’ve been able to pull other funds from some of our other programs to make sure we can keep going on,” he said. “We hope that if we can find some alternative funding by this summer then we won’t even have to talk about closing the program down.”

DiNicola said the program requires about $75,000 a year.

“This class is really helping people,” said Hardy. “If they take that away it’ll be like them taking away all that people can look forward to to helping themselves.”