2020 Census being printed without citizenship question 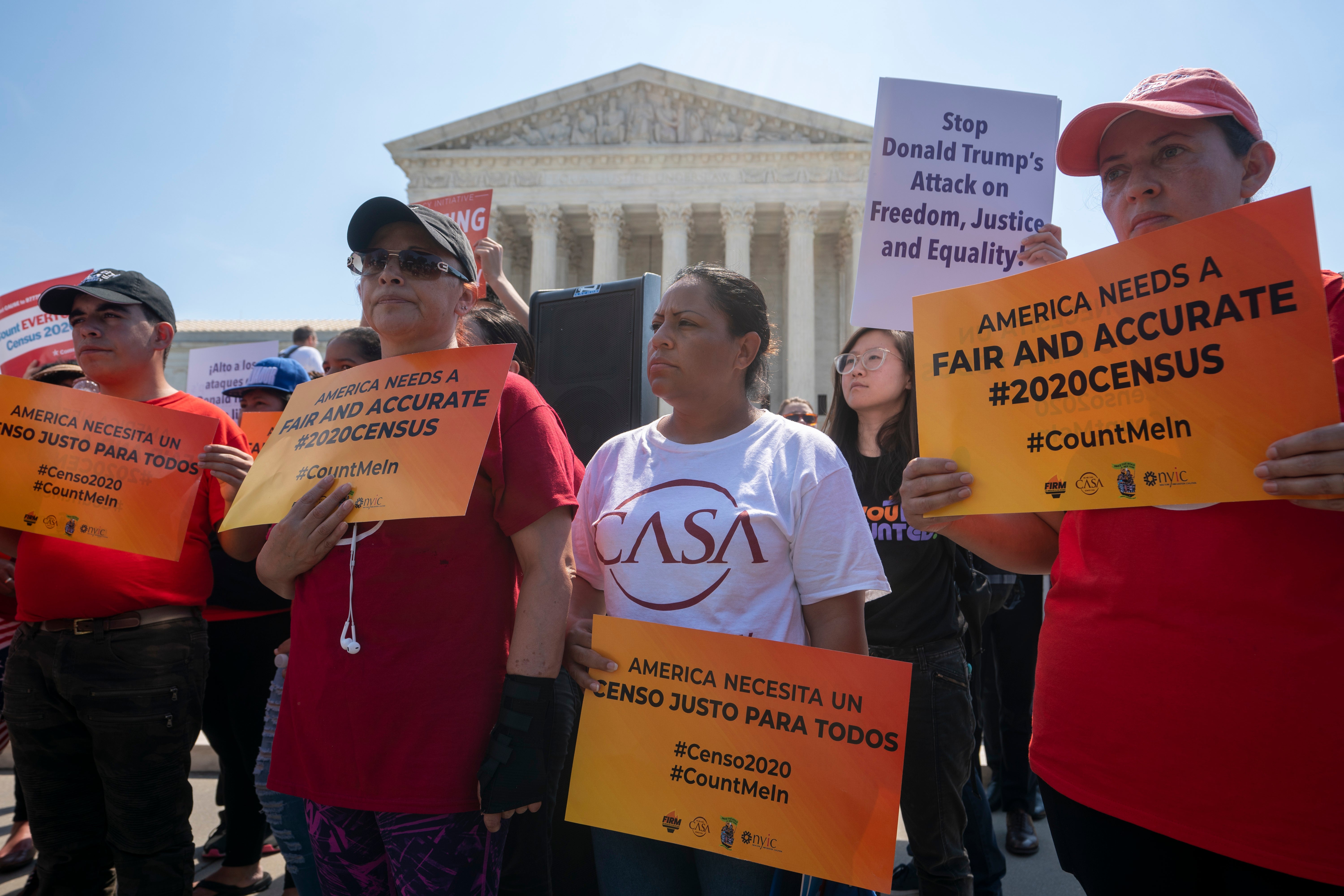 Demonstrators gather at the Supreme Court as the justices finish the term with key decisions on gerrymandering and a census case involving an attempt by the Trump administration to ask everyone about their citizenship status in the 2020 census, on Capitol Hill in Washington on June 27, 2019. (AP Photo/J. Scott Applewhite)
by:
Posted: Jul 2, 2019 / 09:52 PM EST / Updated: Jul 2, 2019 / 10:19 PM EST

WASHINGTON (AP) — Days after the U.S. Supreme Court halted the addition of a citizenship question to the 2020 Census, the U.S. Census Bureau on Tuesday started the process of printing the questionnaire without the controversial query.

Trump administration attorneys notified parties in lawsuits challenging the question that the printing of the hundreds of millions of documents for the 2020 counts would be starting, said Kristen Clarke, executive director of the National Lawyers’ Committee for Civil Rights Under Law.

Justice Department spokeswoman Kelly Laco confirmed there would be “no citizenship question on 2020 census.”

Commerce Secretary Wilbur Ross said that while he respected the Supreme Court’s decision, he strongly disagreed with it.

“The Census Bureau has started the process of printing the decennial questionnaires without the question,” Ross said in a statement. “My focus, and that of the Bureau and the entire Department is to conduct a complete and accurate census.”

President Donald Trump had said after the high court’s decision last week that he would ask his attorneys about possibly delaying next spring’s decennial census until the Supreme Court could revisit the matter, raising questions about whether printing of the census materials would start as planned this month.

For months, the Trump administration had argued that the courts needed to decide quickly whether the citizenship question could be added because of the deadline to starting printing materials this week.

Even though the Census Bureau is relying on most respondents to answer the questionnaire by Internet next year, hundreds of millions of printed postcards and letters will be sent out next March reminding residents about the census, and those who don’t respond digitally will be mailed paper questionnaires.

“The Supreme Court’s ruling left little opportunity for the administration to cure the defects with its decision to add a citizenship question and, most importantly, they were simply out of time given the deadline for printing forms,” Clarke said in an email.

Opponents of the citizenship question said it would discourage participation by immigrants and residents who are in the country illegally, resulting in inaccurate figures for a count that determines the distribution of some $675 billion in federal spending and how many congressional districts each state gets.

The Trump administration had said the question was being added to aid in enforcement of the Voting Rights Act, which protects minority voters’ access to the ballot box. But in the Supreme Court’s decision, Chief Justice John Roberts joined the court’s four more liberal members in saying the administration’s current justification for the question “seems to have been contrived.”

Democratic mayors and governors opposed to the question argued that they’d get less federal money and fewer representatives in Congress if the question was asked because it would discourage the participation of minorities, primarily Hispanics, who tend to support Democrats.

Attorneys general for two of the largest states controlled by Democrats praised the decision to abandon the citizenship question.

“While the Trump Administration may have attempted to politicize the census and punish cities and states across the nation, justice prevailed, and the census will continue to remain a tool for obtaining an accurate count of our population,” said New York Attorney General Letitia James.

“It’s an investment of time and resources that we have not seen, and this administration is dragging its feet,” Becerra said.

Top congressional Democrats hailed Tuesday’s news. House Speaker Nancy Pelosi called it “a welcome development for our democracy,” while Senate Minority Leader Chuck Schumer promised his party “will be watching the Trump administration like a hawk to ensure there is no wrong-doing throughout this process and that every single person is counted.”

Dale Ho, who argued the Supreme Court case as director of the American Civil Liberties Union’s Voting Rights Project, said, “Everyone in America counts in the census, and today’s decision means we all will.”