Local company a part of the Indy 500 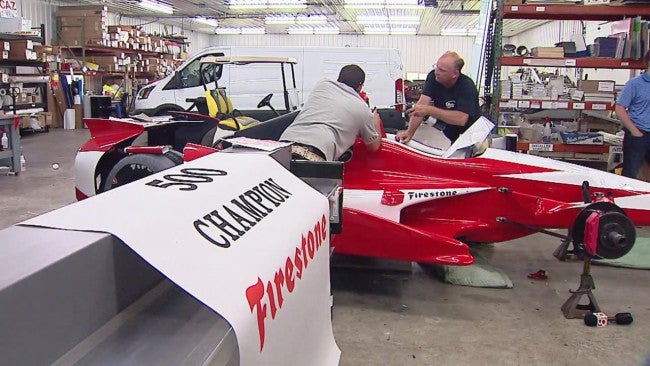 WHITESTOWN, Ind. (WISH) – In a small workshop in Whitestown, a local company has a stake in the Indianapolis 500.

Indy’s Pro Graphix, owned and operated by racing fan Mark Robinson, has been wrapping not only mailboxes, fire trucks and other vehicles, but also race cars. It started with the Bettenhausens 20 years ago. After that, word got out, and Robinson has been busy every May since.

“It’s hard to bring it all,” said Robinson. “We do bits and pieces, wrap Ganassi trailers, do a few of their cars, small car wraps.”

A.J. Foyt has kept Robinson’s crew on its toes with the red, white, and blue 41 car of Jack Hawksworth, Takuma Sato’s ABC supply number 14 car, and the cool black 48 car of Alex Tagliani.

Years ago, Robinson’s only option was paint, but now with applied vinyl graphics, he can do in two days with three guys what used to take weeks.

“This way if they scratch a sidepod, we have a replacement right here,” Robinson said. “They don’t have to take it to the paint shop to get it done.”

With the 33 car field set, the team is working on an Helio Castroneves’ show car that will sit in the lobby of the JW Marriott. Armed with heating torches, X-ACTO knives and smoothing tools, the Penske 3 car will look like it’s ready to hit the track.

And while most fans watch the competition on race day, Robinson sees it differently.

“We look of course for the work we’ve done, and we root for the teams we’ve had our hands on,” Robinson said. “We pray that nothing blows off when they go 230 on the straightaway.”