Mayor Jessup under fire in Lawrence 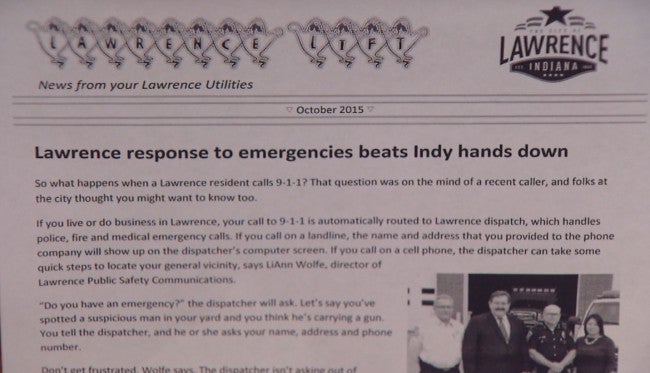 Jessup, a Democrat, says his opponents are putting the city in a negative light.

The mayor is an incumbent and the favorite to win a second term in Lawrence.

But you don’t get re-elected there without a battle.

Republican Steve Collier made an effort to put some pressure on Jessup Monday with a news conference at Fire Station 40.

It’s near Fort Harrison and mostly unmanned, leading to longer response times, according to Collier.

In an insert in Lawrence water bills, Mayor Jessup boasts that response times are faster than they are in the Indianapolis Fire Department service area.

Collier disputes that and charges that the insert amounts to using taxpayer money for campaign purposes.

“Jessup states that LFD’s emergency run times are half that of IFD,” he said, “yet in every measurable comparison, IFD’s run times were slightly faster than LFD.”

Collier said he may ask for an investigation into the water bill inserts but wasn’t specific about when he might do that.

Jessup has issued a statement accusing Collier of lies and nasty politics.

His campaign manager says the water bill inserts are a way to communicate with residents that has been employed since Jessup took office.