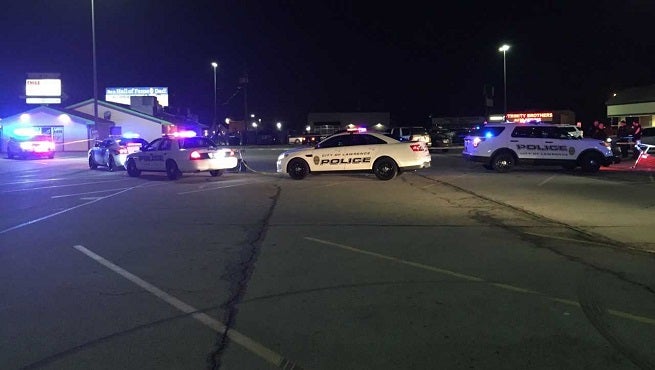 LAWRENCE, Ind. (WISH) — A confrontation between two groups of people may have led to a fatal shooting of a man Friday night in the parking lot of a Lawrence shopping center.

Officers with the Lawrence Police Department responded around 6:30 p.m. Friday to a report of shots fired in the parking lot of Esquire Plaza shopping center, 8101 Pendleton Pike. That’s just east of Interstate 465 and North Franklin Road.

Officers arrived to find the man with a gunshot wound.

Another man injured in the shooting showed up about 7 p.m. at Community North Hospital on the Indianapolis northeast side. The wound was not believed to be life-threatening, police said.

Deputy Chief Gary Woodruff of Lawrence Police Department said the incident is believed to be isolated.

Woodruff said the confrontation involved two groups with three or four people total. The initial investigation found at least one person in the two groups pulled out a gun for some reason. After the shooting began, some fled on foot and others drove off in vehicles.

Police did not provide any other informaton on the case. Investigators had left the scene by 10:30 p.m. Friday.

If the death is confirmed as a criminal homicide, it would be Lawrence’s first this year. In 2018, the city had seven homicides.

Friday night’s shooting is the second at a Marion County shopping center this week. A 15-year-old robber was shot dead Wednesday afternoon at a shopping center in the Irvington neighborhood on the city’s east side. No criminal charges have been filed in that incident that occurred shortly after 3:35 p.m. at the EZPawn store at Irvington Plaza Shopping Center, 6241 E. Washington St.