Man shot at TV station charged with arson, other charges 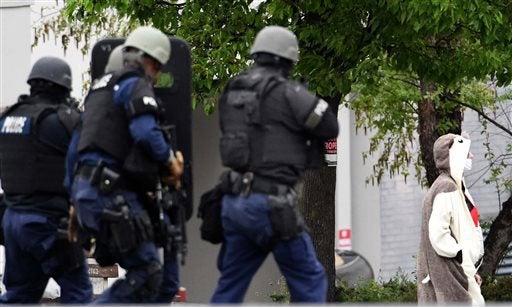 BALTIMORE (AP) – Criminal charges have been filed against a man shot and wounded by police after walking into a Baltimore TV station wearing an animal costume and a fake bomb, authorities said Friday.

Davis said Brizzi walked into the vestibule of Baltimore’s Fox 45 TV station just before 1:30 p.m. on Thursday wearing a hedgehog costume and a surgical mask “associated with Japanese anime culture,” with a red vest strapped to his torso. Brizzi left the vestibule about 3 p.m., and refused to comply with officers’ commands to put his hands up in the air. Brizzi was shot at least three times by police. He was taken to University of Maryland Shock Trauma and is expected to survive his wounds.

Before entering the station, Brizzi set his own car on fire.

Davis said a search warrant was executed on both Brizzi’s home and his car, and that no explosives or replica explosives were found. He said the event is in no way connected to any type of organized terrorism.

Brizzi’s father said his son believed the world was ending and might have been trying to get the message out.

Edward Brizzi of Elkridge, Maryland, told news outlets after the shooting on Thursday that his son had a breakdown two weeks ago and said he had a vision from God that the world would end next month. His son was shot four times, but is expected to survive, he said.

“I think what it is, he wanted to go to a media outlet so he pass his message on that the world’s going to end on June the third,” Edward Brizzi said in an interview with the TV station.

Alex Brizzi gave a flash drive to a security guard and told him he wanted the station to broadcast its contents. Police later determined that what Brizzi claimed to be a bomb consisted of aluminum-wrapped chocolate bars duct-taped to a flotation device. Smith said police don’t know what was on the drive.

Police said Alex Brizzi barricaded himself inside the station after it was evacuated and his car became engulfed in flames outside as police, fire, arson, bomb squad and SWAT teams arrived. Police don’t know what caused the fire.

Brizzi then walked out of the building and into the street, where he ignored heavily armed officers’ orders to show his hands. Police shot him and then communicated with him via a bomb-detecting robot.

When the Brizzi removed the fake bomb, paramedics rushed to him and put him in an ambulance, Smith said.

About two weeks ago, Alex Brizzi broke up with his girlfriend and appeared to have a breakdown, Edward Brizzi told news media outlets. He was found sleeping in a neighbor’s yard and it took seven police officers to hold him down as he was taken to a local hospital, he said.

Brizzi said his son, who lives in the basement of his home, had been reserved since his breakdown, but he didn’t have any way of making a bomb and his father didn’t know he was planning anything like this.

“What he was doing was probably putting himself out there thinking that he wanted to die, I think,” he told the station.

He said his wife found something with wires in their son’s room Wednesday night when Alex Brizzi was out, but they didn’t think anything of it, Edward Brizzi said.

“It just didn’t connect,” he said.

Brizzi said he agrees with how police handled the situation.

“They’ve got to do their job; they can’t assume it’s candy bars wrapped around his side,” he said. “I’m a firm believer in police.”

Brizzi said he and his wife couldn’t force their son to get treatment after his breakdown since he is an adult, but he said he believes Alex Brizzi will go to a mental health center after he recovers from his physical wounds.

“We really didn’t think he was a risk to himself and he’s never been a risk to anyone else,” he said.