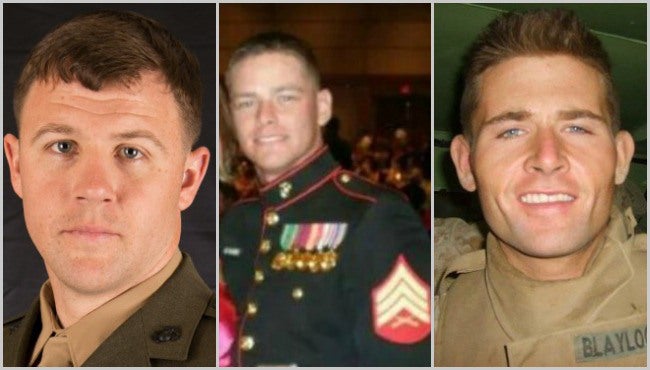 WARREN, Mich. (AP/WOOD) – Funeral services take place this week for two of three Michigan Marines killed in a Black Hawk helicopter crash off the coast of Florida during a training mission earlier this month, but flags will not be lowered in their honor.

Staff Sergeants Marcus Bawol of Warren, Trevor Blaylock of Lake Orion and Andrew Seif of Holland were among seven Marines and four Army soldiers killed March 10 when the helicopter crashed along Florida’s Panhandle in a nighttime training exercise in dense fog.

Gov. Rick Snyder decided not to order flags lowered to half staff for Bawol, Blaylock and Seif because they did not die overseas or in combat.

The governors of New Jersey, Louisiana and North Carolina – all of which lost service members in the crash – have ordered flags lowered.

Thursday, Snyder’s office defended the decision, saying flags won’t be lowered because of “protocol developed with the Michigan Department of Military Affairs.”

About 200 people attended the 26-year-old’s Bawol’s funeral Thursday at St. Louise de Marillac Church in Warren. He was a 2006 graduate of nearby Warren Mott High School.

A funeral for Blaylock is at 11 a.m. Saturday at Lake Orion United Methodist Church. Hundreds lined the streets Wednesday as his body was brought to a funeral home.

Funeral arrangements for Seif, a Silver Star recipient, have not been announced.

“The crash that claimed the lives of the Marines, including three from Michigan, is a tragic loss for our country and our state. It’s another reminder that the men and women serving our country make tremendous sacrifices and put themselves in harm’s way every day to keep us safe and protect our freedoms.“The current Michigan flag protocols were developed with the Michigan Department of Military Affairs and call for flags to be lowered across the state when members of the armed forces are lost in combat.“Gov. Snyder has been reaching out personally to the families of the three Marines to express his condolences on behalf of the entire state. We know the families are so proud of these Marines, and so are their entire communities. They are, unquestionably, heroes. Staff Sgt. Andrew Seif earned a Silver Star for his brave actions under enemy fire in Afghanistan, and will serve as an inspiration for many in the Holland area and beyond.”