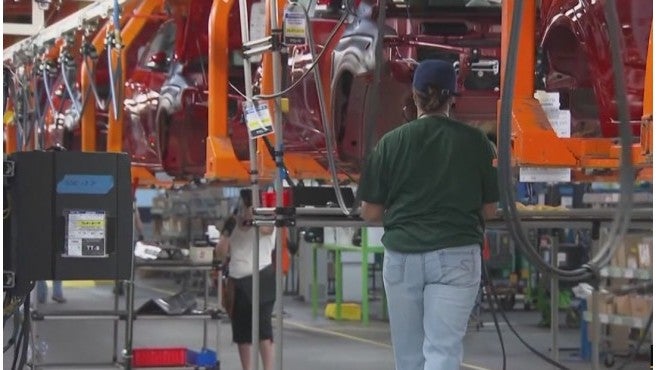 Retaliatory tariffs from Canada, Mexico and China go into effect this week.

Even strong supporters of the president have begun to worry aloud about potential damage to businesses and workers in their states. Those supporters include Rep. Bradley Byrne, a Republican from Alabama.

“We’re getting close to the point where this might actually start hurting workers in Alabama,” Byrne said.

On Sunday, new tariffs on U.S. exports to Canada went into effect. They target nearly $13 billion in American goods, from iron and steel to maple syrup and whiskey.

“We are beginning to communicate to the White House our concern,” Byrne said.

In addition to Canada, Mexico and China are set to impose their own new tariffs on agricultural products including pork and soybeans later this week. The three nations say they’re retaliating for President Trump’s tariffs.

Peter Navarro is one of the president’s top trade advisers.

“This president is going to do what needs to be done,” Navarro said. “He will have the backs of Americans.”

But, U.S. Sen. Lamar Alexander, a Republican from Tennessee, said the administration’s tactics are harming his state. He pointed to the decision to delay the expansion of an appliance manufacturing plant because of the tariffs.

“Tariffs are taxes that will hurt Tennessee incomes,” Alexander said.

Tennessee’s other Republican senator, Bob Corker, has been working on a bill to reign in the president’s tariff powers.

“It doesn’t appear to me that they have much of a plan,” Corker said. “It’s kind of an emotional whatever-they’re-thinking-that-day kind of thing.”

But, the Trump administration insisted current trade deals favor foreign countries and the hard-line stance is part of the effort to change that.