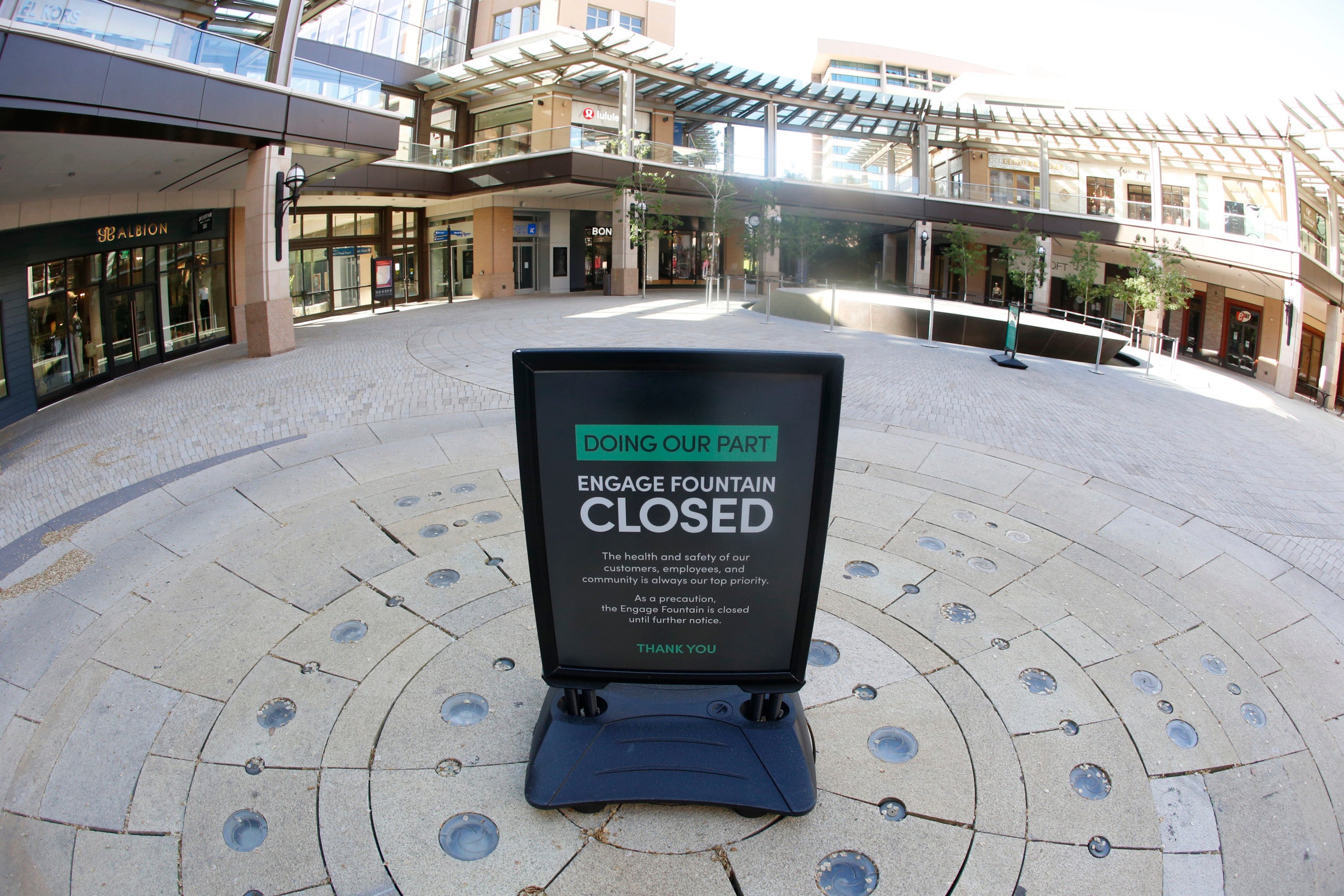 FILE - In this May 4, 2020 file photo, A "Doing Our Part" sign is shown at City Creek Center in Salt Lake City. Mall owner Simon Properties said Wednesday, June 20, 2020 that it is pulling out of its $3.6 billion to buy rival Taubman, citing the coronavirus pandemic which has forced many malls to temporarily close their doors. It is the second major retail deal to fall apart due to the pandemic. (AP Photo/Rick Bowmer, File)
by: JOSEPH PISANI, AP Retail Writer
Posted: Jun 10, 2020 / 04:02 PM EST / Updated: Jun 10, 2020 / 04:21 PM EST

NEW YORK (AP) — The nation’s largest mall owner is backing out of a $3.6 billion deal to buy a major rival as the coronavirus pandemic shakes the retail industry.

Simon Property Group announced it would buy Taubman in early February, just weeks before the Centers for Disease Control and Prevention announced the first known case of coronavirus in the U.S. Clothing stores and malls nationwide were ordered to close the following month.

In its legal complaint Wednesday, Simon said that Taubman is uniquely vulnerable as stores reopen because most of its properties are indoor malls “that many consumers will avoid.” Simon also said Taubman broke its contract obligations by taking on more debt during the pandemic rather than cutting costs.

Taubman plans to fight Simon, calling its legal claims “invalid and without merit.” It plans to go ahead with a shareholder vote on the deal later this month at its headquarters in Bloomfield Hills, Michigan.

The pandemic has created more havoc in an already stressed retail environment, particularly for malls. Last month, a private equity firm backed out of a deal to buy Victoria’s Secret. That chain had moved aggressively into malls at the direction of its parent company’s founder Les Wexner, who wanted to push lingerie into the mainstream.

Malls have struggled for years as shopping moved online and consumers grew tired of them. Their plight even inspired a haunting YouTube channel called the Dead Mall Series.

The coronavirus has delivered a devastating blow to those that remain and also stores with a big mall footprint. J.C. Penney, Neiman Marcus and J.Crew, have all filed for bankruptcy protection this year.

In malls that have reopened, drinking fountains are disabled or taped off, play areas for kids are closed, and sitting in a food court is done at a distance from other humans.

Retail consultant Jan Rogers Kniffen believes that within two years, half of the 1,000 malls in the U.S. will either close or be unrecognizable. Before the pandemic, he expected only 300 to close, and that decline would take place over a decade.

CBL, a Chattanooga, Tennessee, mall operator with 108 properties, warned this month that it may fail.

On Wednesday, shares of any retail chain with stores in malls plummeted. Kohl’s, Macy’s, The Gap and Abercrombie & Fitch all slumped sharply.

Simon, based in Indianapolis, owns or has a stake in more than 200 properties in the U.S. as of last year. Taubman Centers owns, manages or leases 26 shopping centers in the U.S. and Asia, including The Mall at Short Hills in New Jersey, and Waterside Shops in Naples, Florida.