AP sources: US report makes no definitive finding about UFOs 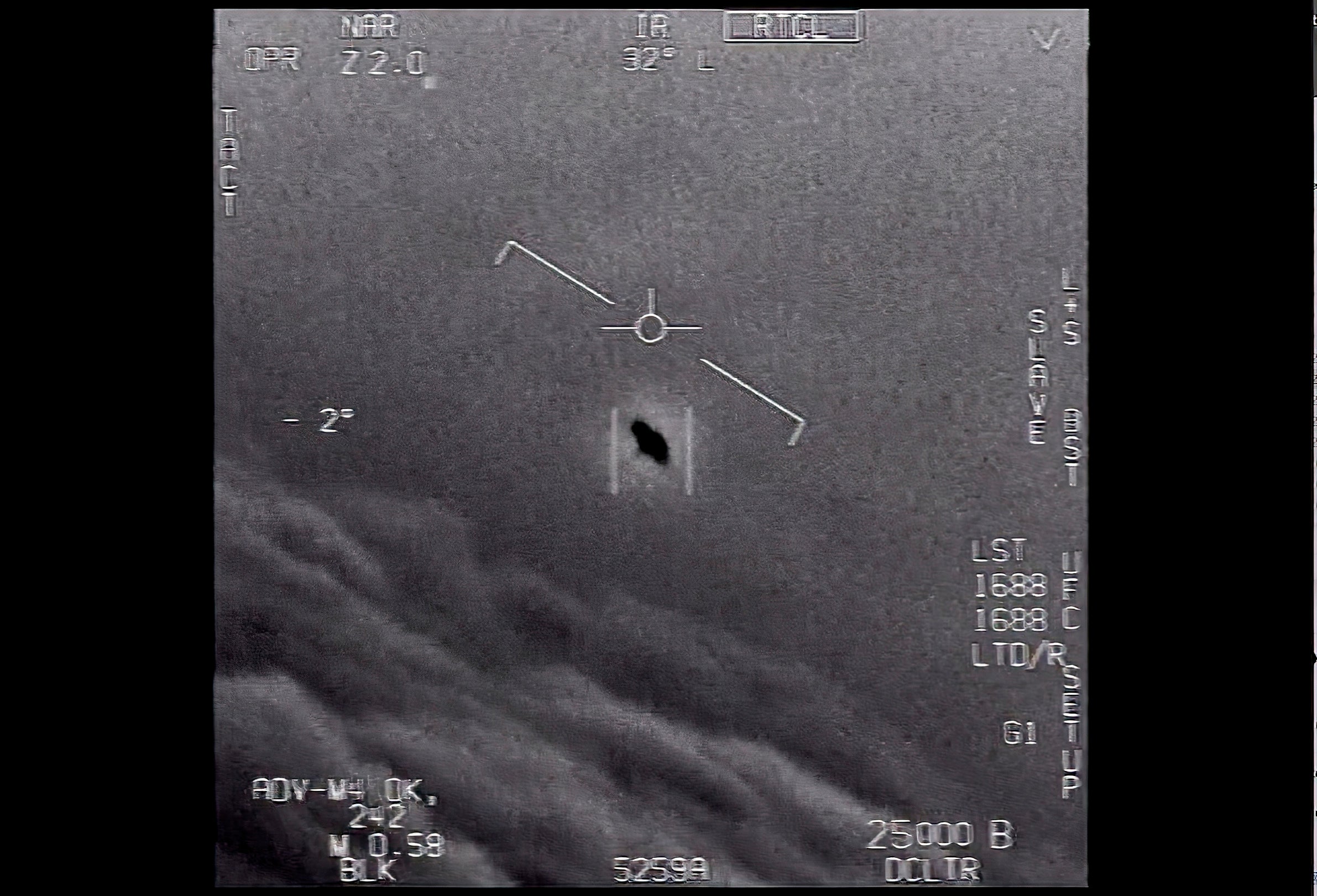 The image from video provided by the Department of Defense labelled Gimbal, from 2015, an unexplained object is seen at center as it is tracked as it soars high along the clouds, traveling against the wind. “There's a whole fleet of them,” one naval aviator tells another, though only one indistinct object is shown. “It's rotating." The U.S. government has been taking a hard look at unidentified flying objects, under orders from Congress, and a report summarizing what officials know is expected to come out in June 2021. (Department of Defense via AP)
by: ROBERT BURNS and NOMAAN MERCHANT Associated Press
Posted: Jun 4, 2021 / 11:14 AM EST / Updated: Jun 4, 2021 / 11:14 AM EST

WASHINGTON (AP) — The U.S. government cannot give a definitive explanation of aerial phenomena spotted by military pilots but has found no evidence that they are linked to aliens, according to two officials briefed on an intelligence report examining the issue.

The report due to Congress later this month examines multiple unexplained sightings from recent years that in some cases have been captured on video of pilots exclaiming about objects flying in front of them. The two people briefed on the report said it found no proof of an extraterrestrial link and does not rule out that what pilots have seen may be new technologies developed by other countries. One of the officials said there is no indication that the unexplained phenomena are from secret U.S. programs.

The two officials were not authorized to discuss the information publicly and spoke on condition of anonymity. Findings of the report were first published Thursday by The New York Times.

Congress in December required the Director of National Intelligence to summarize and report on the U.S. government’s knowledge of unidentified aerial phenomena, or UAPs — better known to the public as unidentified flying objects or UFOs. The effort has included officials on a Defense Department UAP task force established last year. The expected public release of an unclassified version of the report this month will amount to a status report, not the final word, according to one official.

A Pentagon spokeswoman, Sue Gough, declined Friday to comment on news reports about the intelligence report. She said the Pentagon’s UAP task force is “actively working with the Office of the Director of National Intelligence on the report, and DNI will provide the findings to Congress.”

The Pentagon and Central Intelligence Agency have for decades looked into reports of aircraft or other objects in the sky flying at inexplicable speeds or trajectories.

The U.S. government takes unidentified aerial phenomena seriously given the potential national security risk of an adversary flying novel technology over a military base or another sensitive site, or the prospect of Russian or Chinese development exceeding current U.S. capabilities. It also is seen by the U.S. military as a security and safety issue, given that in many cases the pilots who reported seeing unexplained aerial phenomena were conducting combat training flights.

The report’s lack of firm conclusions will likely disappoint people anticipating the report given many Americans’ long-standing fascination with UFOs and the prospect of aliens having reached humankind. A recent story on CBS’ “60 Minutes” further bolstered interest in the government report.

But skeptics caution that the videos and reported sightings have plausible Earth-bound explanations. Mick West, an author, investigator, and longtime skeptic of UFO sightings, said he supported the military looking into any possible incursion of U.S. airspace, especially by an adversary.

“People are conflating this issue with the idea that these UFOs demonstrate amazing physics and possibly even aliens,” West said. He added, “The idea that this is some kind of secret warp drive or it’s defying physics as we know it, there really isn’t any good evidence for that.”

The Pentagon last year announced a task force to investigate the issue and the Navy in recent years created a protocol for its pilots to report any possible sightings. And lawmakers in recent years have pushed for more public disclosure.

“There’s a stigma on Capitol Hill,” Sen. Marco Rubio, R-Florida, told “60 Minutes” in May. “I mean, some of my colleagues are very interested in this topic and some kind of, you know, giggle when you bring it up. But I don’t think we can allow the stigma to keep us from having an answer to a very fundamental question.”