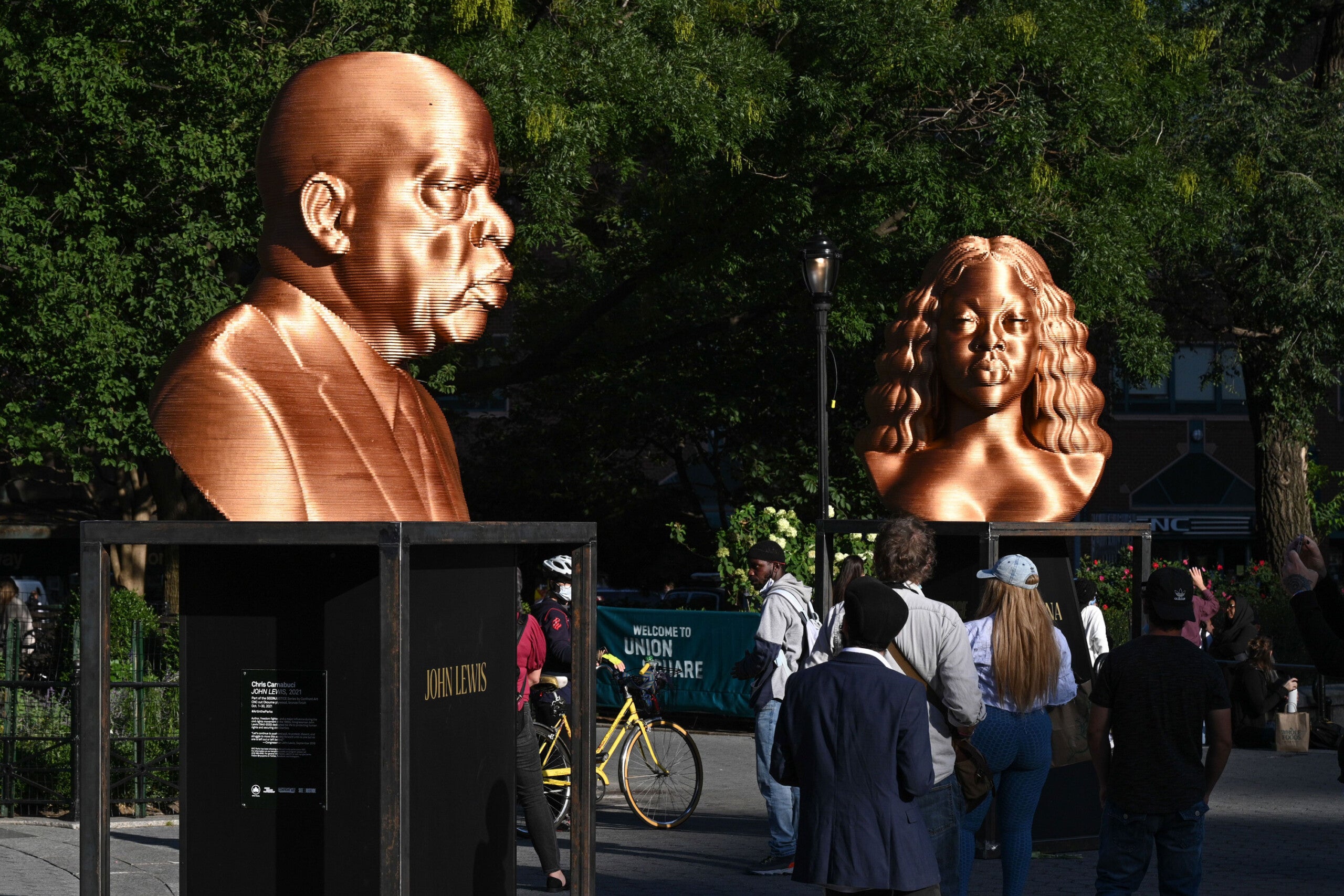 The statues, created by Chris Carnabuci, stand 10 feet tall on platforms and “honor the lives and ongoing messages through art, tying together three iconic people,” Confront Art said in a press release.

Confront Art said the “series is inspired by the events of 2020 and has empowered many to take a stand in demanding justice,” echoing the late congressman’s ethos.

“We were hoping to ignite the same passion that poured into the streets in the summer of 2020,” Confront Art co-founder Lindsay Eshelman said. “It was important to us to highlight the emerging leaders and voices of the movement.”

Carnabuci’s bust of Floyd first appeared in Flatbush, Brooklyn, to celebrate Juneteenth’s recognition as a federal holiday. The statue, made only of birch plywood at the time, was unveiled by George Floyd’s brother, Terrence Floyd. The Southern Poverty Law Center says the bust was defaced by a white nationalist hate group.

“They took ownership of the statue, not only because of the subject matter, but because for the first time someone brought a large scale public artwork to their community, which sometimes is passed over for more ‘deserving’ locations,” said Eshelman. “This is our goal. Art is inspiring. Art is a catalyst for conversation, and bringing these pieces into communities where they spark conversation and inspiration … well, then our mission with these statues will be a success. “

But Andrew Cohen, Confront Art’s other co-founder, said he’s not worried about the piece’s security in Union Square.

“We’re not scared — I don’t know what’s going to happen in Union Square: It’s exposed, but there are cameras and police everywhere,” said Cohen.

Since the bust of Floyd was defaced, Carnabuci has restored the piece. Given a plywood shortage, he used the same Okoume mahogany used on the other two statues before giving all three pieces a bronze metallic finish.

“The painting will help mitigate damage from the weather or manmade damage,” Carnabuci said. “It gives it a nice edge. Last night, when it was dark out, I saw what it looked like under artificial light for the first time: I was floored by the way it stood out.”

The exhibition marks the first time the three statues have been shown together publicly.

Eshelman and Cohen created Confront Art to “create meaningful work that will tell the story of this moment for generations to come,” their organization’s website says.

In launching the series, Eshelman and Cohen worked closely with the Floyd and Taylor families, as well as the We Are Floyd Foundation, Breonna Taylor Foundation and “The John and Lillian Miles Lewis Foundation.”

The choice of Union Square was also deliberate. In an Instagram post, the organization emphasized the site’s historical role as a “gathering space for free speech and assembly for a mosaic of all religion, race and ages.”

“We are honored to work alongside Confront Art in bringing Chris Carnabuci’s SEEINJUSTICE installation to Union Square,” said Jennifer Falk, executive director of Union Square Partnership. “As a long-standing venue for public demonstrations in pursuit of social change, we are proud of Union Square’s history as a space for New Yorkers and people from all over to congregate in the name of free speech, a legacy that we will always protect and uphold.”

Cohen says Confront Art might plan additional events at the installation on Oct. 14, George Floyd’s birthday. However, he emphasizes that Union Square is a public place and that any organizations looking to host events featuring the statues should simply do so.

“We’re keeping it open as public art in a public space,” he said. “We’re encouraging people to be there.”

“SEEINJUSTICE” will be open through Oct. 30.